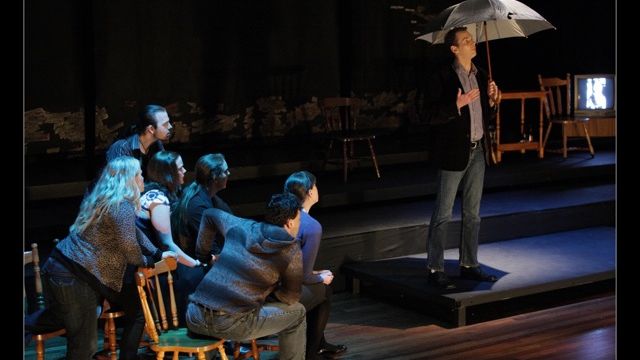 Why I staged The Laramie Project

The first time I read The Laramie Project, it was on the train coming home from work. The script was so emotive and devastating that I was almost uncontrollably crying. Quite embarrassing on a crowded train, but the impact of the story and the writing was clear.

The Laramie Project is a documentary play about the town of Laramie, Wyoming and the effect the bashing murder of a young gay man Matthew Shepard had on the town and its people. Moises Kaufman and the people of the Tectonic Theatre Project in New York travelled to Laramie and conducted hundreds of interviews over the next two years with the people of Laramie. From these interviews they created a masterfully crafted piece of theatrical non-fiction that tells the story of Matthew, and the effect his death had on the town and the whole world.

Beside the story, the structure of the play is extremely challenging, over 60 characters played by four men and four women, over three acts and three hours. The script is divided into ‘Moments’ instead of scenes and contains some challenging staging, AV and technical requirements. 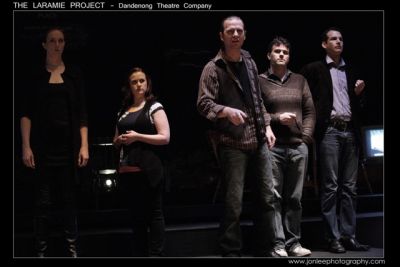 Our audition process was amazing. Open monologues from auditions made for an impressive afternoon of theatre in itself. I knew from this I was on to something.  Our eventual cast, made up of company regulars, was exceptionally balanced in physicality, and experience - a group of eight diverse and superb people, who immediately identified with the script and the characters.

With over sixty characters with multiple accents including Wyoming, Texan, African American, Latino American, New York, Californian and even Eastern European, the characterisations were challenging and extremely engaging. These were real people who experienced the aftermath of a terrible hate crime perpetrated by their own sons on a gentle and complex soul.

We keep the staging simple in design with eight chairs, a table and props arranged and re arranged on several levels. Three large black canvas backdrops displayed specific words from the script, along with multiple televisions depicting images from the event, framed the action. Additional cast from each ‘moment’ became observers of the action, not leaving the stage for the full three hours of the show.

I expected and asked for extraordinary things from the actors and crew and they delivered. It is hard to express how well the staging worked and how it developed into such a stunning and beautiful demonstration of theatrical talent and storytelling. But hey, I’m very biased. 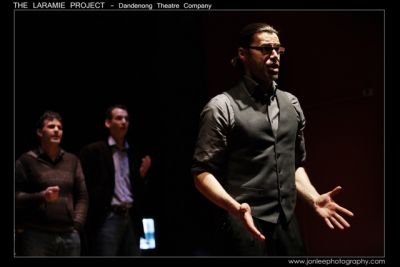 The script constantly discusses the beauty of Laramie and it was in this optimism that we found the lighting design. The colours of a blue sky, the orange of the sunset and gold of the prairie were main features in a design that included a moody subtext of darkness and rain and the harshness of blinding lights. Bold and diverse, it suited the text and the mood.

The AV design including specific images of Matthew, Laramie, and the world’s reaction helped cement the narrative while adding to the pathos.

While I was directing The Laramie Project I dreamt about Matthew constantly, this play is the voice of Matthew telling a very poignant, universal and distinctly devastating story and is one of the best most life changing pieces of theatre that exists in a modern context. It affected us on a base personal level, and we re-directed this to the audience.  The production was nominated and won multiple Victorian Drama League and Lyrebird Awards, for Direction, Production, Acting, Lighting, Set, Music and Sound. Matthew lives in the heart of this splendid recognition in a community far away from the event but not from the sentiment.