The Merchant of Venice by William Shakespeare. 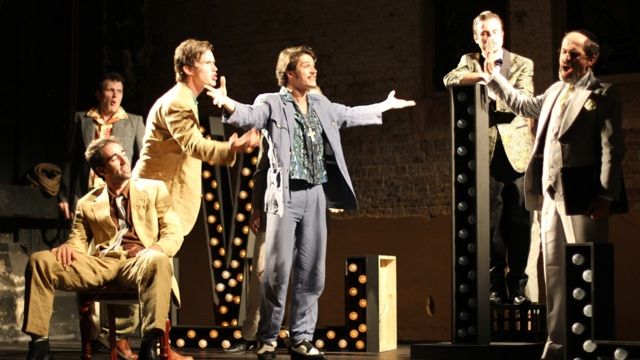 It’s a decadent, fast paced, rowdy and colourful city powered by greed. All its glitz and hedonism are rotting from within. Its sinister core of racism, judicial corruption and youthful greed propel Shylock’s inevitable demise.

At 22 I was grateful to be invited to direct this complex and problematic play.

The challenge was to balance the extreme styles and themes the play tackles. The comedy is wild and blaring and the drama is confronting, dark and poignant.

There is no middle ground in The Merchant of Venice.

Shakespeare’s characters are never two dimensional. They burst with ambiguities that must be explored and embraced. Shylock is both victim and victimiser, Portia is an enlightened intellectual and spoiled heiress, and Gratiano is both party animal and sensitive soul. 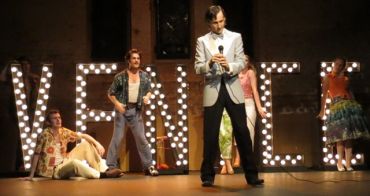 To therefore portray the racist Venetians as simply a rabid lynch mob seemed too straightforward. What intrigues me are characters who are likeable, comical, romantic, charming but have a dark side that is disturbingly prejudiced.

The clichés of a bigot in dirty overalls and Klansman by night, or a Neo Nazi street thug, are racists who are largely removed from our daily lives. But the loveable grandparent bearing racist grudges from the past, or the schoolboy telling a sinister racist joke on the playground are familiar sights. These are the racists that we encounter - people who harbour both redeemable and irredeemable qualities.

The Venetians express their Anti-Semitism as boldly as they laugh, love and frolic. 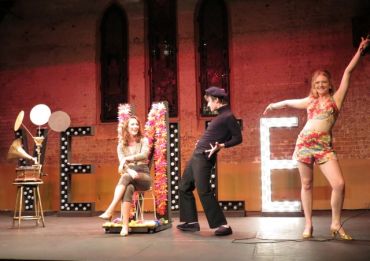 Shakespeare is inherently heightened and exaggerated. I avoided the idea of small naturalistic performances and concepts. The plays had to be big and bold to compete with the raucous noise of the audience.

For the manic and farcical comedy to work the cast had to be willing to look silly on stage, to make fools of themselves, for even the most ridiculous choices, when acted with total conviction, succeed.

There is nothing safe about theatre. It is alive and can implode at any minute. A film’s final cut is locked in, a record is pressed and played endlessly, a painting is eventually signed and framed – but the theatre lives and dies night after night. So too must the actors throw themselves in this dangerous world, and live or die by the sword that is a live show.

So I implored my cast to make a leap of faith. The character range includes a stand-up comedian, a senile Supercentenarian and his Brooklyn nurse, a hedonistic party animal and an exotic magician. At times they break into dance routines and sing spontaneously. It’s all very boisterous. But these daring choices make a show worthwhile and memorable rather than being simply competent. 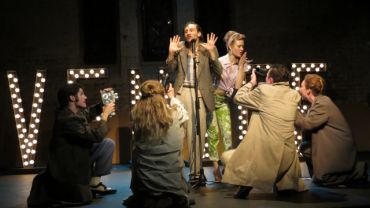 I wanted the set to storm the audience away into a world that is glitzy, exaggerated and collapsing.

Set designer John Harrison and I sought to embrace the inherent character of the Genesian theatre. The theatre was once a church and the back brick wall of the stage features three gorgeous stained glass windows – we exposed them.

There is a sense of age and gritty decay emanating from the weathered walls. This creates the perfect feeling of Venice as a crumbling city.

Against this naked brick set we built two metre high letters spelling V-E-N-I-C-E and filled them with light bulbs. The effect is like a gigantic casino sign or the 1968 Elvis Comeback Special.

We rediscovered the function of these letters in the second half to convey the city’s demise. We toppled and found new uses for them. The ‘I’ becomes the Duke’s podium, the ‘E’ is overturned and used as a stool, and the toppled C becomes a courtroom desk. 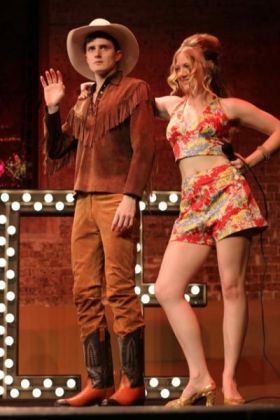 Alice Joel’s costumes are an exciting element of the show. Stripping back the set meant the costumes needed to be electric and needed to fill the space.

Character is revealed subtly and they look genuinely hip – something that is difficult to pull off without reverting to clichés or heavy handedness.

I love this difference of opinion.

Our intention was to create a world that was familiar, but unable to be specifically pinned down to a certain time. This is important, as our Venice is not a real place. It’s a warped fairy tale that is both relatable and distant.

The flashing V-E-N-I-C-E sign was fun to experiment with. At times a single letter lights the actors, other times the letters flare and swallow the stage in light.

The lighting ventures to the surreal at times. The more bizarre characters evoke a cartoony mood and the lights flash and flare as their hurricane of comedy whips around the stage.

But by the time we reach the devastating trial scene, colour is drained from the palette. Characters are side lit and shadows spill across the stage. It’s stark, menacing and cold. 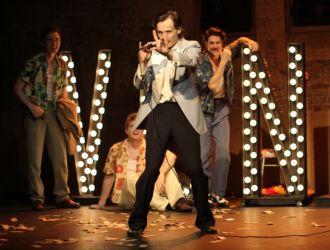 Working with a master of his craft like lighting designer Michael Schell was an incredible joy. His wealth of experience and skill meant I could let my imagination run wild and we could push ideas without feeling too limited.

Contemporary western society is a mass of contradiction. Extreme wealth and extreme poverty exist side by side. Xenophobia is still a potent and destructive force.

Love still prevails as a joyous and unifying phenomenon, but it is Shakespeare’s message of undying relevance and simplicity that makes The Merchant of Venice timeless:

All that glisters is not gold…

I’m constantly fascinated by the working lives of artists. Franz Kafka worked in insurance, Chekhov was a doctor and William Golding was a teacher. I like to think about how their work affected their art.

I work as a fishmonger.

Extreme work hours, handling disgusting guts and innards and dealing with difficult customers is incredible training for a director. I’ve learned an invaluable amount about character and human behaviour from the stories of gristly Greek filterers and Nepalese trolley boys. 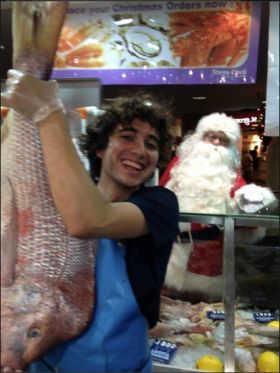 Being shoulder deep in murky water unclogging a floor drain humbles you.  Gutting boxes of fish all day gives you an insight into the grotesque, the absurd and the tedious.

With over twelve-hour work days being the norm, theatre (whilst hard work in a different way) is a world I can sink my teeth into with a sense of release.