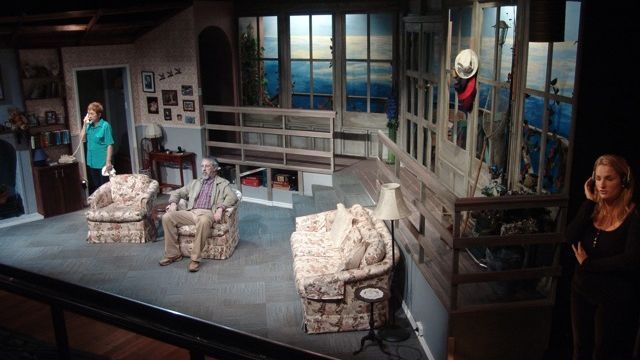 Why I staged it.

It was the script of On Golden Pond that got me in! Not any memory of the movie – that was a long time ago anyway – but the brilliant writing and the skilfully and carefully developed characters, made the script come to life on my ‘mind stage’ as I read. Such natural dialogue – real, economic, clever – letting the characters relate in a way that families do, with pathos and humour, angst and irony. Not lingering too long, yet long enough for audiences to identify and sympathise, and move on. Just as families do! It is a sensitive, compassionate story about family and the ties of time that bind a long term relationship. I was delighted to have been asked to direct this play!

Mounting a play that was such a memorable movie, it is important not to let the movie invade the production. The fact that Thompson himself directed a revival of the play on Broadway in 2006, with an African American cast (James Earl Jones and Leslie Uggams), and that it received Tony Awards for Best Revival and Best Actor, gave me heart. Obviously contemporary American theatre-goers still connected with the themes and the characters, and it seemed they had a cross-cultural appeal. Perhaps our local Sydney audience would find the same! 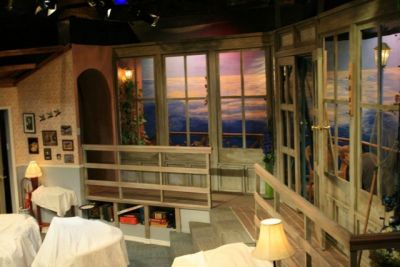 Firstly, to find a set design that would answer all the demands of the action: a long established, comfortable holiday house; overlooking a lake; at least three entries on two levels. A house the cast believed in, where they could look out on the lake and its moods, its wild life, its comings and goings. A tall order, true! But after a happy three hour meeting with the set designer, the set builder and the lighting designer, I knew we had a design that would not only answer the requirements of the script, but bring the play into the present, and give the cast a place they could really call home for the next few months. The beauty of working at Hunters Hill Theatre is that a play begins rehearsals on the stage as the set emerges. And because we were building and painting during the Christmas holiday period, the basics of the set were there almost from the beginning.

Another nice thing about Hunters Hill Theatre is the tradition of a reading of the play in the week before auditions. This is an open night for members and those who might be interested in auditioning. It is always fun – and in this case revealed a healthy interest from actors in all the ‘needed’ age categories. This was most heartening! If only they would all come to the audition! They did! It was a most interesting audition, with talented people who portrayed the roles, and some improvisation of the roles, with insight and sensitivity.

And so we had a cast.

Rehearsing over the Christmas period meant that we needed to break the rehearsals into scenes that fitted in with holiday plans, but this did not present any real problem except for the person (me!) who worked out the schedule. Once that was done, we worked on specific scenes and characters, trusting that they would get together as a whole once the cast members were all back in Sydney – and Australia – again. The fact that Ethel and Chelsea, the mother and daughter of the play, were actually mother and daughter in real life, and that they were travelling to New York together, was a bonus! They could learn lines in the plane, rehearse their accents in hotels and theatres and stores – and bring us back some the local and regional newspapers needed as props! The American phone we needed was an e-bay find! 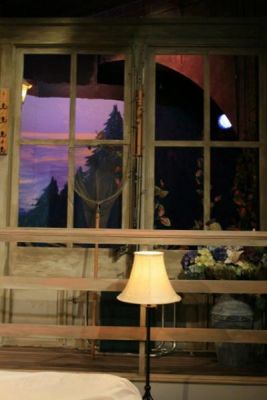 Finding the way into the characters in a play such as this can be hard. For Norman and Ethel, the protagonists, the journey of the play is a micro-journey of their 48 years together. Norman at 80, is a crusty old curmudgeon who is increasingly preoccupied with thinking about his age and the infirmities he is beginning to feel. Ethel, at 69, is his foil – cheerful, energetic, gregarious, but concerned about Norman’s preoccupation with Death.

For the actors, these two characters present many challenges and much courage, not the least of which is the weight of lines. They need to find the pattern of their long relationship and establish the way they have learnt to deal with each other, as well the physicality of the roles, especially as the actor playing Norman had to ‘age’ 25 years!

The other characters – their daughter, her new partner, his 13 year old son and the only ‘local’ New England character, Charlie, the long-term mailman – are cleverly drawn through their relationship with Norman and Ethel. Charlie they have known for years. He is the butt of Norman’s constant barbing but remains delightfully and naively buoyant and cheerful.

Chelsea, who has suffered long from her father’s ridicule, carries the hurt and resentment of the past into the present, in some scenes which, though short, are incredibly challenging and emotionally demanding for the actor, especially as she needs to balance them with the hope and warmth of her new relationship.

Bill, ‘the boy friend’ and his son, Billy, provide new anchors for the family –some comic relief – as they move into the next phase of their journey. Our 16 year old actor playing Billy hailed from the local state high school. What a joy to work with a young person who is so mature and talented.

The scenes did come together! The experience and commitment of the actors led to a tight ensemble that was supportive and worked well and hard together – not only as actors, but, as happens so often in community theatre, as builders as well. To have some actors who are also handy with saws and power tools and staple guns, and prepared to give up more of their precious time to work alongside other volunteers on the set, is a godsend to a director and set builder and bonds across the production and the company. How lucky I was to have such people!

It was a mighty build, but the result was remarkable. Down stage was the main acting space – the living room of the house, with the front door, a sofa and two armchairs (one of which was on a swivel, allowing Norman, when seated, to continue to try to ‘control’ conversations), a photo wall, book cases, a phone and a fireplace, as required by the script. From it, stairs led to a narrow ‘split level’, leading to the ‘rest’ of the house (off stage right), and through double doors and the ubiquitously breaking screen door (a real challenge for the set builder!), to a balcony overlooking the lake and a ramp to the boat dock (off stage left). 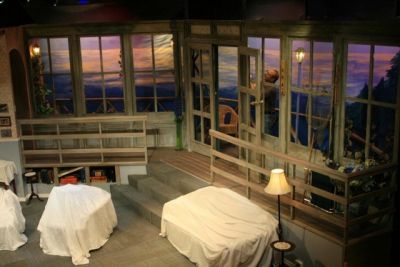 The lake itself was a beautifully painted cyclorama, which wrapped around the back and one side of the stage and provided a wonderful backdrop for the time changes of the scenes, which were emphasised by clever and carefully timed lighting effects. The lighting design was integral. The fact that the lighting designer also constructed the set and designed the sound was a great bonus. There was a real understanding of the technical requirements of the play as well as the ‘moods and moments’. On Golden Pond has many of these and the action and effects merged seamlessly.

In the 2006 revival, Thompson wrote in the ‘other side’ of two telephone conversations omitted from the original script. These conversations were so funny (the operator) and poignant (Chelsea, Bill and Billy back in Los Angeles), and so integral to the action at the beginning and end of the play, that it seemed wrong just to use voice-overs. So a small stage, in front of the apron stage right, and attached by hinges to the side of the auditorium became the ‘telephone stage’. It was put down by a crew member before the two ‘telephone’ scenes and replaced by the actors after each scene. It was easy to manage, did not infringe on the auditorium, created a sense of distance with the help of clever lighting, and allowed these lovely little scenes to be seen as well as heard.

The action did come together. The set worked beautifully. Our Stage Manager, crew and lighting and sound operators supported the cast in every possible way. What a pity a play has to end!

Cast (In order of appearance)

Originally published in the May / June 2011 Print Edition of Stage Whispers. 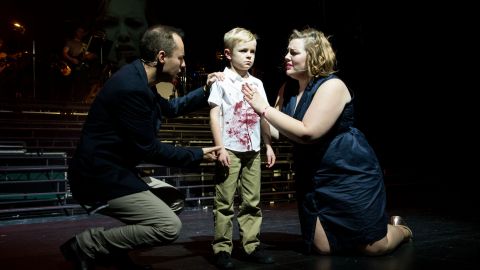 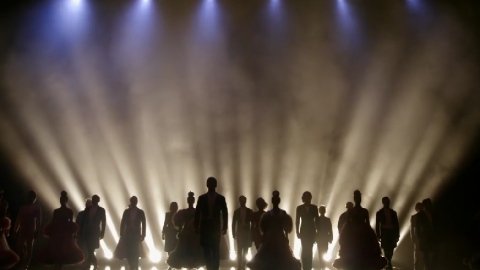 A Year in the Life of a Stage Manager.

Performing Arts courses have no trouble attracting thousands of would be actors and singers to audition, but ... 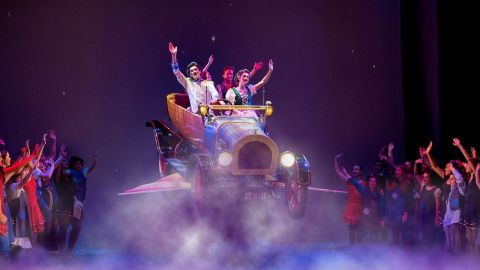 Not For The Faint-Hearted

Gone are the days when the amateur musical circuit could be considered repetitive and stagnant. Brave companies are takin ... 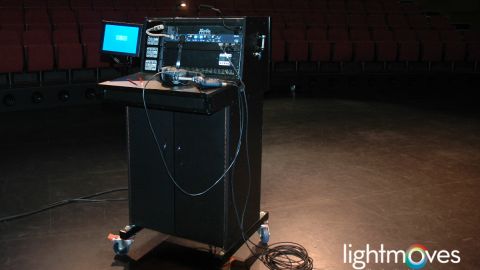 Stage Management: The Glue that Holds a Production Together

By Marcus Pugh from Resolution X Once the curtain opens, the most important person in ... 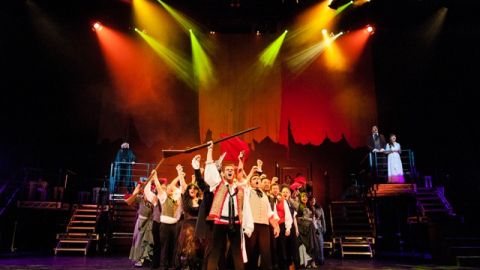