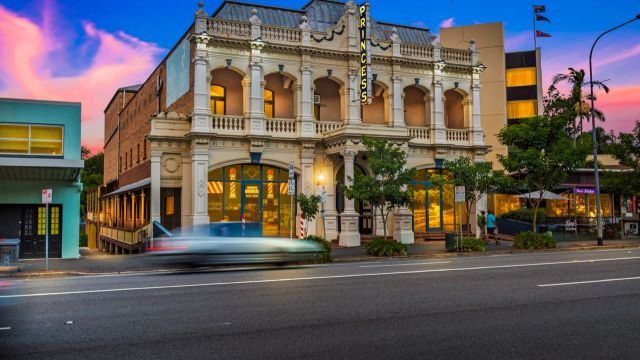 The Princess Theatre in Annerley Road, Woolloongabba, is Brisbane’s oldest surviving theatre. Built in 1888 for prominent solicitor Phillip Hargrave, and designed by architect John Beauchamp Nicholson, it is a two-storeyed rectangular brick building with a narrow laneway to the rear and on either side. The main frontage is 20m with two shops separated by the main entrance. A wooden staircase leads to the first floor and dress circle with six rows of tiered seating. The seating capacity is 500 including the balcony.

Named the Princess Theatre in 1893, it was used sporadically for live performances and vaudeville. In the 1930s it was home to local fledgling theatre groups including Brisbane Repertory Theatre Society (now La Boite Theatre Company) and the Brisbane Arts Theatre. During the Second World War it was the administrative and rehearsal centre for the Entertainment Unit of the American Armed Forces. From 1948, it was sublet to small businesses. 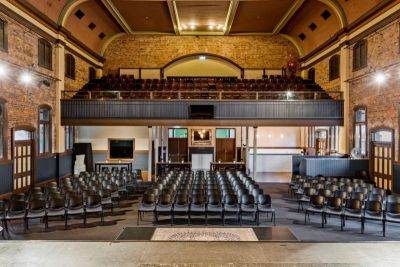 In 1986 the venue was refurbished with seats from the demolished Her Majesty’s Theatre and a flying system from the Paris Theatre. The newly decorated theatre was leased to TN! Theatre Company, which re-opened it with a production of Noel Coward’s Design for Living, and followed with eclectic seasons of plays that included Tartuffe, Hedda Gabler, and A Butt in the Hand is Worth Two in the Borscht.  The company folded in 1991.

The theatre was sold to current owners LifeCity Church in 2003 for church services and independent hire. A Griffith University Musical Theatre production of Rodgers and Hammerstein’s Carousel appeared there in 2013, whilst the local musical Flaws and All played there in 2017. 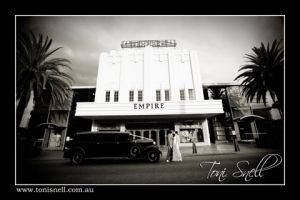 The crown jewel of Queensland’s regional theatres is Toowoomba’s Empire Theatre. It opened in 1911 as “Empire Pictures” but a fire in 1933 destroyed most of the theatre except the northern and southern walls. These were incorporated into a new theatre built on the same site in Neil Street later that year. Built in the detailed art-deco style popular at the time, it had a seating capacity of 2,400. It had European-styled diffused lighting, the acoustics were excellent and it contained one of the largest provincial stages in Australia, attracting all types of performance from vaudeville to opera.

Edward Gold, the theatre’s chief electrician and founder of 4GR Toowoomba, was responsible for the most striking of the interior features: the illumination of the grand proscenium arch in constantly changing colours. The local press claimed the theatre employed the most extensive use of diffused lighting in any theatre in the British Commonwealth.

The theatre became the home of MGM movies during the thirties, screening films featuring Greta Garbo, Clark Gable, Jean Harlowe and the Flash Gordon serials. Popular favourites during the forties included musicals with Fred Astaire, Judy Garland and Gene Kelly, and in the fifties, after a CinemaScope screen had been installed, Seven Brides for Seven Bothers. 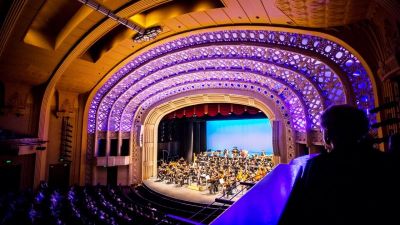 The last film to screen was in 1971, and after that the theatre fell into disrepair until the Queensland Government bought it in 1975 for a TAFE facility. Toowoomba City Council bought it in 1997 and restored it to its 1933 art-deco styling with state-of-the-art technical equipment and patron comforts. The orchestra pit can be hydraulically raised to audience floor or stage thrust levels.

In 2005 a Conference Precinct extension was built to connect the Theatre with the adjacent Church Theatre (circa 1879), incorporating a 5-star restaurant, foyer and storage areas. The current capacity is 1,565 seats, making it the largest proscenium arch theatre in regional Australia.

In recent years the theatre has hosted the Queensland Ballet, the Australian Ballet, Opera Q and Queensland Symphony Orchestra. It is the home for Toowoomba Choral Society productions, while Heritage Bank and Empire Theatre annually present a major musical. Previous productions have included Wicked, The Boy From Oz and Mary Poppins, while next year Kinky Boots will be staged after a major refurbishment of the auditorium and foyers. 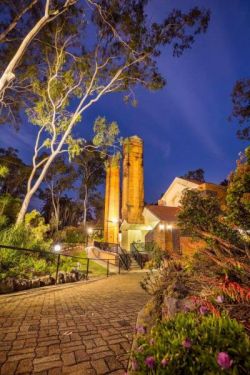 One of Queensland’s most unusual and distinctive theatres is Ipswich’s Incinerator Theatre. Situated in Queens Park, Ipswich, it opened in 1969, converted from a 1936 refuse incinerator designed by American architect Walter Burley Griffin, famous for the design of Canberra and the Capitol Theatre in Melbourne.

During the Great Depression, work for architects was severely reduced and Griffin, and his partner Eric Milton Nicholls, gained the bulk of their work from designs for municipal incinerators. These used the reverberatory system patented by Australian engineer John Boadle. The Reverberatory Incinerator Company constructed twelve incinerators in the Eastern states, all of distinctive design, but only seven are believed to have survived, none of them as incinerators.

In 1969 the Incinerator was converted into a theatre seating about 80 people. The conversion was affected by using the chimney end of the building, previously thought of as the rear, as the entrance. Engineer Ian Pullar, a member of Ipswich Little Theatre, carried out the design and planning. Changes made to affect the conversion included adding an entrance balcony with removable railings, toilets and changing rooms, fire escapes and a covered outdoor area. A rubbish hopper was removed to create a stage area and scenery tower, while the space previously used for machinery was converted into an auditorium.

Currently the Ipswich Little Theatre Society has a twenty-year lease. Like most community theatres they program five productions each year, a mix of dramas, thrillers and comedy. 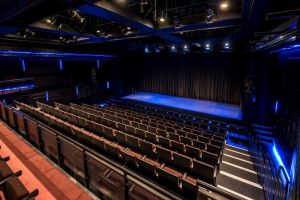 The Queensland Performing Arts Centre (QPAC) is the most successful arts complex in Australia and during the last financial year achieved its highest attendance on record with a total attendance of 1,573,582.

The complex sits on the South Bank site previously occupied by the Cremorne Theatre, which opened in 1911 as an open-air theatre seating 1,800, with a tan bark floor and seats arranged in a semi-circle. It first operated as a variety and vaudeville house, then later in 1934 MGM extensively remodelled the auditorium, roofed it and leased the theatre to show films until 1940 when the theatre returned to vaudeville. It attracted stars including Roy Rene (Mo), Will Mahoney, George Wallace and Evie Hayes. The venue was destroyed by fire in 1954.

When QPAC opened in 1985, one of its three theatres was named the Cremorne. It currently seats 277 people in a space that can be converted from a traditional proscenium arch style to theatre-in-the-round, concert, cabaret, cinema or flat floor mode. 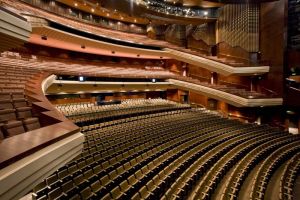 The largest of the theatres at QPAC is the Lyric. It’s a traditional proscenium-style theatre which can seat up to 2,085, with 1,053 in the stalls, 522 in balcony 1, and 510 in balcony 2. The orchestra pit seats up to 90. Large musicals like The Phantom of the Opera, Wicked and Priscilla Queen of the Desert – The Musical grace the Lyric stage, but it is also used by the Queensland Ballet and Opera Q for their subscription seasons, and hosts QPAC’s International Series, presenting major ballet companies from around the world. In 2018 it’s Teatro alla Scala Ballet in Rudolf Nureyev’s Don Quixote and Giselle.

The Concert Hall is more geometric in form. Its focus is the Johnstone River Hardwood concert platform. Above and behind it sits the magnificent Klais Grand Organ, which has 6,500 pipes on display. It was made in Germany by Johannes Klais and Co. of Bonn. The walls of the hall are panelled in Queensland Walnut and against the walls are suspended platforms that form acoustic shelves, while behind the timber fretwork are quilted curtains which can reduce reverberation time from the normal 2.1 seconds to 1.8 seconds. It seats 1,600, but increases to 1,800 if the choir balcony is used. The Concert Hall is home to the Queensland Symphony Orchestra and the Queensland Pops Orchestra. 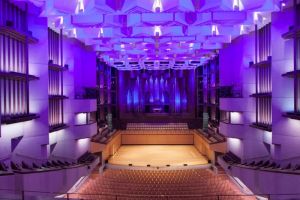 The centre also includes a fourth theatre, the Playhouse, which opened in 1998 - a proscenium arch theatre that seats 860. The venue is mainly used by Queensland Theatre, Expressions Dance Company, Bangarra Dance Company, Circa and Shake & Stir. It’s also the venue for touring plays and mid-sized musicals.

In May 2018 the Queensland Government announced a new theatre for the complex, to be built on land beside the Playhouse. It will feature digital and technological advances available in new theatre infrastructure and is expected to open in late 2022. 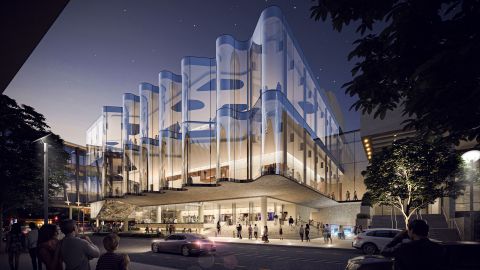