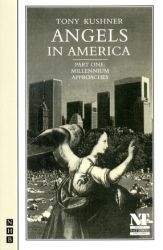 by Tony Kushner
Part One of the two-part Angels in America, Tony Kushner's epic drama set during the Reagan years in America - now recognised as one of the greatest plays of the twentieth century.

Prior, visited by ghosts of his ancestors and abandoned by his lover after his diagnosis with AIDS, is wondering if he is still sane when the angels select him to be their prophet. Powerbroker Roy Cohn also has the virus - but he believes that only the powerless can have that particular illness, and so kicks back against his diagnosis.
In the 'melting pot where nothing melted' of modern America, the nation's reaction to the sickness – and its sufferers – is laid bare.
Millennium Approaches was premiered in May 1991 by the Eureka Theatre Company, San Francisco, directed by David Esbjornson. In London it was premiered in January 1992 in a National Theatre production at the Cottesloe Theatre, directed by Declan Donnellan.
The play received many awards, including Best Play at the 1992 Evening Standard Awards, Best New Play at the 1992 Critics' Circle Awards, Best Play at the 1993 Tony Awards and the 1993 Pulitzer Prize for Drama.
ISBN: 9781854591562