DEATH AND THE MAIDEN 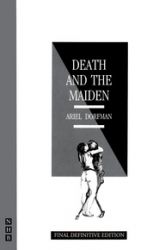 A classic of 20th-century theatre, Ariel Dorfman's Death and the Maiden ran for a year in the West End, was a hit on Broadway and was filmed by Roman Polanski starring Ben Kingsley and Sigourney Weaver.

A woman seeks revenge when the man she believes to have been her torturer happens to re-enter her life.

Death and the Maiden was given a first reading at the Institute for Contemporary Art in London in November 1990. After a workshop production staged in Santiago, Chile, in March 1991, the play had its world premiere at the Royal Court Upstairs, London, in July 1991, transferring to the Main Stage at the Royal Court in October.

The play then transferred to the West End, at the Duke of York's Theatre, in February 1992.

Death and the Maiden won the 1992 Olivier Award for Best New Play.