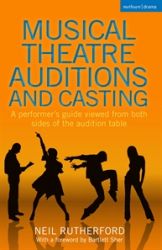 by Neil Rutherford
This book provides a unique perspective on the musical theatre audition process from the viewpoint of one of the most influential casting directors in the West End who has also worked for many years as a professional actor.

Musical theatre is a tough and over-crowded industry. Yet, despite the huge competition, many performers find auditioning difficult with little knowledge of what the directors, creative teams and producers are looking for, or how to win the panel over with their unique talent. As a leading international casting director, Neil Rutherford has seen thousands of hopefuls audition over the years. Uniquely, he also understands what it is like to audition from his years as a professional actor in musical theatre.
This book provides a unique perspective on the musical theatre audition process and how to improve the chances of landing a role. With wit, humour and insight, Neil Rutherford guides the reader through the crucial elements of musical theatre auditions, opening up the process of casting and auditioning to the thousands of hopefuls trying to secure work in this industry every year, as well as anyone involved in musical theatre. With a foreword by Tony-award-winning director Bartlett Sher, the book also contains contributions from some of the world's leading directors and musical directors, including Sir Richard Eyre and Jerry Mitchell, adding further valuable insight from those at the centre of the musical theatre world. This book is a vital tool for anyone hoping to improve their audition chances and survive in the world of musical theatre.

Originally an actor playing roles in London's West End, Neil Rutherford worked in production at the English National Opera before becoming Head of Casting for the Ambassador Theatre Group. In addition to his professional casting work worldwide, Neil regularly lectures in audition technique at major UK drama schools and events, holds masterclasses throughout the world, and has been an audition panelist, contributor and advisor to Channel 4, the BBC, ITV, BBC Performing Arts Fund, The Actors Centre, Spotlight Actors Publications, and numerous drama schools in the UK. neilrutherford.com