Anything Goes at Miranda 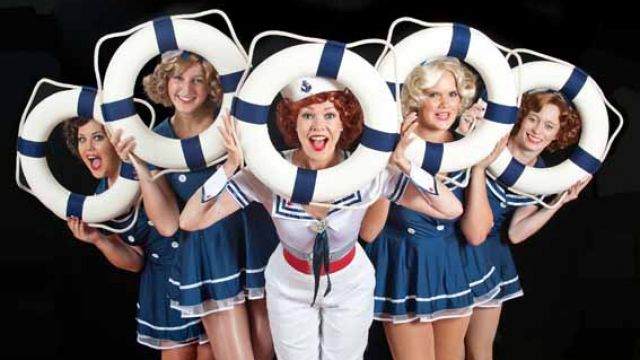 No musical puts the age-old tale of boy meets girl, and the complications which ensue, on stage better than Anythng Goes. Set in the early 1930s, this musical comedy is packed with disguises and mistaken identities and - eventually - four happy couples!

The song and dance musical follows the madcap antics aboard the cruise liner SS American as young Billy Crocker discovers true love in the form of gorgeous heiress Hope Harcourt. Throw in a second rate gangster disguised as a priest, an overbearing mother, an evangelistic nightclub singer and a wealthy New York businessman.

Anything Goes features a swag of timeless Cole Porter tunes, such as 'I Get A Kick Out Of You', 'You're The Top', 'Its De-lovely', ‘Friendship’ and title song, ‘Anything Goes’. The S.S American sails into the Sutherland Entertainment Centre for a limited season in March.

Playing the role of Reno is Roslyn Howell (pictured right), a professional make-up artist (trading as Rozlyne Vidal) who joined MMS last year after having a ball helping the cast with make up for the production of Cats. Her first role with the company was Sheila in A Chorus Line last September

Living in Paris for 10 years, Roslyn had a successful recording career. As “Rozlyne Clarke” she recorded 2 Albums, 12 Singles, and several No# 1 hits in Europe. She supported Boy George (Tour of France).

Anything Goes is Roslyn’s second show performing with MMS and she is thrilled to be cast in the brassy role of Reno.