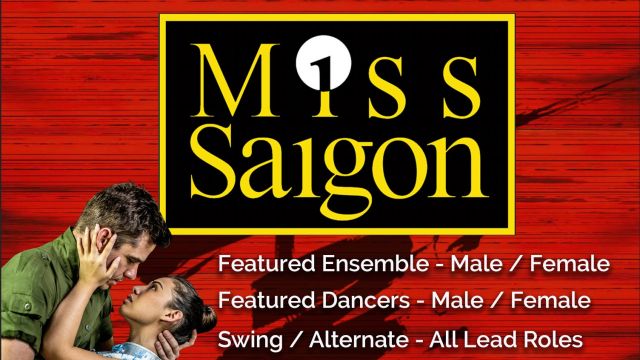 A debate has erupted on social media about whether it is still appropriate to stage the musical Miss Saigon. The debate was sparked on the Sydney Musical Facebook page when the Notable Theatre Company announced its audition for the musical.

Here are some of the views that have been expressed. Leave your comments on the Stage Whispers Facebook Page.

“Miss Saigon is famously racist and misogynistic and enforces a narrative about a southeast Asia politically and sexually subservient to white supremacy. In the wake of the Atlanta shooting, this level of insensitivity towards the violence experienced by Asian women is astonishing.

I would encourage you to not support this production, and contact the organisers asking for an explanation. I don't want something like this to be acceptable. Miss Saigon represents a deeply pro-American, white supremacist viewpoint, which is the killer's perspective, not the victims. Asian women are not sex objects from a distant land, to be exploited and discarded, and have that pain put into entertainment without critique.”

“Yes. It's an important musical theatre document of the 1970s. Fifty years ago.

Yes. The White/Asian divide was at an uninformed stage. Yes. Racist.

But should we 'disappear' an important document of historical music theatre because it reveals very uncomfortable truths?

Surely those 'uncomfortable truths' are a pathway to further learning, further acceptance, further empathic understanding about the here and now.”

“Thank you for raising these issues. I was in two minds about auditioning as there are not many parts for Asian minority groups and thought it might have been a good opportunity for myself. A good conversation starter on race and the theatre”

“I disagree with your assessment that the show is racist, misogynist, and reinforces the US/Asian divide.

The show definitely shows those things, but just because it shows racism etc doesn't mean it is racist (etc). These things are shown only to condemn them and to paint a picture of how times were. The lyrics bear this out.

It's the only major musical to have ever criticised America's (and the Western world's) treatment of the Vietnamese and the Vietnam War, and of Asians in general, in particular the women.

We can't deny, soften, or whitewash dark periods in history just because it angers us. None of my Jewish friends ever want to see a "culturally sensitive" depiction of the Holocaust and would be insulted if so.

Miss Saigon can be a powerful educational tool if done the right way (and yes, there are the ignorant directors/production teams who don't "get" it, and think only of the helicopter, the "sexed up dancing girls", and the love story).

Having said all that I fully support your right to ask the questions you want to ask."

“Theatre and art are a medium through which to convey stories and discourse, provoke thought and improve the lives of people and communities.

Noteable Theatre Company is due to stage Miss Saigon in July 2021.

Planning for this production commenced in 2019, prior to the postponement of the production from its original date of July 2020 to July 2021 due to the impacts of COVID-19.

Miss Saigon is a performance work that provides a representation of events that occurred during the Vietnam War era.

The Director and production team’s vision for this production fundamentally is to stage the work with dignity and empathy.

Open auditions were undertaken, and the original casting undertaken was diverse, and culturally sensitive to the content of the production.

Open auditions are currently being undertaken to cast additional ensemble and principal understudy roles, as well as to replace cast members who are no longer part of the production due to other commitments.

Rehearsals have not yet re-commenced, and pre-production planning is in its initial stage.

With the production process now commencing, the production team will be taking further steps to consult and engagement with representatives of the Vietnamese Community to seek input to the staging of the production in a culturally-sensitive way.”