Chase Me, Comrade! in Wyong 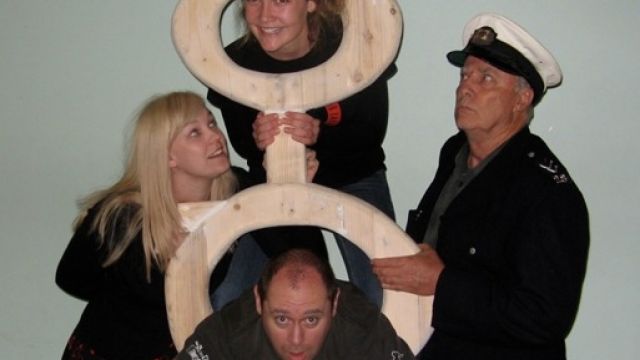 Chase Me, Comrade! is the November production for Wyong Drama Group, on the NSW Central Coast.  The Ray Cooney farce, inspired by the true story of Rudolph Nureyev’s defection to the West in the 1960s, was first performed at The Theatre Royal, Windsor, in 1964 with Cooney playing the lead role of Gerry Buss. During its three-year London run it is alleged that Nureyev himself saw the play several times and laughed as much as the rest of the audience.

Holding a top secret post in the Ministry of Defence, Commander Rimmington, of Her Majesty's Navy, must watch appearances and is not always pleased by the carryings-on of his impulsive daughter, Nancy. Her latest escapade begins when her friend, ballerina Alicia Courtney, arrives breathlessly to announce that the great Russian dancer, Petrovyan, has decided to defect to the West - and that she has smuggled him out of London. The first question is how to distract the Commander while Petrovyan is sneaked into the house. After the Commander goes off fishing, the problems really begin to mount. An official appears with a coded message for the Commander and, in an attempt to get rid of him quickly, the Commander is impersonated by Nancy's fiance, Gerry Buss. As they try to hide Petrovyan, the trumped-up stories and assumed identities mushroom hilariously, while agents from the Russian embassy lurk outside in the bushes, the local constable blunders in at the wrong time.