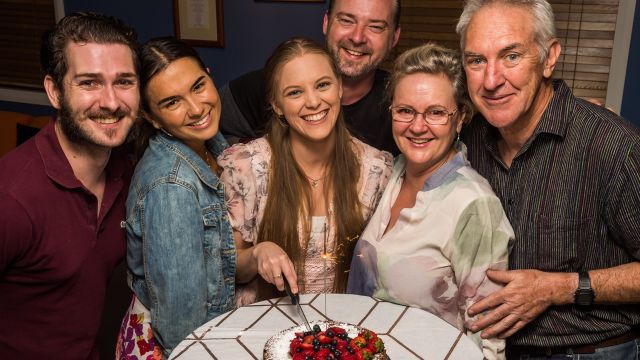 The play: Andrew Bovell’s Things I Know to be True

The Director: Me! (Carol Wimmer).

In a less tumultuous world, this production of Bovell’s beautifully crafted play would be opening on 27th March. That would be the culmination of weeks of careful planning and over three month’s work for six dedicated actors, a proud director, a busy stage crew, a creative design team, the construction of a beautiful set – and an orchestra of twenty-two young people who had recorded a stunning piece of music composed by their talented conductor. It would be the first community theatre production of this play in NSW. The pressure was on. The 19th of March was the penultimate rehearsal before our first preview.

Alas it was not to be! Like many productions across Australia – and the world – we fell victim to the evil Coronavirus that had crept quietly and viciously across the seas.

To stem its virulent spread, the government directed many venues to close. The far-reaching effects would be devasting – for theatres, companies, actors, creatives, technicians, administrators, front-of-house staff, cleaners … and playwrights. For small community theatres like the Pavilion, that seats 150 and produces six plays a year with no funding other the tickets bought by its very loyal patrons, those far-reaching effects are almost unfathomable.

But what of the immediate effect? What happened? How did we feel? What’s happening now?

I guess the way we felt was similar to other casts and crews – but sharing those feelings might be a way to reach beyond the dark stages, empty wings and quiet green rooms …

As I said, that Thursday night would have been our second last rehearsal. The set was finished, complete with a symbolic tree! Even the floor was painted. Our tech rehearsal had gone well. The sound and lighting designers had complemented the poignancy of Bovell’s themes. The cast had been ‘dress rehearsing’. The prompt had been spirited away. The stage manager had every prop and cue in hand. The program had been printed …

Then, on that fateful Wednesday, the plug was pulled! We knew it could … might … would … come. And now it had! How to tell the cast and crew? What would we do? Many phone calls later it had been agreed that, instead of our last rehearsal, we would meet the next night at 7.30 as planned for a ‘socially distanced postponement party’. It would be an opportunity to commiserate, to take home make up and costumes, and to hear the final decisions of the Management Committee, who were meeting an hour beforehand.

It was 7.30! Most of us were there! A bottle of bubbly was at hand! We knew by then that the play would be able to be staged later in the year with the permission of the playwright’s agent. We knew that one or two of the cast might not be available but that shouldn’t be a problem. We were as bright as could be expected under the circumstances.

In the foyer of the theatre, the Management Committee was winding up serous deliberations – and the cast of the next play was about to be told that, instead of a rehearsal, their play would, sadly, be cancelled and, hopefully, moved to a later date.

So much to be sad about. Our lovely play! And the awful scourge that was causing so much illness, so many deaths and such confusion and upheaval.

Then the President of the company came in and asked to see me. Did I think the cast might like to ‘go on’ for the seven members of the Management Committee? Did I? Would they?

I did! And they would!

Once they got over the initial panic, the adrenaline kicked and by 8 o’clock they were dressed, made up, the crew and the operators were ready and our little audience was socially distanced around the 150 seats in the theatre. The lights went down and the beautiful, sad music that had been composed especially for the production trickled over the audience.

In that last rehearsal the cast gave a very special performance. The pace was perfect. The tension was edgy. The emotion was heart-breaking. The audience was emotional. And I was very proud!

Later, the green room was empty. Next day the SM and I packed all the props carefully away in plastic crates. The garden furniture we moved on to the ‘verandah’ of the set. The ‘tree’ was carefully moved to centre stage right - and the theatre went dark.

And there everything remains, waiting patiently, until we get the “all clear” to open again …  in a future that is less fearful, less isolating and more hopeful.