A Feast of Dahl at Pymble 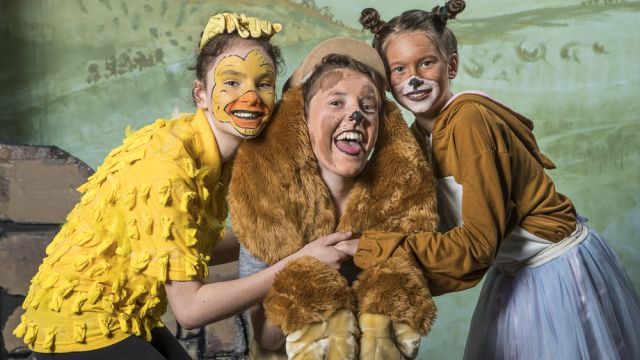 Who doesn’t love Roald Dahl’s subversive, funny stories?  Pymble Players director Patsy Templeton is convinced that children find it quite delicious to see adults behaving badly and getting their come-uppance.

“Dahl must have had a strong sense of justice,” says Patsy, “which you can see played out in his poems and stories. But the righters-of-wrongs are the children, not the grown-ups. And the kids love it!”

Pymble Players 2017 children’s production brings to the stage three writings from Roald Dahl. In The Magic Finger, young Lucy has an incredibly powerful finger, who finds a way to thwart the duck hunting Gregg family.   To the Gregg family, hunting is just plain fun but to Lucy who lives next door, it's just plain horrible. She tries to be polite, she tries to talk them out of it, but the Greggs only laugh at her. Then one day the Greggs go too far, and Lucy turns her Magic Finger on them. When she's very, very angry, her Magic Finger takes over. She really can’t control it, and now it's turned the Greggs into birds! Before they know it, the Greggs are living in a nest, and that's just the beginning of their problems.

On offer also is Dahl’s version of Goldilocks and The Three Bears as you have never seen it before when the Bears finally get some justice. And just for fun, some of the poems from The Dirty Beasts will be acted outside the theatre before the show starts.

Directed by Patsy Templeton, a long time actor and director with Pymble Players, this performance for children brings to a close Pymble Players’ 60th season. The 14 cast members include five families with seven young people.  These include the Trippis family, George, Tina and Mekaila, as a musician/actor, stage manager and actor respectively.  Mekaila, aged 16, plays Lucy with Ashley Rome-Hudson as William. Joshua, Ashley’s twin, plays a dog and a duck. Sasha Dance, 14, plays a duck channelling adolescence, while her mother Julia plays Mrs Gregg and Mother Bear. Other children are Patsy's great nieces Ella (7) and Vivi (5) Woodman who are alternating as Goldilocks and Rachel Jackson, aged 10, who plays Baby Bear –plus tutu!   The grownups, playing a variety of roles, are Jim Burns, Wendy McNeilly, Pat Plant, Angela Barolsky and Jan McLachlan .

Accompanied by live music, supplied by Murray Fane, Geoff Jones and George Trippis, what a lovely way to spend an hour with children or grand children enjoying these funny and clever stories being brought  to life.

Image: Sasha Dance, Joshua Rome-Hinson and Rachel Jackson all ready for the show!