The importance of Postponing Earnest 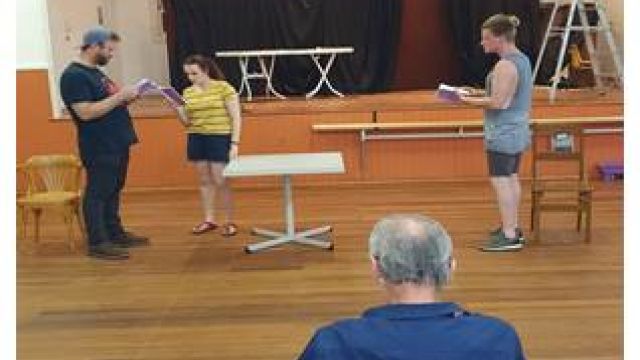 For St Luke’s Theatre Society, 2020 meant many changes.  Firstly, because of construction work on their home premises, they had to find alternate premises for the year.  They negotiated with the Anglican Christ Church at Yeronga.  The first play was set to be Oscar Wilde’s classic The importance of Being Earnest.  Well know Brisbane director Gary O’Neil was set to direct this play.  He assembled a very talented cast including Jason Nash and Stephen Quinn, popular Brisbane actors, as well as St Luke’s President Trevor Bond, playing dual roles of Lane and Chasuble.

Rehearsals began in the Christ Church hall, and at the same time, St Luke’s set construction crew began adjusting the smaller stage to suit our needs.  To extend the stage, a temporary extension was set to be put in place for the performances. St Luke’s Theatre Society also put air conditioning in the hall for the comfort of patrons on the predicted hot summer afternoon matinees. Our set designer, Una Hollingworth, constructed reversible sets for the smaller stage that could be quickly swung into place for the next scene. Storage space was also negotiated. Great period costumes were hired from Savoyards and gleaned from the costume department and from Villanova Players. So, all was moving along quite smoothly and then the Coronavirus hit.

Regrettably, it became clearer and clearer that the show was endangered. And then one cast member became exposed to the virus and that was that.  The Management Committee made the difficult decision to cancel the show. The cast met and it was decided to postpone the production until October, the next available time for all cast members. The play was such a popular one, that it was decided not to let the opportunity pass to present it.

A small comfort is that St. Luke’s is not alone in having to cancel shows and rehearsals. It’s an old but true adage, that we must all stand together on this issue and hope and pray that things will get better and we wish all other Australian theatre companies all the very best through this time of un-precedented times.