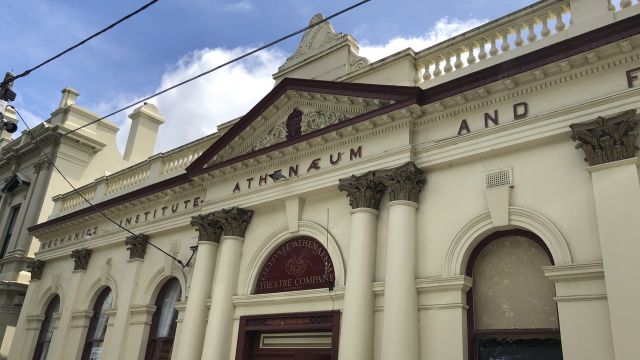 In Melbourne and Sydney, community theatres are custodians of historic venues which give audiences a unique experience. Our correspondents Simon Parris and Carol Wimmer describe what it’s like to attend a performance at the Lilydale Athenaeum and Genesian Theatres, respectively.

Not just a beautiful historic venue, the Athenaeum Theatre, Lilydale is surely one of the most generous and hospitable theatres in Australia.

Once a semi-rural town, Lilydale is now firmly attached to the suburban sprawl in Melbourne’s outer east. On this day, the township is buzzing with the annual Lilydale Show. Leaving the bustling crowds behind to step into the vestibule of the Athenaeum Theatre is to step back to a time of genteel serenity.

Furnished in burgundy brocade wallpaper and matching carpet, the room glows with antique lamps, a glass cabinet proudly displaying the trophies won by the company. A marble tablet memorialises the Mechanics Institute and free library that stood on this site from 1888.

Stepping through to the main foyer, there is a strong sense of history, with an abundance of posters of past productions alongside gleaming World War Honour Rolls.

Audience members are enjoying the free pre-show sherry, a cherished tradition, from half an hour before curtain at each performance and free programs handed out by volunteers.

The production on show today is the popular new Australian musical Ladies in Black. For a company that generally stages plays, the musical is good fit, with its tight ensemble cast and richly drawn characters. The musical’s setting in the late 1950s also brings a welcome sense of nostalgia for the company’s regular attendees. The season has sold around 2700 seats, proving popular with the company’s bank of 1300 subscribers. The director of Ladies in Black, Alan Burrows, also serves as Chairman of the Board of Lilydale Athenaeum Theatre Company. Over 40 years, Mr Burrows has directed 39 shows and choreographed ten. The foyer of the theatre is named after his father Harold, who directed 19 productions at the Athenaeum. Mr Burrows’ mother Doreen acted in several of them.

Following its initial life as a Mechanics Institute, the building became an RSL, the centenary of which was celebrated in January 2019. In line with this history, the building is open for a function every Anzac Day.

Coming to the attention of local television producers, the theatre was rented out to film an episode of the mystery series My Life is Murder, which stars Lucy Lawless. Local audience members joined television extras in the auditorium for the filming.

The building was converted to a theatre in 1976, and the Athenaeum Theatre Company is the sole occupant with a long-term lease. The company stages four productions each year, focusing on shows that will appeal to good directors and actors as well as to the audience.

Ladies in Black, a co-production with the Malvern Theatre Company, had a relatively generous budget, allowing for a full range of period costumes. Scenic design is expanded with projections, bringing the 1950s to vivid life.

The auditorium comfortably houses 200 patrons, with good sightlines. The dark burgundy decor continues through the auditorium, with a highlight being the white swirled pattern on the original pressed steel ceiling. Plays are performed acoustically, with a small number of plate and shotgun microphones used in musicals to give the vocals a boost. Cast members are accommodated in dressing rooms and green room below the stage. Sets and scenery are constructed in an adjacent workroom.

The theatre enjoys a good relationship with the nearby Melba Museum, and a room adjoining the main foyer contains the theatre’s own collection of Melba memorabilia, including photos and newspaper covers. Some of the items are reproductions created by Lilydale Historical Society volunteer Sandy Ross, who sadly passed away in 2019. More of the theatre’s own history is also on display in this room, including costumes and set boxes.

Pre-show sherries and programs are not the only bonus attractions of attending a show at the Athenaeum. At interval, the foyer fills with audience members enjoying the complimentary tea, coffee, soft drinks and biscuits. Further complimentary beverages and savoury nibbles are served after the performance, giving audience members the chance to meet and mingle with the cast.

Easily reached by train, Lilydale has an old-world charm, underpinned by the charming character of the Athenaeum Theatre. In the heart of Sydney, dwarfed by surrounding warehouses and skyscrapers, nestles a little sandstock building that has been part of the city’s history since 1868.

It began life as the Church of St John the Evangelist and for sixty-four years served as both a church and a poor school. In 1932 it became the Kursaal Theatre, home of the Sydney Repertory Company, then, from 1938 to 1954, it served the less fortunate as Sydney’s first Matthew Talbot Hostel.

For the past sixty-five years it has been the home of the Genesian Theatre Company, one of Sydney’s most highly respected community theatres. Named after Saint Genesius, the patron saint of actors, the company, formed in 1944, has nurtured its historic home, preserving its distinctive façade and the original wooden fence that still protects it from passers-by.

Walk with me along Kent Street from Darling Harbour to the classic yellow neon sign that has been beckoning theatre goers for years. Look up to the widows above the door, where the Greek theatre masks are depicted in painted glass. Come with me through the narrow double wooden doors into the tiny foyer where members of the company do their ‘front-of-house turns’ at the box office or usher us into their little theatre that proudly still whispers of its historic past.

See how the transept has become a raised stage. Behind its velvet curtains, look up to the original ornate stained glass windows that grace the high back wall. Damaged in 1968, these windows were lovingly rebuilt into metal-hinged frames. Light boxes behind them ingeniously imitate the light that would have shone through them before higher buildings blocked out the sun.

On either side of the theatre, notice the painted lead light windows that commemorate the company’s very first production, The Comedian, performed in 1945, and, appropriately, Murder in the Cathedral, their first play at this, The Genesian Theatre, in 1954.

From the stage, a slight rake houses the main body of the theatre with seating for 87 patrons. Behind it, also rebuilt in 1986, is the control box, the technical hub of every production. Turn and look above the control box to the quaint “Dress Circle” and climb the metre-wide staircase built by the members to replace the ladder that once led to the original choir gallery.  Here 38 patrons look down on the stage – and I’m assured by archivist/historian/set builder/photographer Grant Fraser that “seats 8 and 9 in the front of the circle are the best seats in the house”. Genesians like Grant are justly proud of their theatre and its history. For many it has been a family affair. Harold Fraser, Grant’s father, was a foundation member. Grant’s brothers, sister and his son have all performed on the Genesian stage – along with more than 11, 700 actors and creatives. Some, like veteran actor and director John Bell, playwright Peter Kenna, broadcaster James Dibble and movie director Baz Luhrmann moved on relatively quickly to greater things. Others, like Bryan Brown, Peter Carroll, Sarah Chadwick, Colleen Clifford and Kevin Jackson performed in many productions before their talent took them to the wider theatre world.

The company has mounted 441productions in 75 years. Many of these premiered on the Genesian stage. Many introduced new Australian playwrights. Some of their Shakespearean productions moved on from Kent Street to other, bigger stages. Today the company mounts six plays a year, no mean feat for a group of devoted ‘volunteers’ who rehearse and build in other spaces, then ‘bump in’ to the theatre, transporting the set and reconstructing it ready for final rehearsals.

The 2020 season, however, was set to be be the theatre's last. Like so many of Sydney’s old and cherished buildings, this special little theatre is soon to be subsumed into a major redevelopment.

For over a hundred and fifty years its stained-glass windows have kept watch over a diverse variety of Sydney-siders – church congregations, schoolchildren, homeless men, nearly twelve thousand theatre practitioners and over fifty thousand theatre patrons. Its sandstock walls have seen a city change and grow. The little wooden front fence has protected it from horse-drawn carriages, cars and skateboards. Perhaps the ghosts of church wardens, teachers, directors and players past – and Saint Genesian himself – will breathe a little history and classic culture into the new walls that rise around them.