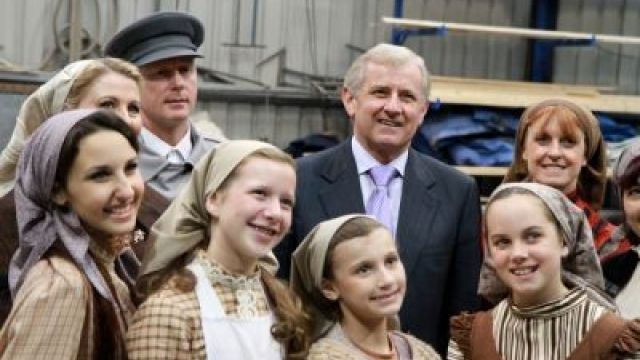 Melbourne’s CLOC Musical Theatre recently ended a spectacularly successful season of the music theatre classic Fiddler on the Roof, which broke attendance records for the company. The CLOC production placed a strong emphasis on authenticity, from the intricate sets (complete with Russian and Hebrew writing and Jewish paraphernalia), layered costumes, period props and even extending to ensuring all Jewish customs and minutiae were correctly portrayed onstage.

In the lead up to the show, CLOC received a visit on May 5thby Simon Crean, Federal Member for Hotham and Federal Minister for the Arts.  Mr Crean visited CLOCworks, the site in Heatherton where CLOC constructs their sets and sews their costumes.  Given that this site sits within Mr Crean’s electorate, and given his position as not only Minister for the Arts, but a lover of both opera and musical theatre, it was a natural fit for him to agree to come and see first hand what heights non-professional theatre can reach.

Mr Crean spent over an hour at CLOCworks, firstly looking over the busy Costume Resource Centre (CRC), inspecting CLOC’s store of over 10,000 costumes and accessories, and chatting to some of the wonderful volunteers who faithfully come each Saturday to spend their day sewing, chatting, eating and laughing amongst like-minded friends.  He then moved next door to ‘The Shed’ – the set building hub of the company.  Here he inspected the very impressive fully constructed set, chatted with costumed cast members, and met with CLOC committee representatives and several of theFiddler production team, including Chris White, the co-director and set designer for the show, and Grant Alley, long-term CLOC President.

Mr Crean was a warm, gracious and personable guest, who took time to chat to each and every one of the many CLOC volunteers and performers who were there to greet him. He was very impressed with CLOC’s facilities and skills, and with their level of expertise and commitment to providing high quality entertainment at affordable prices, as well as invaluable training for many aspiring theatre performers and technicians.

Since Mr Crean’s visit, Fiddler on the Roof has come and gone, and CLOC is now about to begin rehearsals for their next production, Lord Andrew Lloyd Webber’s Aspects of Love, for a season running from September 23rd– October 8th.   For all details, go to www.cloc.org.au.