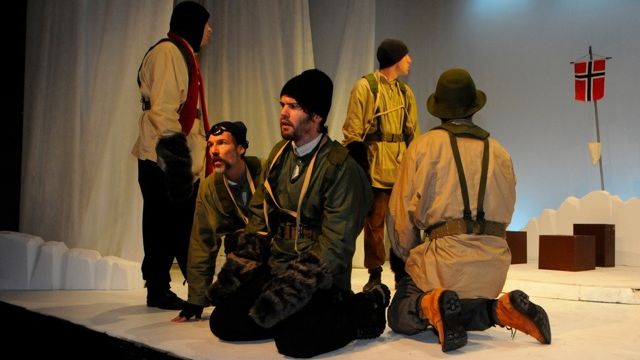 On 17 January 1912 Captain Robert Scott and his team arrived at the South Pole. Sydney's Genesian Theatre will celebrate the occasion by present Ted Tally's Terra Nova, a play about Scott's ill-fated mission, based on the letters that Scott and his wife wrote, but never saw.

Captain Scott's epic, and ultimately fatal, final adventure is the true stuff of legend. Following his own brand of muscular Christianity, Scott led his men towards what he believed to be his pre-ordained destiny - pre-eminence at the South Pole. Ted Tally's insightful play examines whether one of recent history's most epic failures was a result of bad luck, bad planning or, as some historians believe, the final act in Scott's doomed existence.

In the centenary of their death, the play looks at the character of the men who lived and died in the Antarctic wastes and shows the human face of a fateful journey.

To mark the actiual centenary of the achievement, on Tuesday 17 January 2012 the Genesian Theatre will be presenting a gala performance of Terra Nova, all tickets $40 including complimentary drinks, supper, and a guest speaker.