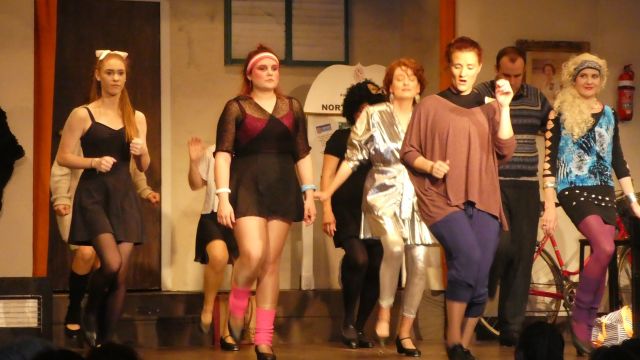 Natalie Pedler describes the excruciating challenge of re-learning to tap dance, memorizing lots of lines and squeezing into a leotard on the wrong side of 50.

I may be a middle-aged mother of two, working in a largely sedentary occupation, but in my head I’m Hollywood’s Anne Miller - long legged, wasp-waisted and full of energy as I tap myself though life with lightning speed and precision. So when a friend told me about a play she was directing that involved tap dancing, I nonchalantly replied, “sounds interesting” while my inner Anne mentally did a high five and told my feet to prepare for action.

I confess I’ve tapped before. I took classes as a child so I knew tapping to be a joy. Of course time marches on and the only way to know if you still “have it” is to strap on the taps and give it a go.

Stepping Out is a terrific play. Written by British playwright Richard Harris, it’s set in a dingy church hall in Northern London where a disparate group of individuals gather each week to master the art of tap dancing. With little confidence, little cohesion and very little talent between them, their hapless teacher, Mavis, faces a challenge preparing her motley crew for a charity performance.

As the play unfolds the audience learns a lot about each character and the characters learn a lot about themselves.

With a distant tap history in my favour, I also drew upon a very distant amateur acting past as I prepared for my first audition in over twenty years! 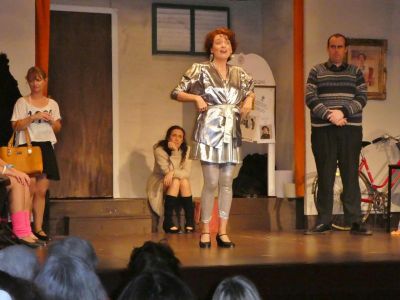 It’s odd the way life imitates art. Stepping Out takes place in a church hall.  Brisbane’s St Luke’s Theatre Society is based entirely in a church hall! The characters in Stepping Out come from all walks of life. Our cast included a drama student, a trainee teacher, an accountant, a public servant, a primary teacher, two retail workers and a career counsellor. The characters in Stepping Out are largely novice tappers; absolute parallel there too, with almost every cast member new to tap dancing.

So with a distant history in both tapping and acting I suddenly found myself needing to master both anew.

Memorizing all those lines was excruciating. This middle-aged brain ain’t what it used to be.

The tapping, however, was my biggest challenge. The steps were relatively easy to master. It was the sequences that befuddled me. No matter how many times my legs went through the motions I found the music started and my mind drew a complete blank (I bet that never happened to Anne Miller!).

I was not alone. Two cast members very nearly downed tools and walked off the job, so sure were they that they’d never manage to tap dance convincingly.  We often reassured each other that our characters were learners, not professional tappers; some degree of clumsiness and dodgy coordination was surely only going to make our portrayals more authentic.

Lines and tapping aside, costuming posed quite a dilemma for me. My character, Vera, was meant to be a classy woman in her late thirties. From a distance, in a good light, I can probably pass for 39, but only in well fitted, flattering clothes - not in a leotard! 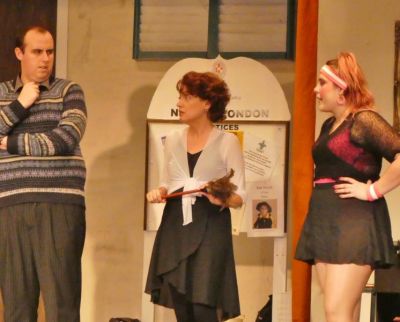 How was I going to appear, on stage, in a leotard and not look like a complete idiot? Moreover, the script also called for my character to appear in a silver cat-suit.

I firmly rejected that cat-suit idea from the outset and, thankfully, our Director agreed.  To my everlasting relief, we managed to concoct a vulgar silver costume that audiences seemed to find amusing without the revealing properties of a cat-suit.

There was still the challenge of the leotard. The sight of my fifty-two-year-old self in a full length mirror clad in just a small amount of lycra was frankly dispiriting. In the end I decided that Vera would be the kind of woman who would wear a soft chiffon dance skirt over her leotard. A skirt hides a multitude of sins.

And so Opening Night came. Vera donned her leotard and skirt and I channelled Anne Miller. We all tapped our way through the play to rapturous applause and nobody seemed to mind that we fell short of the high dancing standard Broadway has set.

Far from minding, the audiences seemed to warm to our efforts.  They chuckled when we dropped our canes and hats; they chortled as we collided with each other and they cheered their appreciation as we unleashed our glittering “finale” number upon them, dazzling them with a bit of polish and some clever choreography that actually made us look half decent - proving the play’s point that with support, some self-belief and a little application you can find your feet.

Originally published in the July / August 2017 edition of Stage Whispers.