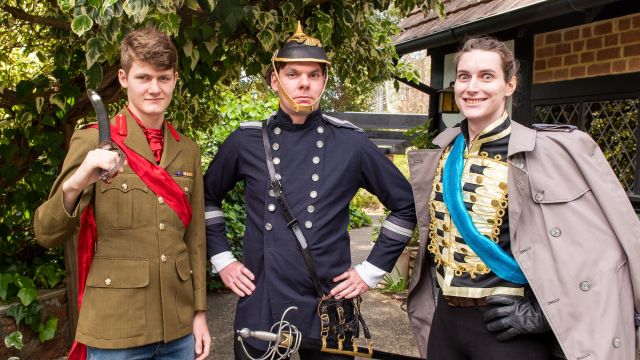 THINGS aren’t always quite what they appear to be in Roleystone Theatre’s December 2020 production of Terry Pratchett’s Monstrous Regiment.

Adapted for the stage by Stephen Briggs and directed by Bradley Towton at Roleystone Hall, the comedy follows Polly Perks who enlists in the Borogravian Army to search for her lost brother.

She soon finds she’s not alone in protecting a similar secret and is joined in battle by the most artful sergeant in the army, a vampire, a troll and Igor – and none of them have any training.

Dying of Alzheimer’s in early 2015, Pratchett was the UK’s best-selling author of the 1990s, selling more than 85 million books worldwide in 37 languages.

“Monstrous Regiments is a satirical comedy that’s sometimes tongue-in-cheek and other times it’s almost in someone else’s cheek,” Towton said. “The show has subtle messages about war, truth, propaganda and the role of women in a society dominated by men.

“For those familiar with Pratchett shows, they can expect quick puns, lowbrow humour and hidden highbrow gems.

“We also have a strong vocal cast, so there should be no problems with hearing all the jokes and heartfelt moments.”

The main challenge, according to Towton, is showcasing the “monstrous” side of the regiment.

“Actor Zac Skelton has had to learn to puppeteer to operate the full troll outfit,” he said.

“Our coffee-addicted vampire has to move in the jitteriest way possible while trying to be suave and Igor needs to show off a hunch and talk with a serious lisp.” Involved in theatre for the past 10 years, Towton studied performing arts at Curtin University and appeared in several Stage Door School shows before joining Roleystone Theatre to perform in Much Ado About Nothing, Avenue Q, Peter Pan and Charlie and the Chocolate Factory.

He has also appeared in Garrick Theatre productions of A Lady Mislaid, Project Macbeth and Love is a Noun and scored acting awards for his roles in She Was Only a Miller’s Daughter and Footrot Flats at Roleystone Theatre.

“Monstrous Regiment is the third Terry Pratchett show I have directed and each one has been a delight,” Towton said.

“They are inspirational, funny and often have a very strong message behind them.

“Monstrous Regiment is no different and gives a strong voice to a women-led cast, while also exploring what life can be like in a war zone with all information strictly quarantined behind propaganda.

“Most importantly, this is the first show from Roleystone Theatre since the COVID-19 shutdown, so I wanted to put on a show that would make people laugh and remember the good things about our lives.”