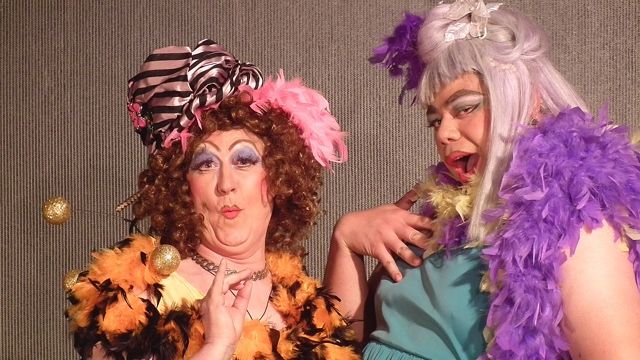 The great traditional British Pantomime is coming to Masterton, New Zealand and the Masterton Amateur Theatrical Society (MATS) has chosen Cinderella by UK writer Ben Crocker, for this year’s traditional end of year show for its upbeat and funny script.

Cinderella is the rag to riches story of downtrodden Cinderella and her horrible step sisters. It is described as an hilarious romp through the fairy tale with whacky characters and upbeat music and songs.

There’s the traditional gender reversals of roles in British Pantomime, as cross dressing male and female roles see the men dress up as the dames and the beautiful woman dress up as a handsome male.

There’s even the front and back ends of a traditional panto horse!

Traditional pantomime has more audience participation than most shows, with the audience boo-ing the villain and shouting out, “He’s behind you” and “Oh No He’s Not, Oh Yes He Is” etc.

Two of the main characters (pictured) the Ugly Sisters (identical twins!) are played by Andrew Charnock (Beryl) and Jonnie Samio (Cheryl), and we’re promised they have a number of hilarious scenes and interaction with the audience.

Craig Thomson, Musical Director, says, “We have some fantastic up beat numbers for the lead roles and also the chorus, including Queen’s “Somebody to Love” and Smashmouth’s “I’m a Believer” with a full gospel chorus. It will be great”!

Rehearsals have started for the show, which opens on Friday 25 November through to Saturday 3 December with show only tickets available for $25. There is a dinner and show option for $49.