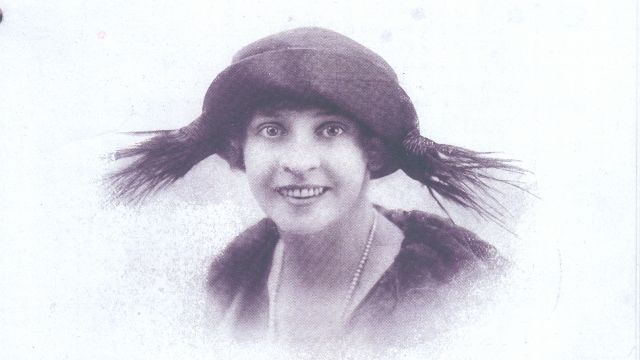 No Gilbert and Sullivan joke, this. A court case over a breach of promise of marriage once tainted a sweetheart of the Australian stage.
Leann Richards reports on the life of Maggie Dickinson … a dancer who brightened Australia’s theatres during some of the country’s darkest days.

Born in Flemington Victoria in 1894, Margaret Esme Dickinson began dance training at an early age. At 16 she made her debut at the Theatre Royal in Melbourne in The Arcadians, credited as ‘Aleto,’ an Arcadian, and billed just above Dreamland, a real racehorse.
Although Maggie had made a brief appearance in the 1912 J C Williamson pantomime, Puss in Boots, it was not until the next year that she became a featured dancer in the annual production. Her dances soon became an expected part of the yearly extravaganza.
Pantomime was one of the most popular forms of entertainment in early 20th Century Australia. The Williamson show was a panoply of elaborate sets and costumes which starred the most famous performers of the day. Attending the Christmas pantomime was a tradition for Australian families and they expected the best in scenery, costume, topical jokes, music and dance.
The 1913 production was The Forty Thieves and Maggie was featured in the show. She played the ‘spirit of mischief’ and also appeared in the black and white ballet. One night, her dancing partner was unexpectedly injured and could not perform. Maggie was on stage alone and looked to the side of the stage expecting his entrance. When he did not appear, she improvised a series of pirouettes until a replacement was found. An oblivious audience applauded wildly. Maggie, who had lived all her life in the theatre, was a strong believer in the adage ‘the show must go on’.
During World War One, pantomime played an important role in maintaining morale in Australian society. Traditional pantomimes were altered to include local references and patriotic scenes. Maggie became an integral part of the annual pantomime tradition and played a major role in promoting support for the War.
The Christmas 1914 pantomime Cinderella mixed war themes such as ‘The March of the Allies’ with topical songs like ‘As we stroll down Swanston Street.’ Maggie was the principal dancer in several ballets such as the Wildflower Ballet, in which she played the red poppy.
Throughout the war years she continued to appear in Williamson shows, but it was her pantomime appearances which made her popular. In 1915 she was the principal dancer in Mother Goose and in 1916 she followed this with a striking appearance in The House that Jack Built. A New Zealand admirer said of her dancing in the latter show:
‘Maggie Dickinson is the easily the star attraction in the pantomime which has just left us and her wonderful grace and charming vivacity were a revelation. She brought light and gladness into many hearts sad and war worn in these dreary days.’
Maggie had become a symbol of hope and joy for many and at 23 was expressing her individuality in a touching and exquisite manner.
The last pantomime of the war years was Dick Whittington. For this production Maggie was partnered with Sydney Yates in one of the most incredible ballets of the era, The War Ballet. In it Maggie played Peace, Sydney played Civilisation and Ruby Grainger played War. All the nations involved in the war were represented and War, ‘a grim swift and black garbed figure’ swayed the countries, pushing peace and civilisation aside. This set all the nations against each other ‘in the terrible clash and slaughter of battle.’ It was a dramatic ballet which vividly illustrated the horror of war.
This was the first time Maggie was partnered with 26-year-old Londoner Yates. Sydney had previously danced in Europe with his lover, Daisy. However, he had been asked to accompany Maggie in the pantomime and had broken the partnership with Daisy. Maggie and Sydney danced together regularly and inevitably they fell in love.
In 1919 they appeared in the pantomime Goody Two Shoes and during the run they announced their engagement.
Daisy Yates, Sydney’s former partner was not impressed. Her career had been in decline since Sydney had left and now her hopes of marrying him were dashed. In 1920, as Maggie and Sydney danced on stage, Daisy sued Sid for breach of promise.
All the sordid details of Sydney and Daisy’s relationship were detailed in the press. They had worked together for many years and had a successful romantic and dancing partnership, until Sydney had met Maggie. Daisy described Sid’s love letters to her and his declaration of undying love for both women. In the letters he stated that he was ‘bound tightly by a cord of honour to two women.’ However, eventually Sid had chosen the woman who would advance his career, Maggie.
So scandalous was the situation that Jack Cannot, a popular comedian, parodied Sid every night on the Tivoli stage. The case was finally settled in Daisy’s favour and she was awarded damages of £500. Sid had declared that he was financially embarrassed so Maggie probably footed the bill.
In 1921 Maggie and Sydney married in Melbourne and then travelled to London to continue their careers away from the taint of scandal.
They had a great deal of success in Europe and in 1924 they headlined the London Coliseum as the immensely popular Whirl of Girls. One day Maggie broke her ankle, but again proved her devotion to her craft, by performing on stage that night without showing any pain. Her ‘dying swan’ routine was a feature of the Whirl of Girls act in London.
The group’s popularity extended to Germany and they performed at the Hansa Theatre in Hambourg and the Wintergarten in Berlin. They followed this with a tour of England and Scotland in a musical called Mercenary Mary.
Eventually Maggie returned to Australia and worked as a choreographer for the Williamson Company. Her career as a dancer was over, but she remained involved in theatrical activities for the rest of her life.
Maggie Dickinson died in 1949 in Victoria aged 54, having delighted thousands of people during a dark stage of human history. Her large eyes and cheeky grin, preserved in pictures, give some insight into how this beautiful Australian dancer mesmerised a generation.