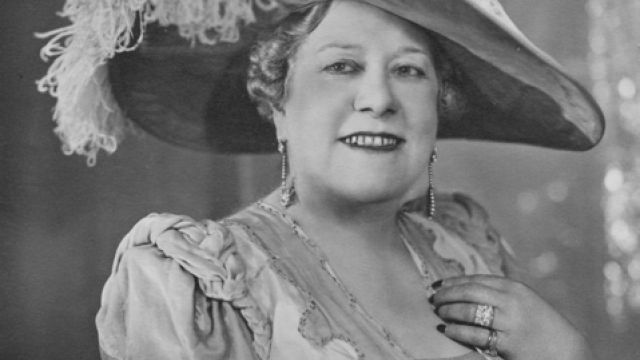 Who now remembers Florrie Forde? It’s nearly seventy years since she died and her art is all but forgotten, but many of the songs she introduced and popularised are still sung with nostalgic gusto.
For four decades this jolly, buxom songstress sauntered across the music hall stages of Britain. She was billed, accurately, as ‘the world’s greatest chorus singer’ – and she came from Australia.
Flora Flanagan was born to Irish-Australian parents in the Melbourne suburb of Fitzroy on 16 August 1876. Her father was a monumental mason. After he died, Florrie took the name of her stepfather, a Mr. Forde, a supplier of theatrical costumes. She was sixteen and stagestruck when she ran away to Sydney with her sister Nan.
On February 1, 1892 Florrie made her professional debut singing ‘See Me Dance the Polka’ at the claustrophobic Polytechnic Hall in the Imperial Arcade. In spite of her total lack of tuition her success was immediate.
Florrie sang in the chorus at Her Majesty’s and played a couple of small dramatic roles (she was a ‘larrikiness’ The Work Girl). Back in Melbourne she sang ‘After the Ball’ for sixteen consecutive weeks at the little Alhambra music hall in Bourke Street. There she had the honour of riding Tarcoola, winner of the 1893 Melbourne Cup, onto the stage.
Florrie made her Tivoli Circuit debut in January 1894. Her big break came in December that year when she was cast as Principal Boy in George Rignold’s pantomime The House that Jack Built. In 1896, back at the Tivoli, she was ‘spotted’ by star English comedian G.H. Chirgwin. He offered her £25 a week for three years if she would tour England under his management. Florrie figured that if she was worth that much to Chirgwin, she should take the risk and go it alone. A Benefit performance raised £260 – and off she went.
Florrie Forde made her London debut on August Bank Holiday 1897, appearing at three different music halls on the one night. Though she was billed as ‘the Australian Marie Lloyd’ there was no need for the comparison – she was nobody’s imitator. Within weeks she had engagements extending over three years.
Florrie cut her first recordings in 1903. Her strong, clear voice transcended the primitive equipment, and she swiftly became a top seller. Over the next three decades she made around 700 records. It is a tribute to her that, though the discs and cylinders turn up fairly frequently, they are almost always very worn: a sure sign of popularity!
Though Florrie did not write her own material she had an uncanny knack of picking a good song. If a new number failed to have the audience joining in the chorus by the second or third night, she’d discard it. Her first really big hit was ‘Down at the Old Bull and Bush’ in 1904. It was encored 33 times when she introduced it and it put Hampstead Heath and its picturesque pub firmly on the map; today the public bar is fondly dedicated to Florrie’s memory.
Soon she had a swag-full of immensely popular chorus numbers. Even today, these have the power to evoke nostalgia for a simpler, carefree, bygone age: ‘Oh! Oh! Antonio,’ ‘Hold Your Hand Out, Naughty Boy,’ ‘Flanagan,’ ‘Has Anybody Here Seen Kelly?’ One of Florrie’s greatest successes was ‘It’s a Long Way to Tipperary.’ Though written in 1912 it came into its own as a World War One flag-waver. Florrie had another big wartime hit, the evergreen ‘Pack Up Your Troubles’.
Most of Florrie’s year was spent appearing in and around London. The few remaining months were shared between provincial tours and her annual summer seasons at Douglas on the Isle of Man. Every Christmas she’d produce a lavish pantomime with herself as the dashing, leggy Principal Boy. An early Dame in her company was a young comedian called Robert Winthrop. Florrie encouraged him and even ‘lent’ him her own name – he became famous as Bud Flanagan of the legendary Flanagan and Allen duo.
In 1905 Florrie married Laurence Barnett, an English antique dealer – ‘but that’s not the reason he chose me!’ she would laugh. Though news of her was frequently reported in the Australian press, she never found time to return home. Nevertheless, through her long career, she always proudly identified herself as Australian.
In 1912 she was in a select group of music hall favourites chosen to appear before King George V in the first Royal Command Variety Performance. Twenty-three years later she was one of the ‘Veterans of Variety’ in the Command Performance celebrating the King’s silver anniversary.
Florrie never retired. In World War II she devoted herself to troop entertainment, just as she’d done a quarter of a century before during World War I. On April 18, 1940 she sang for patients in an Aberdeen naval hospital and died suddenly a few hours later. She was 65. Theatre historian W. MacQueen Pope saluted her as ‘the epitome of music hall gusto.’ Even the illustrious Melba was a fan. ‘Florrie’s is a voice of true Australian quality,’ said Dame Nellie. ‘She might have been trained for opera but, instead, gives pleasure to a far wider audience.’
Frank Van Straten.