Lonely Death for Queen of the Stage. 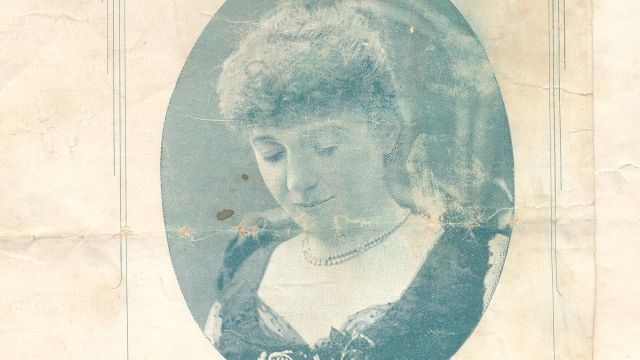 In 1873, outside the Melbourne Theatre Royal, a fair young girl, with a face surrounded by reddish gold hair, approached manager Mr Harwood.  In a sweet voice, tinged with a slight Irish brogue she asked, ‘Please sir, can I be an actress?’

The young girl was Myra Kemble. In three decades she reached the heights of colonial fame and the lows of a lonely death.

Myra was born Maria Teresa Gill in Sligo Ireland around 1857. Her parents brought her to Australia when she was seven years old and she was immediately enrolled in a Geelong convent. She was scheduled for a music lesson when she approached Mr Harwood on that fateful day in 1873.

He gave her a part, a small part in a pantomime, and she made a very attractive Venus. She continued in small roles but her youth led to many mistakes, which included nervously lapsing into an Irish brogue at inappropriate moments. The habit amused many audiences, but did not impress managers.

Myra persisted and she eventually arrived in Sydney. At Christmas 1875 she appeared in a pantomime at the Theatre Royal.  She was part of that theatre’s company for almost a year and mostly played decorative roles.

In 1876 she moved to the rival Victoria Theatre and was part of the Centennial Burlesque Company with a young Bland Holt and his future wife, Leni Edwin. Australian actors of this era were extremely versatile and Myra was no exception. During her stint with the Victoria, she performed in burlesque, pantomime, comedy, drama and Shakespeare.

By March 1878 Myra’s slight figure was a fixture of the Sydney theatrical scene. When she returned to the Theatre Royal that year the audience greeted her with long and loud applause. It was at the Royal that she began to take leading roles, such as Lady Teazle with Wybert Reeve in A School for Scandal.

These were great years for Myra professionally and personally. In December 1878 she married James Whitehead, also known as James White. James was known as ‘diamond Jim’ the straightest bookmaker in Sydney.  She had her first benefit performance in 1879 and was proclaimed an ‘actress of the first rank.’

In Melbourne she starred in New Babylon and toured South Australia, Tasmania and Victoria. In October 1882 Myra gave birth to a baby girl. She was well loved by the public, her family was growing and she was successful in love and life. However things changed very rapidly.

In March 1883, Myra committed herself to the Northcote asylum for inebriates. The home was a private sanatorium for alcohol dependency and Myra had signed for six months. It was run by a doctor who was one of the first people to treat alcohol dependency as a medical rather than as a moral issue. In June 1883 her husband applied to a court to have his wife removed from the home. He was unsuccessful because the doctor refused consent.

Myra was eventually released but announced she had retired from acting. She and James travelled to New Zealand and she volunteered, through the newspapers, to act for local amateur theatres. Nobody accepted this offer, but the reporter commented favourably on her ‘prepossessing physique and ladylike demeanour’. Soon it was reported that she had ‘relapsed’.

It was not until late 1884 that she returned to the boards, and her talent and name ensured continuing fame. She was a fixture of the Sydney social scene, and in 1887 one newspaper commented favourably upon her ‘perfect fitting and beautifully draped dress of plain green cloth without a particle of trimming.’

In 1888 her portrait was hung at a prominent art gallery. The same year a short and complimentary biography appeared in the Illustrated Sydney News which described her as a ‘lovable, warm hearted woman’.

In 1889, having conquered Sydney, Myra travelled to England to try her luck. 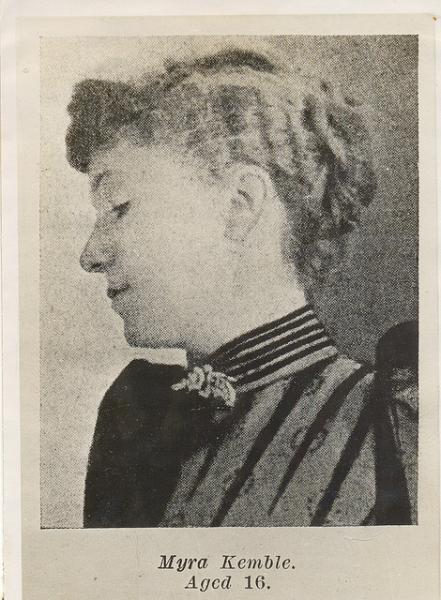 A large benefit performance was held to farewell her. A distinguished list of Sydney’s leading players  performed. They gave her a gold bracelet as a memento of the occasion.

In London, the Queen of the Australian Stage was greeted warmly and feted heartily by expat Australians, but the English critics were lukewarm. They were too sophisticated for a colonial Irish actress and, disheartened and dispirited, Myra returned to Sydney.

Before leaving London, Myra proved herself an astute businesswoman. She purchased the Australasian rights to a farcical comedy called Dr Bill. When she returned to Australia she joined with the Brough and Boucicault Company and toured the play around the country. It was a phenomenal success.

In 1890, Myra was one of the first people in Australia to have their voice recorded on a phonograph and the recording was played to an appreciative audience at the School of Arts. In 1893 she was voted the most popular actress on the Australian stage in a newspaper poll.

The depression of the 1890s hit the White family hard and in 1894, despite a popular tour of New Zealand, Myra was in some financial distress. She again decided to perform in England. The trip was a disaster. Myra was ill and hospitalised at Guys in London for 17 weeks. According to New Zealand papers, she had ‘internal cancer’. She returned to Australia as an invalid.

However, she still gave interviews. She was happy to trade gossip with one Sydney journalist, who described her as being cheery, despite being unable to stand and in constant pain.

The theatrical community rallied to her side and organised a major benefit concert. On May 7, 1896, at the Lyceum Theatre, all the major theatre managers and owners joined to raise money for the star. The show included JC Williamson’s company and the Tivoli Orchestra. Every famous name in Sydney attended and the performance was immensely popular.

The programme stated that Myra was ‘debarred from ever again appearing on the stage.’ But Myra did not agree with this assessment. She made a miraculous recovery and toured Australia with her own company in 1897 and 1898. However in 1900 she disappeared from the stage and by 1902 she was living in a private hospital in Melbourne.

Myra died in 1906 at Melbourne Hospital. Her death certificate recorded no next of kin. A New Zealand theatrical critic noted that her death had been caused by alcohol dependency, a vice that had ruined her health and her career.

Myra was one of Australia’s earliest and most popular actresses. She was an entrepreneur, a star and a warm hearted Irish woman; once the toast of Sydney, her lonely death proved the inconstancy of fame.