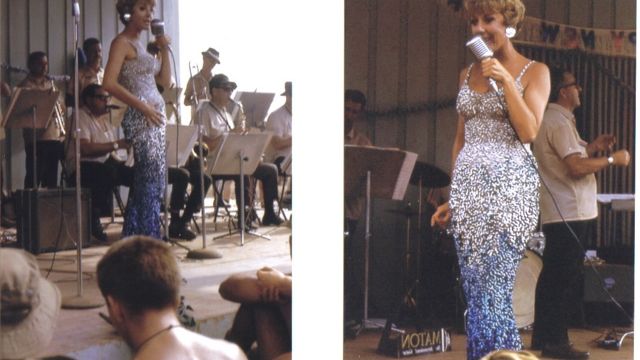 Lorrae Desmond’s passion for the “forgotten diggers” of the Vietnam War has never ceased stirring her heartstrings since her five tours of the war zones between 1967 and 1971.
To the Aussie troops, Lorrae became known as the “blonde goddess in the golden dress.” Her most treasured possession is a plaque with the inscription: Mother of All Vietnam Veterans. “Her boys” left their stamp of humour, courage and self-sacrifice forever on her mind.
In 2001 Lorrae read Bryce Courtney’s new book, Smoky Joe’s Café, and immediately realised its connection to the many things she saw and heard. It inspired Lorrae to obtain the author’s permission for her to write lyrics and some of the music for her musical play, Honey, which finally premiered at Parramatta Riverside Theatres in 2007. The composers were Charlie Hull, Martine DeCock, Scott Ogier and Doug Parkinson.
The storyline is fictitious, but its background is based on 1970’s political unrest that confronted the war veterans when they returned to Australia.
Lorrae thinks it is the rural pioneer stock she inherited that gave her the adventurous spirit to tour war-torn Vietnam with the Australian Entertainment Unit.
In her teens she set out on her own for London, determined to embark on a singing and stage career. Her meagre luggage included two “glam dresses” and a list of her goals. Seven years later the result was Meet Lorrae Desmond on BBC TV, Swing Along With Lorrae, guest appearances, pantomimes and variety roles.
Lorrae later commuted between London and Australia, winning a Gold Logie for her show on Australian TV.
Then came her role as Shirley Gilroy on TV series A Country Practice for which Lorrae won a Best Supporting Actress and a Penguin Award. She toured in High Society, featured in Legends In Cabaret and in her one-woman show, and promoted the Sydney Paralympics.
Now Lorrae hopes the great passion of a lifetime, recognition for the Vietnam War Veterans can be achieved by more productions of Honey - professional and amateur around Australia.
Francis Shoolman

Originally published in the July / August 2008 edition of Stage Whispers