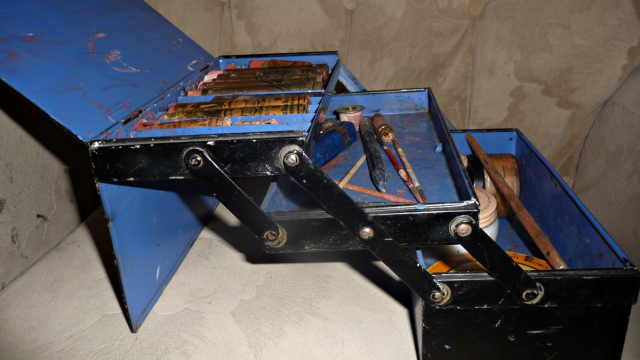 Coral Drouyn remembers an icon of show business, and a part of her own family’s history.

It was fifty years old when we first crossed paths – and that was more than seventy years ago. Once it had worn a coat of brilliant red, but that was back in its glory days. On the night we met, it was barely more than a tin box, rusting at the corners and worn, with a latch that didn’t close properly, but it was a part of history and I believed it was magic. When you opened the lid, various trays were raised up as if by a witch’s spell, revealing sticks that looked like plasticine … or maybe wax crayons. The insides of those trays were a mish-mash of greasy colours, and there was a faded note stuck on the bottom of the tin. If I had been old enough to read, I would have known that it said, “To Bertha, on her first performance. Remember to smile. 1898.” It was my grandmother’s makeup box. 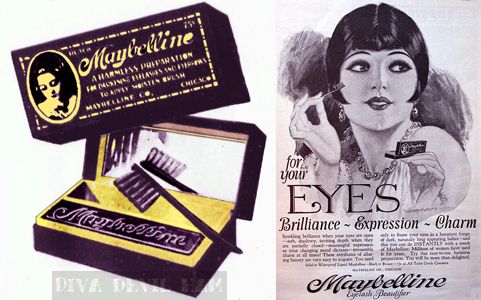 I never really knew my grandmother’s real name, and that wasn’t so unusual in the last century. Show people often had a real name; a stage name for theatre; perhaps one for film. Quite often if you were “on the halls” you changed your name when you changed your act. Thus she was Bertha Baker (in films), Ella Haig, Ella Coppin and (presumably) Mrs Denman, since my grandfather’s name was Charlie Denman, though his stage name was Charles Coppin, and the two of them, as a sophisticated double act, were billed at the London Palladium as “Haig and Esco – Britain’s Burns and Alan.”

Life is very different when you are raised in theatres. I saw shows from the wings, hidden behind the front tabs and the first set of “legs” in the Stage Manager’s corner. Sometimes I just stayed in the dressing room, tired of the back of their heads and the blinding footlights. I have no idea why I was in my grandparents’ dressing room. It was 1948 and perhaps my own parents were on tour. It’s all tiny mosaic pieces of blurred memory, and yet I remember the make-up box as if it was yesterday. 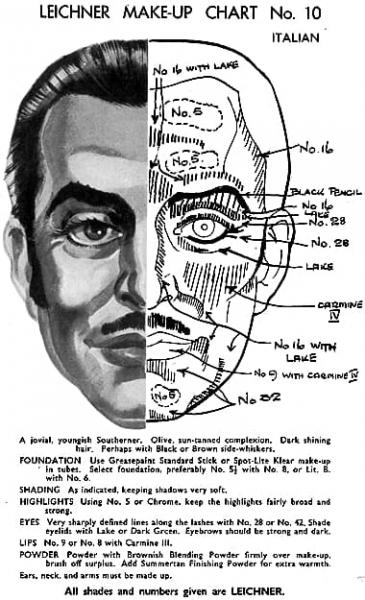 There was something evocative about the smell of stage make-up back then, and there was an old saying about the allure of theatre – “The smell of the greasepaint, the roar of the crowd”. If you weren’t addicted to applause, then you were hooked on the smell. It was called greasepaint because that’s exactly what it was, and you painted your face with it. Leichner was not the only brand available in the 20th century, but it was the best, and the most expensive. At the very least you needed a stick of No.5, one of No 9, a stick of Carmine, one of blue or green and smaller sticks of black and white. Then there was blending powder and a wonderful gooey make-up remover that looked for all the world like lard or goose fat and just dissolved on your skin, making the 5 and 9 run down your face and your eyes smudge so that you looked like a surprised Panda. Stage lights, both foots and follow spots (which were primed with lime - hence the term limelight) were unforgiving, and without makeup, your face looked like a squashed pancake.

There was no such thing as mascara in my grandmother’s time, so she used to bead her eyelashes. That’s where the stick of black came in. She would line her eyes with it and then squash the end into a teaspoon or tin lid, then heat it with a match or cigarette light. When it had melted, she would use the end of the matchstick to coat her eyelashes with the thick liquid, ending with a little drop – or bead - on the tip. If she wanted the lashes longer, she would simply add more beads. Years later Max Factor brought in block mascara, which came with a little brush. She would spit on the block to wet it, then gather the mascara on the little brush and coat her lashes, which were already long and black. 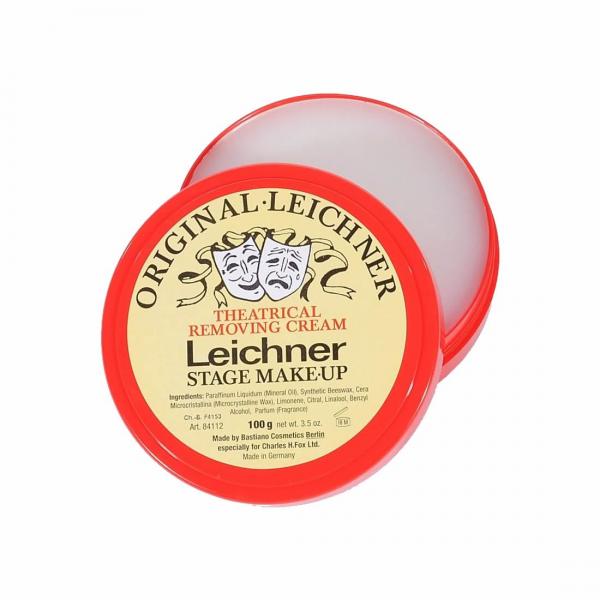 False eyelashes were far too expensive for all but “Star” celebrities. My mother used to make her own with a piece of black thread, with the hairs from her own head loop knotted over it. She’d then trim them to shape and use white latex glue (which went clear when dry) to apply them. They looked great, but she could never persuade my Nana to stop beading.

Years later Max Factor overtook Leichner as the preferred makeup. Their pancake foundation was applied with a wet sponge. It dried and cracked and left your skin drier than the Simpson Desert after a ten-year drought. It was replaced with Panstik, which came in twenty different skin tones but never quite managed to look as good as five and nine Leichner, even though it had a snazzy dial up movement in the case. These days we have wand mascaras and so many foundation choices in a hundred different colours for the stage, with glittering eyeshadows and lipstick loaded with sparkles. But back to the good old days – and that one night in 1948. 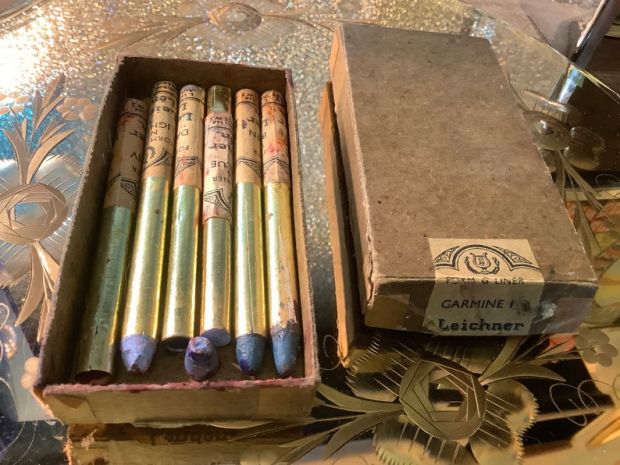 Nana must have thought she was seeing things when she entered the dressing room with my Grandad. There was this precocious brat with blonde ringlets (Sing out Baby June) dancing round the dressing room and singing “I’d like to get you, on a slow boat to China” (my go to performance piece), looking for all the world like a camp gargoyle who had escaped from Notre Dame. Green covered most of my eyes up to my eyebrows, and my attempts at black eyeliner just looked as if I hadn’t slept for a month. It wasn’t helped by the fact that I appeared to have no eyelashes because beading was simply beyond me … and still is. The carmine made my lips and cheeks match … and practically join up. The streaks of numbers 5 and 9 weren’t blended … The effect was something akin to the offspring of a giraffe and a zebra.

My Grandmother was furious. She yelled so loud that the ASM had to knock on the door to tell her she could be heard on stage. Full of theatrical superstitions, she reminded me that you NEVER… EVER… USE SOMEONE ELSE’S MAKE-UP. I’m sure she didn’t know - and I certainly didn’t - that the tradition had started because in Shakespeare’s time, powder was blended with arsenic (talcum was very expensive) and caused hideous disfigurements and sometimes death. I had broken a rule, even worse than whistling in the dressing room, or always stepping on stage with your right foot. She was so angry she swept the poor makeup box off the dressing table, as if it was somehow complicit in my transgressions. I was too scared to ever touch it again. 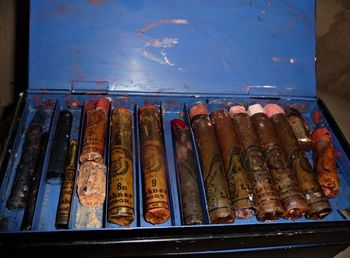 My grandmother was a charismatic but fierce woman, but I loved her dearly. She was part of the magic that was theatre; the second generation of her family to “tread the boards”. I was the fourth and my daughters and grand-daughter the fifth and sixth.

Some 15 years later, when I did my first season of Repertory as an actress, my parents bought me a makeup box of my own. It was black and shiny and had a full-size mirror inside its lid. I looked and looked for the magic inside, but I could never find it. Some things are best left to memory. 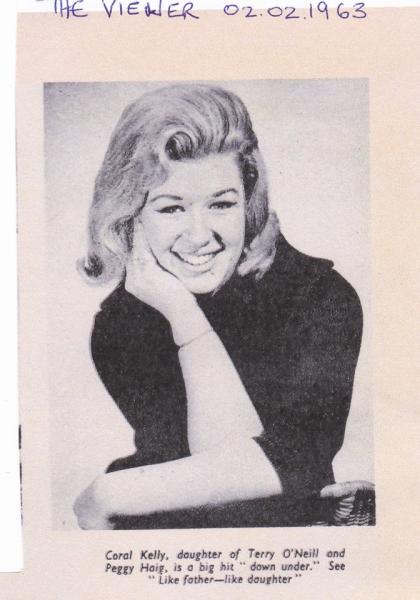 I wish they had given me my grandmother’s make-up box, but it got lost, along with hundreds of spectacular costumes, in storage, when my parents forgot to reclaim it. I like to think, romantically, that it was sold at auction, as unclaimed items so often are. I wish I could have seen the look on the buyer’s face when they opened the lid – and let the magic out!