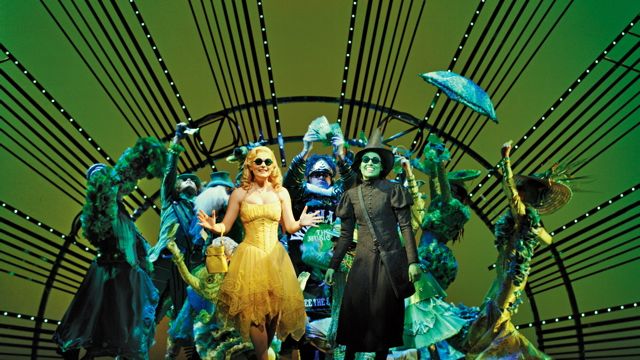 With composer / lyricist Stephen Schwartz’s latest musical Wicked recently opened in Sydney, Peter Pinne looks at why Schwartz ranks right up there alongside Stephen Sondheim, Andrew Lloyd Webber, Rodgers and Hammerstein and Lerner and Loewe with musical theatre audiences ‘down under.’

Stephen Schwartz had his first break in 1971 with a small, off-Broadway entry, Godspell. Based on The Gospel According To St. Mathew, this soft-rock, pop-biblical show took off and ended up playing 2,124 performances.

Australia had its first taste of Godspell when Aztec Services and Williamson Edgley Theatres, opened the first local production six months after Off-Broadway at the tiny Playbox Theatre, Melbourne on November 15, 1971. It was two days prior to its initial London opening. With a cast that included Colleen Hewitt, Collette Mann, Christopher Pate and George Spartels, the show stayed around for 504 performances, helped no doubt by Hewitt’s recording of the hit song “Day By Day,” which topped the local charts.

With the Melbourne season going gangbusters, the producers decided to mount a second production to play Sydney. Opening April 10, 1972, with a cast headed by Peita Toppano, John Waters, and Marty Rhone, the show was just as successful in the harbor city playing 507 performances. The two companies subsequently toured in tandem to other capital and regional cities, racking up a phenomenal 700 performances on the tour alone. The show played its final performance at Lismore Town Hall on December 19, 1973. Godspell has frequently been revived, (a 1992 prodction at the Sydney Opera House featured Avigail Herman), and is one of the most popular musicals on the pro-am circuit.

Australia’s love affair with Schwartz continued with Pippin, a Broadway success in 1972, had legendary direction by Bob Fosse, and made a star out of Ben Vereen. The story had the son of the emperor Charlemagne searching for fulfillment and encountering war, sex and revolution, before finally settling for a life of domesticity with a wife and child. The score was a pleasant soft-rock affair, with agreeable songs, and a hit “Corner Of The Sky.” The local version opened at Her Majesty’s, Theatre, Melbourne, with pop star Johnny Farnham, in the title role, Colleen Hewitt, as his wife, and a star studded supporting cast that included, Nancye Hayes, Ronne Arnold, and former Tivoli and variety performer, Jenny Howard. It did solid business, playing successfully for four months before moving to Adelaide, July 6th, and later Sydney, where it opened August 10.

Next up was The Magic Show, another Broadway hit, which Aztec Services and Michael Edgley International put into Melbourne’s Princess Theatre. It was about a fading New Jersey Night-Club, who is rescued from insolvency by hiring a magic act. Illusion was the name of the game, and the show abounded in it. Larry Anderson, imported from the U.S. was the magician, (played on Broadway by Doug Henning), Ross Skiffington was his understudy and also played Goldfarb, and the cast included pop singers, Samantha Sang and Wendy Stapleton, with Natalie Mosco and Jon Finlayson, amongst the supporting players. The score was again in Schwartz’s identifiable soft rock style, but lacked any hits. It played for almost three months, from August 2nd to October 18, 1975, but failed to tour.

Working, a 25 performance, 1978 Broadway flop, was the next musical that featured Schwartz songs, but it also featured songs of others including, James Taylor, Mary Rodgers, and Craig Carnelia. Based on a book by Studs Terkel, about the dreams of ‘ordinary people,’ it opened November 5th, 1996, at the Glen Street Theatre, with a cast that included Neil Fitzpatrick, David Argue, and Margi de Ferranti. It later played a season at the Q Theatre, Penrith. The actual Australian premiere of the show had been in 1983 at Perth Secondary College. A professional production, adapted for Australia with permission by Schwartz, just failed to get off the ground in 1985. It was within a week of starting rehearsals.

Schwartz’s musical version of The Baker’s Wife, based on the French movie, La Femme de Boulanger, by Marcel Pagnol and Jean Giono, had closed during its Broadway out-of-town tryout. Produced by David Merrick, it had starred Patti Lupone and Topol, (who was later replaced by Paul Sorvino). It was obvious the show had problems, which Trevor Nunn tried to fix, but failed, in a reworked version in London October 27, 1989. The show contains what is possibly Schwartz’s finest score, and lives on because of it. The ravishing song “Meadowlark,” (every soprano’s favorite audition piece), was cut during the Broadway out-of-town tryout, supposedly because Merrick thought it was too long for a ballad, and to stop its performance he went into the orchestra pit and tore up the music. This imperfect show had its Australian premiere by Festival Theatre Company at the Alexander Theatre, Monash University, Melbourne, June 11, 1993. Geoff Harrison played the Baker, Gina Hogan his wife, and Melissa Langton was Denise.

Schwartz returned to the bible, actually the Old Testament, for Children Of Eden, a show that opened at London’s Prince Edward Theatre, January 8, 1991, and played 103 performances. It told the story of Adam and Eve, and Cain and Able in the Garden of Eden, and Noah and the Ark, before, during and after the flood. More an oratorio than musical, the score contains some terrific songs in a pop-rock vein, “Stranger To The Rain,” “In Whatever Time We have,” and the title tune. It’s a big show, with a big chorus, which is why it’s become a favorite on the local pro-am circuit. The most recent production was by Brisbane’s Harvest Rain Theatre, who staged it last year at their Sydney Street Theatre, New Farm, Brisbane, opening March 2, 2007.

Which brings us to Wicked, his biggest blockbuster yet. Opening at the Gershwin Theatre, New York, on October 30, 2003, thirty years after his first Great White Way success, it has consistently been the highest grossing musical on Broadway where it is still playing. Based on Gregory Maguire’s novel, a prequel to The Wizard Of Oz, it tells the story of what happened in Oz before Dorothy dropped in – of two girlhood friends, Glinda and Elphaba, and how they became the Good Witch and the Wicked Witch of the West. With lavish over-the-top sets and costumes, and a high-powered score, it’s the ideal family show. And that’s what Stephen Schwartz is all about – family friendly entertainment. That’s why he was a comfortable fit at Disney in Hollywood in the 90s, where he wrote lyrics to Alan Menken’s music for Pocahontas (1995), (winning an Oscar for “Colors Of The Wind”), and The Hunchback Of Notre Dame (1996), and music and lyrics for Dreamworks’, The Prince Of Egypt (1998).

Wicked had its Sydney premiere at the Capitol Theatre on September 12, after playing 464 performances at Melbourne’s Regent Theatre, following its Australian premiere on July 12 2009.

Based on the article originally published in the July / August 2008 edition of Stage Whispers.