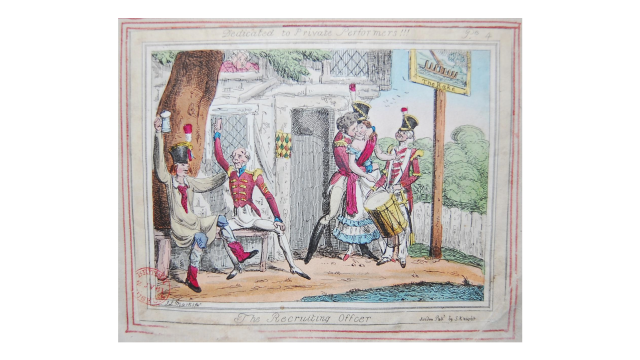 On 4 June 1789, a little over a year after the First Fleet arrived in Sydney Cove, a “party of convicts” presented the lively comedy The Recruiting Officer to celebrate the birthday of King George III.

The play, a favourite of the time, was performed in “a convict-built hut” and honoured by the presence of His Excellency the Governor, Captain Arthur Phillip and an audience of 60 officers and their wives.

The only way we know about this significant event is due to the writing of Colonel David Collins, who stated: “The aims of this first company of players were modest. They professed no higher aim than humbly to excite a smile, and their efforts to please were not unattended with applause.”

The Recruiting Officer was written by the Irish playwright George Farquhar in 1706, and follows the social and sexual exploits of two officers on a recruiting drive in the town of Shrewsbury. The play enjoyed great popularity throughout the 18th century and was performed everywhere from London playhouses to provincial towns, and country fairs, as well as colonial Australia.

Governor Arthur Phillip makes no mention of the performance in his official report, perhaps fearing the response from the authorities in England. Convicts were not supposed to be enjoying themselves, were they?

Author Thomas Keneally based his novel The Playmaker on the performance, which was later adapted into a play, Our Country’s Good.

Cultural historian, Dr Heather Clarke explores the history, and the dance and music associated with the play at https://www.colonialdance.com.au/the-recruiting-officer-357.html

Check the website for other stories of convicts, sailors, and settlers, all examined through music and dance.

© The Trustees of the British Museum