Theatres on Fire – The Victorian Curse. 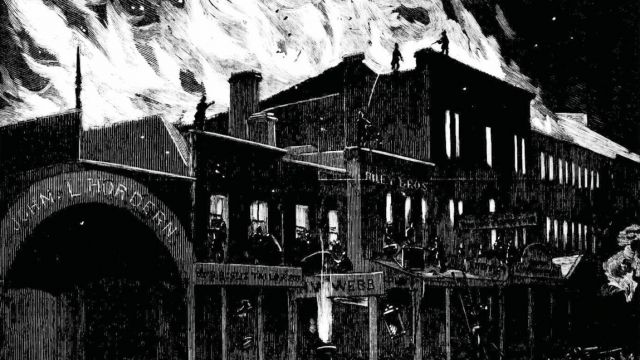 In late 19th century Australia, theatre fires had become so common that one of the most popular medicines of the time was advertised under the somewhat misleading headline, “A Theatre on Fire”.

Advertorial for a patent medicine told readers that “panic was averted” and “fire was got under (control)” due to the quick thinking of an actor who had the wherewithal to perform the Sailor’s Hornpipe after the outbreak of fire. The moral of the piece being that “if we only have the presence of mind to think of Holloway’s Pills and Ointment all will be well and danger need not be feared”.

Unfortunately, the risks of fire in theatres during the 19th century were very real. A newspaper article published in 1897 claimed that “732 theatres have been destroyed by fire” leaving victims “numbered by the thousands” since the middle of the previous century.

One of the worst theatre fire incidents cited by the article is The Lehman Theatre fire of December 1836 in St Petersburg, Russia. A circus was performing when a stage lamp caused the roof to ignite during the performance, the fire spread rapidly, resulting in the deaths of about 800 people, the majority of whom were killed by trampling. The article concludes with a call for the establishment of rigid regulations for places of public entertainment. In Australia the Royal Commission into the Construction of Theatres and Places of Public Amusement had already delivered its findings (1887), however its recommendations were not to become law until 1909.

Often the causes of these fires were never ascertained. A fire at Sydney’s Theatre Royal in 1892 completely destroyed the auditorium but miraculously spared the stage and backstage areas, even before the use of the now mandatory fire curtain. It was blamed on a smoker’s discarded match in the gallery. But in most cases the cause was never discovered and the theories were merely supposition on the part of the press.

Just why so many theatres succumbed to fire may seem obvious. 19th century theatre structures were made of highly flammable substances, primarily wooden, sometimes with a cloth or canvas covering. Large swathes of fabric were used as curtains and drapery.

Backdrops were frequently painted layers thick with highly flammable oil based paints. There was no fire retardant in existence at the time. The need to light the spaces appropriately for the performance often relied on naked flames and gas supplies.

A description in The Australian helps us to imagine the flammability of a typical 19th century theatre, the Royal Victoria Theatre in Sydney. “The interior of the house is neatly decorated — the whole of the three tiers being panelled alike, and the rose, shamrock, and thistle being gilded successively in each panel in a small circle in the centre. The drapery of the proscenium is of a very rich crimson, fringed with gold, and the Royal Arms, with the motto, "Juste Judicato," immediately surmounts it. The stage is particularly commodious; and the scenery, which reflects infinite credit on Messrs Shribbs and Winstanley, the artists, moves with as much regularity and ease as we have witnessed at some of the London Theatres. In the centre of the house, there is suspended a splendid glass chandelier, with twenty-four lamps — and two smaller, but corresponding ones, are situated at each side of the stage”.  (The Austalian 30/03/1838, p2)

An 1898 study of the causes of fires starting on stage found that 19.2% of cases were caused by open lights, 9.2% by lamps and 22.8% were caused by defects in gas installations, which were hard to detect as gas at that time was still odourless.However, electric lighting, which came into limited use in the 1880s, was also frequently problematic.

In 1894 the Princess Theatre Melbourne transformer room ignited as the stage hands prepared the theatre for the evening’s pantomime. The room contained all of the storage batteries for the electric lighting. With the assistance of the fire brigade the stage hands extinguished the blaze. “The electric lighting appliances, however, were thrown out of use, and as there was not sufficient time to replace them, the pantomime had to be carried on with gaslight.” The cause of the fire was described as being from the “fusion of wires”

At the Bijou in Melbourne one evening in 1897 at “about 10 o'clock Miss Elsie Adair appeared to dance. For the purpose of effect the theatre was darkened, the lights being turned down, and the limelight played on the dancer. The young man appointed to look after the lights did not seem to properly understand how to darken the incandescent lights in the dressing-room, and covered them with a cloth, instead of turning off the electric current.”  (Goldfields Morning Chronicle 1897) Eventually the cloths ignited and the electric globes exploded. A quick-thinking member of the audience threw the cloths in some water and turned off the electrical circuit, averting disaster.

Ignorance of the new electric lighting caused audience members problems too. A full house was in attendance at the Princess Theatre in 1897 for a matinee in aid of the actors’ benevolent fund when the cry of “fire” went up upon the smell of smoke. A stampede very nearly ensued.  It was discovered that a “woman’s cape caught fire when she threw it over a globe on taking it off in the theatre”, presumably using the globe as a coat hook.

Stampedes were often a bigger cause of death than burns in situations of fire, and in many cases patrons were killed where the fire alarm had been false. Often the gallery was built with a single point of access and a single staircase; there were no designated fire exits. Added to this, gas supply would be turned off in the event of an emergency, plunging the building into darkness. People would often fall, or trip, over their lengthy garments, resulting in trampling and asphyxiation, or simply be crushed to death in the ensuing commotion.

On the evening of the 9th June 1895 during a performance of Gounod's opera Faust at Covent Garden Theatre, the scenery caught fire, and a panic occurred among the audience, many of whom rushed for the doors. The play was stopped, and Nellie Melba, who was playing the part of Marguerite, appeared before the curtain in her stage costume, and “by her voice and presence secured the attention and calmed the apprehensions of the audience. The fire having been extinguished the opera went on, after Madame Melba had been heartily cheered by the audience for the coolness and presence of mind which had promptly checked what threatened to be a very serious panic.” (The Age 1895)

Theatre goers in the Victorian age were also at risk from their predilection for realism and spectacle. The reason the scenery caught fire in Melba’s Faust at Covent Garden was because Mephistopheles entered to the accompaniment of “red fire”.

At the Mechanics’ Institute in Albury in 1895 during a performance a scare was caused owing to an accident with some coloured firelights.

“The operator was pouring a chemical preparation from a bottle, when a spark from the pan in which the fire was burning communicated with the contents of the bottle, and a large flame was caused. Before the fire could extend to the scenery the water kept in buckets on the stage for such emergencies was dashed on the fire, and it was quickly extinguished.” (Evening News,1895)

However, sometimes human intervention made things worse.  In September 1896 at Esperance Theatre a wire-walker named Martin dropped a burning hoop on to the stage. The newspapers reported that “an exciting scene ensued. The scene-shifters rushed forward, and poured a tin of kerosene on to the flames in mistake of water. Gigantic flames rose to the ceiling, and the people commenced to rush out. A panic was prevented by the proprietor calmly walking along the stage extinguishing the flames with a bucket of water”.

Sadly the fires that did take hold not only took people’s lives, but they also robbed people of their livelihoods. Scenery, wardrobes, musical instruments, sheet music and properties were often not included in the insurance policies on theatres, and were not insured separately. Many performers lost the tools of their trade. In the Tivoli fire of 1899, £3000 worth of pantomime appointments were lost including all of the properties of the very popular Australian pantomime Jack the Giant Killer.

The Theatres and Public Halls Act of 1908 came into operation at the beginning of 1909 and regulated such things as the use of the fire curtain, limiting audience numbers, keeping corridors and passageways clear, no smoking during periods that the theatre was open, no wooden chairs and the requirement for external doors that opened outwards. Each premises was to be licensed and stringent penalties were handed out for licensees not adhering to the regulations.

These new regulations did notably reduce the number of people injured when exiting theatres where fires had broken out. They also led to better containment of fires by dividing the auditorium from the stage by the fire-proof curtain. Thankfully as building and safety standards have improved a trip to the theatre is no longer the risk it was in the days of our forefathers.

Originally published in the Juky / August 2017 edition of Stage Whipers.