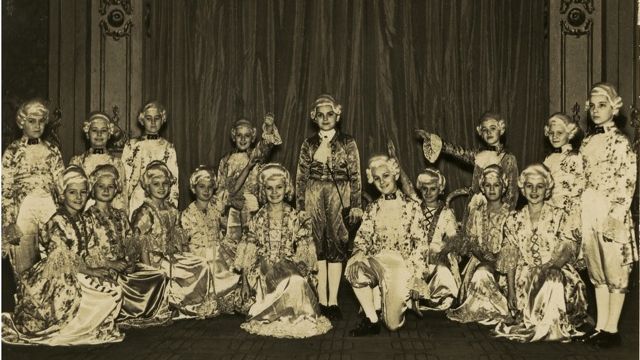 Just over a century ago a scandal involving children in a theatre troupe made headlines across Australia. Children subject to abuse were left stranded on an overseas tour. Leann Richards reports.

In the mid 19th Century, child labour was common. Children were considered the property of their parents and governments were reluctant to interfere in the privacy of the home.

Children had long been a feature of Australian theatrical performances. Carrie Moore and Ivy Scott started with J C Williamson as youngsters, whilst the Tivoli featured several juvenile performers such as Baby Parkes. In the 1880s, Tom Pollard had great success with his Lilliputians, a troupe of children who performed Gilbert and Sullivan and other comic opera pieces to great acclaim in Australia and New Zealand. As the 19th Century closed, Government began to regulate child labour but the developments were slow.  State governments were responsible for child welfare and educational laws, and were reluctant to interfere in the private, family sphere.

In the late 1880s, several theatre entrepreneurs were prosecuted for employing performers under the age of 10 for profit. However, the penalties were small fines which were insignificant when compared to the amounts a child artist could make for an enterprising manager. In these years the use of minors in the theatre was being challenged mainly by middle class philanthropic groups who saw the theatre as a morally corrupting influence.

However, in 1910, a scandal erupted that brought the matter to the attention of a much wider audience. In 1908 Arthur Pollard  (the brother-in-law of the well respected Tom Pollard) approached several parents in Melbourne and Sydney about employing their children in his family’s touring company.

He promised to educate, house and feed the children. He also promised to pay the parents between 10 to 15 shillings weekly. The Pollard name was well known in theatrical circles and some of the families had theatre experience. The prospect of fame, combined with financial reward, persuaded them to allow their offspring to join the troupe.

Over twenty performers between the ages of 7 and 19 were recruited. They rehearsed some musical comedies including The Belle of New York in Australia, and in July 1909 sailed from Melbourne for India via Malaysia. Almost immediately after leaving Australia there was trouble. Arthur, a married man, reportedly began an affair with 19 year old Irene Findlay. The attention that Miss Findlay received was a source of jealousy for the other teenage girls in the troupe. They began to break the rules, but the reaction of their manager was, by all accounts, excessive.

According to later court depositions, in Malaysia, one of the teenage girls was severely beaten by Pollard for going out in a car without permission. Later, in Bombay, another girl was violently assaulted for talking to the family of a jockey. In addition, according to one report, a much younger girl had been forced to take the stage when she was seriously ill. The poor child collapsed and was carried home.

Later it was revealed that Pollard had also reneged on his promise of education. The school mistress, Ruby Ford, admitted to a court that she was just another member of the company and was neither qualified nor asked to teach. The company was in disarray by the time it reached Madras. Whilst there, some of the older children petitioned the police for help, but no aid was forthcoming. So they turned to Mr Rouse, a member of the Society for the Prevention of Cruelty to Children.

This organisation grew from the efforts of a New York church worker, Etta Wheeler, who attempted to aid an abused child in 1875. Wheeler found it necessary to approach the Society for Prevention of Cruelty to Animals to help the child as there were no other legal solutions available.

Mr Rouse, an eminent member of the Anglo Indian community, confronted Arthur Pollard about the abuse of the girls. Somehow he persuaded Arthur to give up custody of the troupe. About a day later Pollard changed his mind and sued Rouse for kidnapping.

By April 1910 the scandalous affair was being reported in Australian newspapers. Rouse’s trial was avidly followed in the press and every allegation of cruelty was publicly aired.

The Indian court decided in Rouse’s favour. It declared that Pollard was unfit to care for minors, and, in a decision that reflected the values of the Society for Prevention of Cruelty to Children, declared that the court had an obligation to act as a parent and in the best interests of the child. This judicial activism reflected the growing role of state authority in family matters. The magistrate cited Pollard’s cruelty and relationship with Irene Findlay as determining factors. The adulterous relationship was a major problem, as immorality was considered contagious, especially to the young.

Upon hearing the verdict, Pollard, accompanied by Irene Findlay and the company’s profits, fled to the French zone of India.

The children and the adult employees of the company were left to find their own fares back to Australia. The children gave performances, the local population raised money, and finally the orphaned company found their way home. Their arrival in Australia was greeted with tears, sentimental cries of ‘mummy’ and parental caresses.

The incident had a major effect on the employment of Australian children in the theatre. In November 1910, the Commonwealth Government passed a law forbidding the transport of children outside Australia for theatrical work. The passage of the bill mentioned the Pollard affair, and although the law had exceptions, it significantly restricted the use of Australian children in overseas touring companies. The act also marked a significant Commonwealth intrusion into family welfare issues.

It was a humiliation for the Pollard family. The well-respected Tom Pollard was forced to disband his well respected Lilliputian Company shortly after the passage of the bill. As for Arthur, he died in New Zealand in 1940 and was mourned by his second wife, Irene.

Images of child performers come from a number of sources and are not members of the Pollard company.