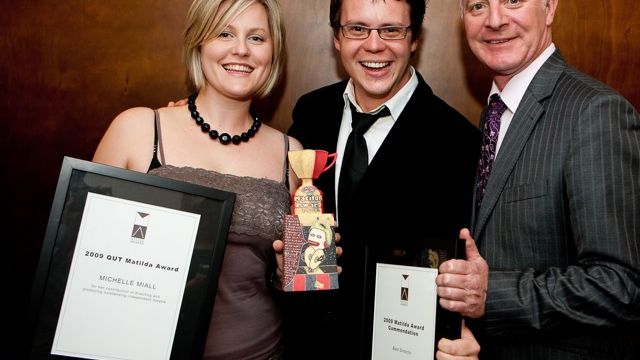 The would be’s, could be’s, and never will be’s were all out in force when Brisbane’s annual theatre awards for excellence – the MATILDA AWARDS - were handed out on Monday 19 April, in front of a packed industry audience of over 300 people at the Judith Wright Centre. Now in their 23rd year, the Matilda Awards are judged by a panel of Brisbane based newspaper, radio and website theatre critics.

The five major Matilda Awards went to: Sven Swenson for his contribution as a writer, director and an actor; Michael Gow for his 11 years of programming as Artistic Director at Queensland Theatre Company; Michelle Miall for direction, in particular for her production of The Pillowman; Playwright Richard Jordan for his new play 25 Down (Queensland Theatre Company); and Metro Arts for its Independents’ Season. These five winners were each presented with a specially commissioned trophy designed and made by Brisbane ceramic artist Pru Morrison, who is a well known Queensland artist who has had several solo exhibitions.