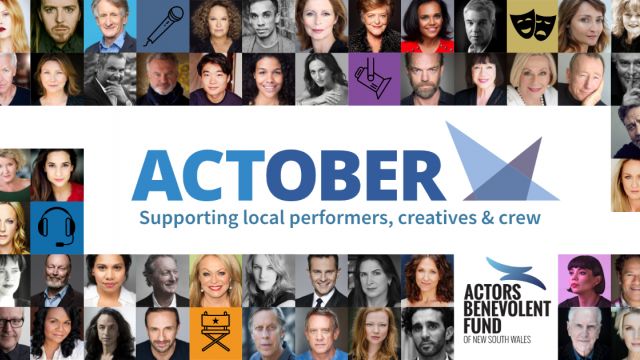 This October, Actors Benevolent Fund of NSW introduces ACTober, asking you to support arts performers, directors, designers, creatives, technicians and crew.
In 2020, through lockdown and home isolation the performing arts have been our lifeline to the world.  We have been entertained by creative artists and actors on streaming services, podcasts, audiobooks, concerts, cabarets and performances on Zoom.

For the performing arts practitioners 2020 has been devastating.  Thousands of events, film, TV and theatre productions, festivals, performances and concerts have been cancelled or postponed, leaving countless numbers of performers, creatives, technicians and venue workers out-of-work.

Now throughout the month of October, audiences can show their appreciation for the many performing arts workers who sustained them through the loneliness of lockdown by donating to ACTober, a major fundraising appeal that will run through the month of October. It is an opportunity to spotlight the struggle of an industry, and the people within it, inordinately impacted by the ongoing crisis.

The idea for ACTober was originated in NSW by the Actors Benevolent Fund of NSW to raise much-needed financial support for performing arts workers.  Over the past two years Sydney audiences have become familiar with Actors Benevolent Fund volunteers rattling ACTober collection buckets in theatre foyers across the city. This year, due to social distancing, this is not possible and ACTober has gone entirely on-line.

It is also the first time that ACTober will be run as an Australia wide campaign.

Six Actors’ and Entertainers’ Benevolent Funds from across Australia and New Zealand have united in an Alliance with the common goal of helping performing arts workers across the country. Each organisation will fundraise in their home state to support their local arts workers.  Every dollar donated to NSW stays in NSW.
All Alliance members are volunteer-run, not-for-profit organisations that annually assist hundreds of performers, directors, designers, writers, technicians, stage and venue crew when they face tough times often due to illness, accident, age related issues and something as unprecedented as the shutdown of the entire industry.

While some Australian venues are tentatively re-opening with productions playing to limited audiences, many small companies and theatres may never open their doors again. The days of sitting shoulder to shoulder in a packed theatre are still a long way down the road and in the meantime our arts workers and theatres are struggling to survive.

Since 1944 Actors Benevolent Fund of NSW has been helping our artists and arts workers to survive the difficult times and our help has never been needed more than now.

During October you can donate at actober.com.au to the fund in thee state of your choice.

Your generosity will enable Actors Benevolent Fund to continue to provide a financial safety net to our performing arts workers.  You can make a real difference in these difficult times.

About The Alliance
Formed in 2020, the Alliance of Australasian Performing Arts Benevolent Funds (AAPABF) represents the region’s leading arts industry charities, funds and trusts. The purpose of the Alliance is to act as an overarching advocacy group at both a national and international level.

The six Benevolent Funds are all volunteer, not-for-profit organisations. Each individual member Fund continues to remain responsible over its own governance, fundraising, and provision of support to local performing arts workers, but the Alliance allows the Funds to utilise a shared voice for advocacy.
The formation of the Alliance has been supported by Cate Blanchett.

The six members of the AAPABF are: