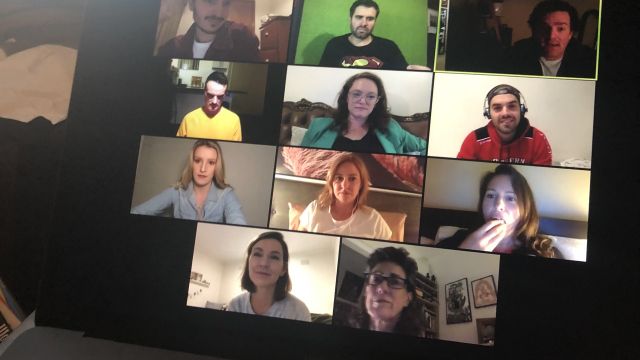 The generous spirit of Arts workers is continuing in their darkest hour. Actor and writer James Millar (best known as Matilda’s nemesis - Miss Trunchbull) has helped initiate a project involving 225 artists, who are developing new plays and musicals.

It’s unusual writing an article on being a performing artist during a global pandemic - partly because it feels like there’s nothing to say that isn’t a shared experience, but at the same time not knowing which particular avenue of its destruction to explore.

Since Covid-19 crept cunningly into all of our homes, workplaces, minds and communities in one way or another, the word “essential” has taken a front seat in our discourse (along with - of course - “epidemiologist”, “isolation”, “quarantine” and “distancing”).

In some ways it is thrilling to see our essential workers being rightfully hailed as superheroes - in other ways it’s concerning to see what governments and some sections of society don’t deem valuable enough to recognize.

Tireless members of unions and industries - including the one I work in, the Arts - are daily fighting that battle for representation and respect in a world that obliterated new and long-term careers and made a temporary wasteland of our performance spaces only months ago. The MEAAhas beencompelling, passionate and mighty to watch in battling to garner some decent governmental response to this unprecedented destruction of a multibillion-dollar industry.

But for now, I’d like to write about a couple of experiences in my little corner of Iso-World to share a positive view about the resilience, resourcefulness and resounding generosity of Arts workers.

When Covid-19 slowly began to reveal itself as a tenacious beast that was not going to lie down and suddenly disappear, but rather develop a mightier and more voracious appetite as it fed, there was an ominous sense that whispered, “Oh, gosh. If this thing gets here we aren’t going to see a play, a concert, a cabaret show, a movie at the flicks, a standup comedian or a TV studio audience for a very long time.”

It wasn’t until we watched the legal number of people allowed to gather diminish daily, over the space of just over a week, that a sense that a massive invisible fire had just burned down every performance house across the entire planet - sparing none - became horrifyingly apparent.

It’s been inspiring to watch members of our local and international performing arts industries pull themselves back up off the floor to answerthe question: What else can you do?

The answers, for those who needed one for their sanity, are surprisingly abundant and exciting.

Before I dive into it, I’d like to make it clear that I do not believe that artists should ever work for free. I also don’t believe that the virtual space of the land of the Internet should ever, or will ever, replace the communal and cultural joy of live professional entertainment.

I’m sure you’ve noticed, even if you aren’t a particular social media glutton like me, screen grabs of Zoom meetings bouncing up everywhere: namely - those shots of people at home with crappy hair looking like they’re on a cheap version of the opening credits of The Brady Bunch.

Seven or eight weeks ago, these online meeting rooms were best known to remote business workers or international corporations needing to connect over large distances in a “virtual boardroom”. Little did we realize that these would so swiftly turn into one of our biggest socio-cultural lifelines, from the remote islands of our own homes.

My experience came after writing a Facebook status, pondering that now might be a good time for stage writers with fledgling, recently developed or mid-development projects to “virtually” undertake table-reads. So, along with my associates Meg Deyell, Robert Tripolino and Christian Cavallo, the four of us formed Hope: A New Work Development Initiative.

Actors, directors and dramaturgs are now exercising their craft, meeting and connecting with members of the business they may never have met to help new works develop. 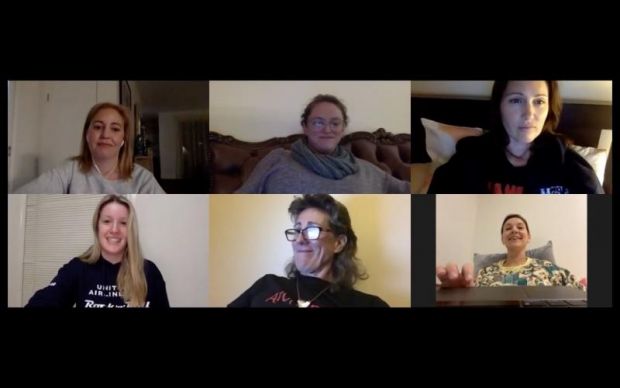 Christian, a recently graduated director from VCA and a graphic designer, helped facilitate the 225-strong army of generous creatives who volunteered. Next, Rob, who was in the middle of a flourishing international career as an actor in Music Theatre and had just lost a major US contract as Jesus in JC Superstar, jumped on board - offering, like magic, his family-owned theatre “The Palais” in Geelong as our virtual mothership and possible place to actually do readings before social distancing forced us onto the virtual space.

Finally, the brilliant and much-loved Meg Deyell - a seasoned stage manager and director who, in her co-creative directorship, has kept us on-goal, organized and proof-read. A small troop of four, who certainly didn’t know they would be working together.

In Meg’s words, after losing nine out of eleven contracts for 2020: “I joined Hope: New Works as a way of keeping the momentum of our industry going, even in a small way, when everything is grinding to a halt. It’s also critical for our mental health for artists to keep engaging in our craft, in whatever capacity we are able to. I’m excited about nurturing these shows in their infancy so that when we do get back on our feet, we are ready to run.”
This unexpected collective have the wheels set in motion for the development of 11 new pieces of theatre and music theatre. At the time of writing, three have already been recorded as “packages” for the writer, after two or more weeks of autonomous development time with their teams. The chief purpose is the process of development itself, and the package being a recorded resource for the writer to revisit in order to continue to develop their work down the track, when, as Meg states, they are back on their feet and ready to run.

It was essential to us that these developments be private, as their purpose is for the future of professional product.

New works for Round 1 are:

• Amity Dry's The (M)other Life, a tale of four best friends who meet every Friday in a cafe to discuss career, relationships and parenthood.

• Diana Simmonds' The Sooterkin, an adapted Australian fable about a seal, born into a human family and hunted as "a miracle of science".

• Josh White's The Mentor, read by Amanda Muggleton, about a young actor’s relationship with a famous former movie star.

• Neylon and Peele's Beau Wants To Be A Billionaire, a high energy musical farce about Beau - a down-on-his-luck guy, whose entire life changes after an appearance on "Who Wants to be a Billionaire".

• Jessie Monk's Conversations With Berlin, a play about a young woman's relationship with the city of Berlin, where she finds herself alone – 10,000 miles from home.

• Michael Bingham, Nicholas Gentile and Brittanie Shipway’s Coburg, Melbourne, an epic romance between a young music student and his relationship with a nurse in a segregated Australian community in war torn 1939.

• Geoff Wallis' The Lorelei and the Siren, an absurdist musical comedy about a group of people isolated on a cruise ship at an Antarctic research base.

• AJ Ridefelt's Tied Up With Strings, a new musical being built from the ground up across the season, about a compulsive hoarder and her neat-freak sister - and a hoard that comes to life.

• Vicki Larnarch's The Water Code, a new musical about a writer on retreat who miraculously connects to an alternate reality of the land she is on while trying to write a new work.

All casts will be revealed weekly, with highlights of their reads shared. 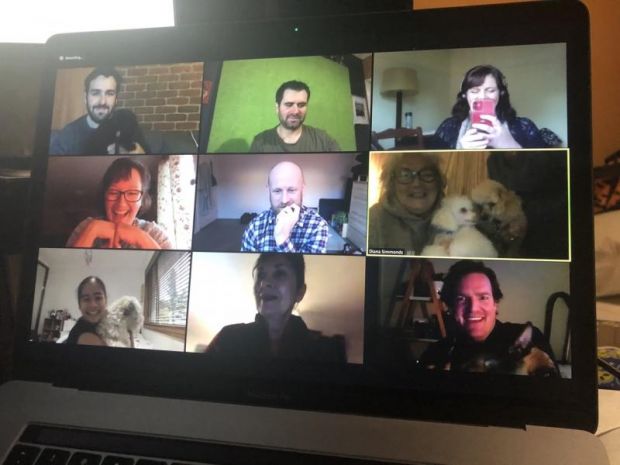 The result, so far, has been wild, and the brainchild and product of all involved - not one. Watching esteemed actors working with amazing writers, dramaturgs and directors in email threads and video conferencing - asking questions of the work, reading new scenes and songs, and letting the story “live off the page” - has been invaluable to the works and also to the spirits of everyone involved. A feeling that “we communed to create for the world to come” is prevalent and moving. It’s also given everyone involved a sense of their skill still being aloft and energized, despite the noise from the world outside.

It has been equally rewarding to see the masses of similar initiatives flowing across social media. An evening with Trevor Ashley on Sunday nights; the amazing enterprise of the Old Fitz to produce a live reading of Orphans with Alec Baldwin; Troy Sussman’s cooking classes; JRP’s Lights Up On The Arts program; “Watch This” series The Art of Making Art; the National Theatre At Home series; and the amazing work from the Australian theatre companies and independent sectors. It is thrilling to see the platform put to use for one purpose: to maintain community.

In short, this is a (hopefully) once-in-a-lifetime period for us all, until all of our businesses and marketplaces and centres for gathering and sharing our work are rebuilt. In terms of the Arts, these platforms haven’t replaced a profession as they are not our professional spaces, but I think there is great cause to celebrate the way in which they have been used to keep our profession connected and creating. We may not have our jobs, livelihoods, incomes and performances with us for the time being, but my hope is that the salvaging of community in this way will mean that we have them again, stronger, and in abundance when we are rebuilt.

More info on Hope: New Works Development Initiative can be found at www.hopenewworks.comwith sample highlights of the developing pieces posted weekly along with details of the creatives involved in each.