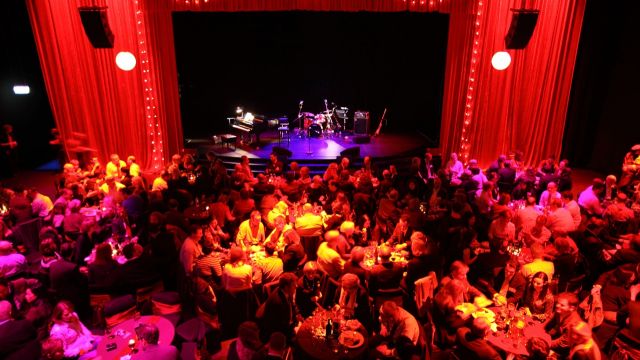 David Campbell’s second Adelaide Cabaret Festival as Artistic Director, with Natalie Cole as headliner, opens on June 11. The festival has hundreds of artists and is now so big it even has its own cabaret fringe.

“We really wanted something to push the Festival up to another level. The fact that we got Bernadette Peters last year raised the stakes, and the festival, frankly, needed it,” says David Campbell.
“It was starting to get in danger of marginalizing itself. Just the same people trotting out shows of a different caliber, like such and such sings Cole Porter, such and such sings Gershwin. That’s what I saw happen in New York – no-one was doing original voices anymore – just backing themselves into a corner.”
Bernadette Peters lifted the bar as headliner last year and broke box office records.
“The fact that Natalie Cole, who has just won her ninth Grammy, is coming out to do two shows exclusively raises the bar.
“Last year the festival was very glamorous, but we wanted to put a bit more darkness and meat into it. So we’ve got Smoke and Mirrors with Iota, Frisky and Mannish, and then we’ve got people like Diesel and JPY doing cabaret shows.
“Then we go back to legitimate, with David Hobson doing a cabaret show, up close and personal.
“We’ve got Stephen Schwartz doing a show with Australians singing his music.
“It’s a bigger festival now, and it’s a very commercial.”

For it’s Gala and Headliner performances on the first weekend, the Cabaret Festival uses the Adelaide Festival Theatre in its standard mode, but for the second week the theatre is turned back-to-front, as its stage becomes an intimate cabaret venue.
Festival Theatre’s Manager of Venue Services and Production, Michael McCabe, and Chloe Veith, Production Assistant, Venue Services explained how the transformation works.
“We utilize the flying system to put two lighting rigs in the air; the lighting rig that we need for the opening weekend in the Festival Theatre full stage, at the same time as we rig another lighting rig that points in the opposite direction,” Michael said.
How much of the intimate cabaret mode rig can already be in place while the venue is in full theatre mode?
“We go for about three-quarter stage depth, so anything upstage of that we’ve already got set up,” Michael said. “We pre-build the control positions which we need for lighting, sound and follow spots, and put them on the back wall of the Festival Theatre, so that’s all in place.”
“We also pre-rig a lot of our legs and drapes as well,” Chloe added. “The stuff that we do onstage is often in red, so we rig with the reds already up above the blacks.”
With the luxury of 85 fly lines, the trick is in the planning.
Some of the rig actually works for both modes, moving lights for instance, but the fixed lighting used in full theatre mode is pointed in the opposite direction to what is needed in the cabaret mode.
“That’s why we double rig, because we have such a very short turnaround time,” Michael said.
How much time is there for that turnaround?
“We’re usually finished on stage with the matinee at about 4 or 5 on the Monday afternoon,” Chloe explained. “Then it’s over to us to turn it around. We start with the first artist on Tuesday night, so we need to start plotting by Tuesday afternoon, ready for them to come, then we start performances on the Wednesday.”
“We also use the house curtain in its standard position as the entrance,” Chloe added. “The audience enter from the auditorium, so when they walk into the auditorium they see the House Curtain in, with an archway in the middle of it.
“People get a real buzz when they walk onto the Festival Theatre stage from the front, and they get to see it in that different mode.”

The 2010 Adelaide Cabaret Festival also has an eye to the next generation of cabaret performers, with a new initiative High School Cabaret, involving creative arts students from Seaview and Norwood Morialta High.
David Campbell explained.
“We go into schools and teach kids how to do cabaret, what cabaret is all about, the history of cabaret, and then they have to put on cabaret shows which people can see. Then the high school kids get graded on it, which is the first time a festival has been engaged with the Education Department like that.”