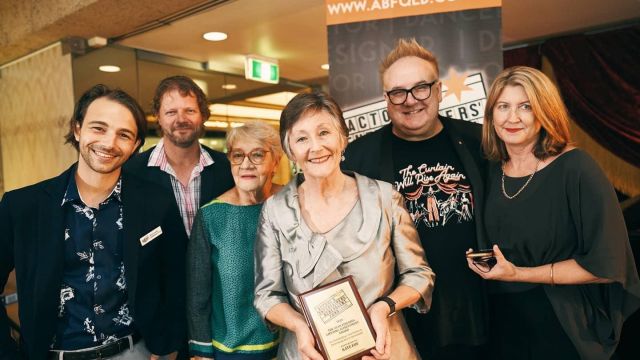 This year’s Alan Edwards Lifetime Achievement Award was presented to actor Kate Foy, or as she is known on stage, Kate Wilson. Wilson has enjoyed a major career as an actor working in theatre in Queensland for La Boite, Twelfth Night, Metro Arts, but mostly Queensland Theatre, where she has appeared in 33 productions as well as writing, directing and teaching for the company.

Her most recent credits include That’s What She Said (The Good Room), The Revisionist for Refraction Theatre (2020 Matilda Award nominee), Quartet for Queensland Theatre Company, The C Word for Metro Arts, As You Like It for Twelfth Night Theatre, Water Wars for Umber Productions (2012 Matilda Award Nominee).

On returning from London in 1972 she first trod the boards with QTC at the SGIO Theatre in 1972, two years following their inauguration, when Alan Edwards was the Artistic Director. In the 1970s she also worked for New England Theatre Company, and did many plays for Twelfth Night Theatre. Wilson has an extensive production biography in university theatre as director and voice coach. She has served in various advocacy roles most recently as Board Member and Chairman Queensland Theatre Company 2001-2021), Empire Theatre (2003-2013) and continues as a Trustee Empire Theatre Foundation.

She also has a MLitt in dramatic literature and PhD in Theatre, and worked in the USQ Theatre Actor training program for many years. At USQ she held positions of Head of department, Director USQ Performance centre, and Deputy Dean, and has also served on the USQ Council. On leaving the university she was recognized as an Honorary Professor by USQ.

She maintains a private coaching practice and dramaturgical consultancy, and is currently an Associate Professor and sessional staff member Queensland Conservatorium Griffith University in the Performing Arts Department.