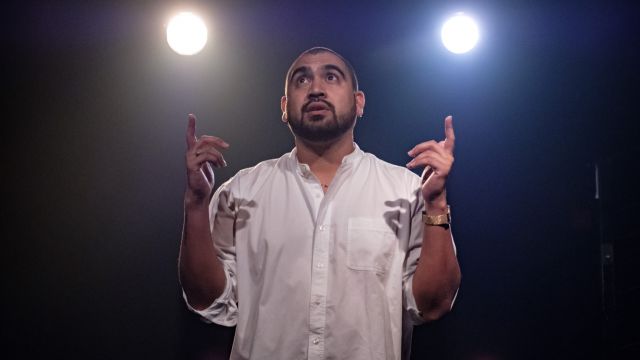 Rapper, poet and award-winning author Omar Musa brings his show Since Ali Died to Melbourne in August 2019 at the Arts Centre.

Stage Whispers: What was it about Muhammad Ali which inspired you?

Omar Musa: Muhammad Ali proudly stood up for what he believed in, against the status quo, even at a huge cost to himself and his career. I read something about him that described him as simultaneously being a master of the pugilistic science of boxing and the world’s most famous pacifist. He was sweet, funny, compassionate and brave. He was flawed. He was real. When he said he was “The Greatest”, he was really saying that black was beautiful, in a world that said it wasn’t. That had a huge impact on me when I was growing up (even though I’m not black) — it gave me a sense of empowerment at a time when I could have internalized racism and hatred - and made me think that I could live my life proudly and boldly.

Stage Whispers: What do you think he was best at – boxing or his poetry?

Omar Musa: Boxing. He was arguably the best boxer of all time. I don’t think he would make many people’s list for best poet of all time.

Stage Whispers: What is your favourite Ali poem?

Omar Musa: In When We Were Kings, George Plimpton recounts a time Muhammad Ali was giving a talk at a university. He was telling the students that he hadn’t had the opportunities in life that they’d had, and that they should use their privilege to make the world a better place. When he finished, someone yelled from the back of the auditorium asking for a poem. He thought for a second then opened his arms and said “me... WE!”, which is still the shortest poem in the English language, but says a whole lot. I have it tattooed.

Stage Whispers: How difficult was it growing up as brown skinned boy in Queanbeyan?

Omar Musa: Not as difficult as it was for a lot of other people. Yes, I faced some racism growing up, but I was very privileged in a lot of other ways. Even though Muslim-Australian identity (whatever the hell that means) is a highly contested, often controversial thing in the febrile Australia we live in, anything I have faced pales in comparison to the daily racism and injustice Aboriginal Australians face.

Stage Whispers: Would it be different growing up there today?

Omar Musa: Sure. Quite a different demographic now, and also less working class than it once was. Strange thing about a place, though — a place holds a soul, a temperament humming somewhere beneath the soil, that moves at a different pace to modern developments and “progress.”

Stage Whispers: What excites you most about the stage production?

Omar Musa: If you hit the right note, there can be a special alchemy in a stage show, where forged between people of all different backgrounds, disparate in their thoughts and persuasions, is a moment that unifies them into something magical and wondrous. It’s ephemeral but very beautiful, and there’s nothing else like it.