An American in Paris … Downunder 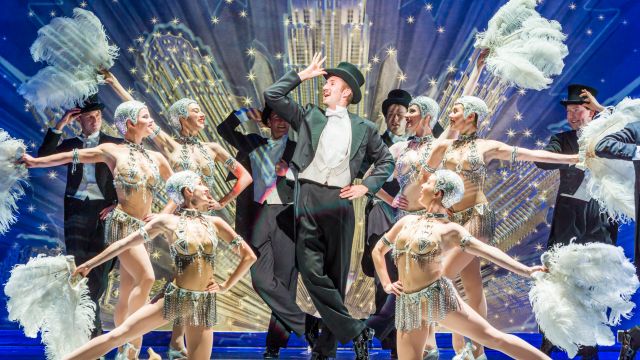 Ballet dancers are seen but not heard. Yet the musical An American in Paris requires an extraordinary mix of skills. Broadway star Robert Fairchild – on tour in Australia - explains to David Spicer how challenging the title role is.

In 2016, I scored a single ticket to An American in Paris in New York, and the combination of Gershwin’s gorgeous music, an eye-popping set, and a full ballet made this one of my most enjoyable nights in the theatre ever.

The co-star of the romantic comedy, Robert Fairchild, is reprising his role alongside fellow Broadway star Leanne Cope, in a production with the Australian Ballet that is touring the country.

The musical is based on the movie, which starred Gene Kelly, about an American GI who is about to return home after serving in France during World War 2, when he meets and falls in love with a Parisian.

The skills required for the role include acting, singing and elite dancing, which, Robert explained, are at cross purposes.

“Your ballet body is different from the singing and acting body. It was fun for me to find out how to meld the two; how to get from one to the other as fast as I could.”

Fairchild was an elite dancer with the New York City Ballet when the musical was being developed.

“The muscles you need to sing are tight when you are dancing. In singing they must be released. It is like two different body types in one. I had to learn to change at the drop of a hat.

“There are times in the show where you are dancing and you have 5,6,7,8 then you have to sing. It is like having a multiple personality disorder and you have to go into a completely different zone.” What are the muscles you use differently as a ballet dancer? I asked.

“It is your lower abdomen that comes into play as a dancer, to keep your frame long. In order to sing, the lower abs have to be released so that your diaphragm can move freely.”

So, you can’t sing and do extreme ballet at the same time?

“It is really complicated. It took a lot of understanding and figuring it out to make that happen. It’s about learning techniques and ways to release those muscles as fast as you can and relax the core to get the air flowing.”

So, do you have to break rules? I asked.

“A little bit. You have to make it work.”

Robert had a long period to rehearse the musical before it opened on Broadway, whereas he had just three weeks to prepare with the Australian Ballet. Ballet dancers are not always good singers, but Fairchild, luckily, had spent some time on his voice.

“When I was younger, I wanted to be a song and dance man. I went to singing lessons and sang in the school choir, but never took it as seriously as my dancing.

“I could carry a tune, so when (the director) Christopher Wheeldon asked if I could sing, I said, ‘Yes, but it depends on who is listening.’ I felt comfortable singing, but in a Broadway show, with 2000 people eight times a week, that is a different kind of sing.”

How rigorous is the dancing compared to the New York City Ballet? How big a workout is it?

“We do a full-on ballet at the end of each show. It is the American in Paris ballet. It is a lot of dancing. On Broadway, to get through a week’s worth of shows, I’d stand in an ice bucket up to my mid-thigh.

“The toll on my legs was just so crazy and they were so exhausted. If I did not do that my legs felt like sausages. (The ice) cuts down inflammation and gets new blood in there, so that anything which had gone awry could fix itself.”

Would dancers normally dance that often with the New York City Ballet?

“No. If you were doing a full-length evening performance, like Swan Lake or Sleeping Beauty, you would have two a week max, so this was next level exhaustion.” In Australia, he explains, “I am doing six shows a week - one a day (Cameron Holmes is his alternate). That is what I ended up doing on Broadway. After three months of eight a week I was a vegetable of a human. As soon as I got that one show off, I felt like a human being again.”

For people don’t know much about the musical. It is based on the movie but given extra value.

“What we are able to do, telling the story now, is to turn up the heat about what it was like to be in Paris after it was liberated from the Nazis. These themes were hinted at in the movie, but it was very discrete. The lead character is a Jewish girl and we talk about this theme much more, which adds to the drama.”

How close, musically, is it to the movie?

“It has a lot of the songs you know and love from the movie – ‘I’ve Got Rhythm’ , ‘‘S Wonderful’ and a couple of others. I think Gershwin’s orchestral numbers are my favourites, particularly before the prologue.”

Visually the production is filled with projections that range from black and white sketches of post-war Paris to extravagant song and dance spectacles.

“Rob Crowley did such a good job with the set and projections, and of course the choreography – everything dances.”

Robert Fairchild comes back to the role after playing the leading man in the West End in 2017.

“I’ve got a lot of pent-up performance needs.” During the pandemic, like many actors, he was out of work and forced to looked for a new job. As Fairchild is a ballet dancer his pivot (or is that pirouette) to a new career was stylish.

“I started a flower company in New York City. The stages were closed, and theatres were dark, but I still felt the need to perform in some in capacity.

“I was shocked at how similar flower arranging is to performing. You create in a studio then bring it to an audience. It filled that void during lockdown. It started with a bunch of Broadway performers who were in between jobs, branded as Broadway florists.”

With nothing else to do Fairchild took part in the distribution side of the business.

“In the beginning it was me and the car. There is nothing for me to do so to let me get out of the house I would go deliver these.”

Was he invited up for cup of tea?

“I was wearing a mask. We were barely seeing each other. I don’t deliver anymore.”

Since then, his enterprise has grown and is delivering bouquets to lots of Broadway opening nights. When I spoke to Robert, he had just ordered a flower arrangement from a florist in Melbourne and he was looking forward to being released from quarantine to check out the city’s flower market.

Robert Fairchild’s mantra is that everyone should try to be unique. Raised in conservative Utah, he said it was not easy being a male ballet dancer.

“Stereotypes are brutal as a kid, especially in a place called Utah where everyone plays sport. I broke the mould. It came with challenges.

“When I was bitten by the dance bug I had to do it. No amount of teasing and bullying could prevent me from doing it. It brought me closer to dance because this is who I am and it was empowering.”

Did it turn people around when they saw the skill needed and athleticism?

“Yes, especially now. I get messages from people from school, who were such buttheads when we were growing up, saying such nice things. When you are a kid you just want to fit in and when you are an adult you want to be unique. I find that fascinating.  Why can’t you be your own unique self from the get-go?”

Is An American in Paris a career highlight?

“For sure. It encapsulates all I love and train for. I will never do a show that is as physically demanding - which stretches me as much as an artist to sing and dance at the same time.”

What sort of warm up do you need?

“A ballet barre at the beginning to get your body warmed up, then vocal. On a two-show day my body is already tight and activated, so to sing I just have to stretch. If you warm up the same way you did for the morning you are screwed because there is no flow - no room for ribs to expand and breath to enter to sing properly.”

What happens on days when you feel tired and are not up to it?

“The moment I hear that music, it is everything. Sometimes you are so dead tired, so you go, ‘let’s go, we’ve got a story to tell’. “

The Melbourne of An American in Paris opened on 18 March at Arts Centre Melbourne, with a Sydney season to follow at the Theatre Royal from 29 April.

Seasons in Adelaide and Perth were postponed due to COVID-19 and will be re-scheduled.