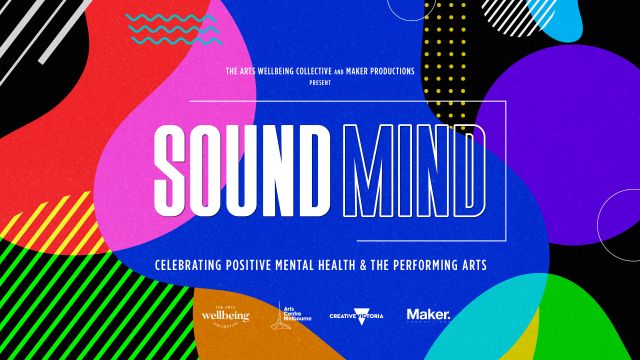 The COVID-19 pandemic has profoundly impacted the Australian live entertainment industry, leaving thousands of gig-to-gig onstage and offstage professionals with unlimited unemployment. The crisis has not only been - and continues to - be financially crippling, but has also affected mental health.

Prior to the pandemic, the prevalence of mental health problems across the Australian entertainment industry was already concerning, with those surveyed showing that symptoms of moderate to severe anxiety were ten times higher than in the general population, symptoms of moderate to severe depression were five times higher, and suicide attempts more than double that of the general population.

Each episode showcases a unique performance by a collaboration of performing artists who’ve come together especially for this series. Artists, who include stage and screen stars Nancye Hayes, Casey Donovan, Alinta Chidzey and Ben Mingay, dancers Adam Bull and Deborah Brown and choreographer Alice Topp, are interviewed regarding their insights into mental health and the performing arts, as well as performing for the series.

Each artist reveals difficulties they face with creativity and collaboration during this time and how they find a sense of meaning, purpose and positivity. Each episode also shares vital tips to help promote positive mental health, and highlights pathways to mental health resources. By relating each discussion to a piece of music, viewers also experience the value of music as an essential healing, learning and uplifting mental health tool in itself - not just for those working in the arts and entertainment, but for everyone.

Produced by The Arts Wellbeing Collective and Maker Productions, SOUND MIND will provide a strong sense of community and a resounding message of hope, encouragement and empowerment during this time of immense difficulty.

“When COVID-19 first hit and the live performing arts industry was shut down, and we weren’t given support by the Government, I was concerned about where the collective mental health of our industry was heading. So, I wanted to create something that had the potential to bring people together to work creatively and to also open up and share some of our mental health stories,” said producer Alex Rathgeber of Maker Productions. “The fact that we have this incredible collection of performers and hosts who’ve been so willing to get involved with SOUND MIND says so much about the need to address mental health across the performing arts and entertainment industry at the moment. A lot of the population are really struggling and turning to entertainment on screen and online to keep them inspired, motivated, distracted or from losing the plot! It’s so important that the people who make this entertainment are thought about in the process of the consumption of it all. Working in any area of the performing arts takes guts at the best time of times, let alone at a time as challenging as this year has been. I want to help make sure our industry can push through this time with enough in the tank to keep working on creating the next special live performance that’ll bring everyone together, and the one after that, and so on. The idea with SOUND MIND is that it’s a creative approach to starting mental health conversations, exploring ways of finding connection and a stronger sense of community in this time, and celebrating the immeasurable value of the performing arts in all of our lives, especially right now.”

Arts Centre Melbourne CEO, Claire Spencer AM, shared, “We are thrilled to be a part of the inaugural series of SOUND MIND. When we launched the Arts Wellbeing Collective Pilot Program in February 2017, we had no idea that this program would become more and more relevant as our industry faces challenges, disruption, and change on such an astounding level.

“SOUND MIND is a joyous celebration of the power of storytelling and live performance to connect, empower, and inspire us. The stories, insights and experiences shared by every collaborator are reminders of the resilience, capability and adaptability of this sector. It was a privilege to work with so many incredible performing arts workers in creating this unique and very special series. We are honoured to support it.”

SOUND MIND episodes will be published on The Arts Wellbeing Collective website and Arts Centre Melbourne’s Youtube page and on the SOUND MIND Facebook page leading up to World Mental Health Day on 10 October 2020.

The Arts Wellbeing Collective is an Arts Centre Melbourne initiative that promotes positive mental health and wellbeing in the performing arts industry.

In 2016, research highlighted startling statistics regarding the mental health and wellbeing of people who work in live performance. In response, Arts Centre Melbourne launched the Arts Wellbeing Collective, a health promotion and prevention program specifically tailored for the performing arts industry.

Consisting of a community of practice of hundreds of arts and cultural organisations who work together, the Arts Wellbeing Collective is an ambitious reform agenda that seeks to create positive transformative change in approaches, attitudes and management of mental health and wellbeing across the performing arts industry.

Since the Pilot Program in 2017, the Arts Wellbeing Collective has grown rapidly to be a comprehensive, sector-wide initiative – the only one of its kind anywhere in the world. Its objectives are:

·        Support and promote positive mental health and wellbeing for all performing arts practitioners.

·        Co-design targeted preventative initiatives that enable everyone to do their best work.

·        Celebrate our shared engagement with the performing arts.

·        Empower everyone to operate with high levels of psychological safety.

We see a future where the performing arts and its people flourish. For more information, visitartswellbeingcollective.com.au

Alex Rathgeber stepped into a principal role on London’s West End aged 24, appearing as Raoul in The Phantom of the Opera. He has since appeared in numerous acclaimed Australian productions, including The Boy From Oz, Ghost, The Wizard of Oz, The Drowsy Chaperone, The Rocky Horror Show, An Officer And A Gentleman and Anything Goes, for which he earned a coveted Helpmann Award.

In early May, in light of the current health crisis and the extraordinary work being done by our healthcare workforce, Alex conceived and co-produced Heart Sounds - a celebration of nurses, midwives and the wider healthcare workforce on International Nurses Day. Presented in partnership with Oriel Entertainment, Heart Sounds showcases the talents of an incredible line-up of Australian performers including Virginia Gay, David Campbell, Eddie Perfect, Rebecca Gibney, Zahra Newman, Joel Jackson, Lucy Durack, Bert LaBonte, Jemma Rix and more.