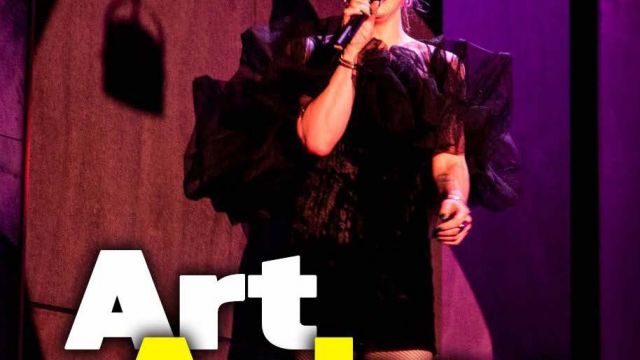 Since mid-March COVID-19 has been a wrecking ball on the seasons of Australian theatre companies. Some productions squeaked in before the curtains came down, others were cancelled mid-season or just before opening night.  Stage Whispers reviewer Michael Brindley has been sifting through the debris.

In cities and country towns across Australia, theatres are dark, shuttered, empty and echoing with the scheduled shows that were to have been. Performances and tours are cancelled for the foreseeable future, leaving theatre-makers bereft – and not just of income, parlous though that is. They are bereft of an essential element of their arts and crafts: an audience.

About a week after COVID-19 restrictions bit, a lone member of Melbourne’s Red Stitch company was rummaging through stuff stored in the company’s second venue, a vast, now still, silent, cavernous space in Prahran. Unexpectedly, she came upon the little model for the set of what was to be Red Stitch’s next production, Orlando. It was (it is) exquisite. (The designer is Jonathan Hindmarsh.) It made the actor catch her breath with an almost overwhelming sadness. Reverently, she photographed the model and sent the picture around to all her Red Stitch colleagues. There were some tears: it was the image in miniature of what would be unrealised and unfulfilled.

(We can’t show this picture of the Orlando set because Red Stitch doesn’t want anyone outside the company to see it: one day they ‘might get the show up and showing the pic now puts a curse on it and spoils the surprise…’)

But it’s another, maybe worse heartbreak to build the set – and then to tear it down before opening night.

Queensland Theatre Company was confident of a hit with Triple X – a co-production with the Sydney Theatre Company. On March 14 QTC announced on Facebook: ‘We're so excited to finally be able to share this hot new work with you. Our incredible cast, crew and creatives have worked so incredibly hard to bring this story to life. We're sure you'll smash it.’

The company managed to get a few preview performances to the stage but had to cancel before opening night.  Photos of the production – that hardly anyone saw - were published ironically on their Facebook page on World Theatre Day (image above by Brett Boardman).

Sydney’s Darlinghurst Theatre Company was wildly excited about their season of A Chorus Line.  Like Triple X, it was called off just before opening night.

They wrote on their page: ‘We are immensely proud of our A Chorus Line company. They have poured their blood, sweat and tears into this fantastic show. Anyone lucky enough to have experienced one of our preview performances knows that this special production deserves to have its time in the spotlight.’ ‘At the very moment when we would have been transferring to the stage on Sydney Harbour, we made the decision to cancel the season,’wrote Artistic Director Lyndon Terracini.  ‘It is heartbreaking for everyone involved.  So much work and not even one performance… Then there are all the suppliers, the contractors working on Handa Opera on Sydney Harbour… The silence is punctuated by drills unscrewing the village as they dismantle the entire structure. This is the saddest sound of all.’ (Image left: Fireworks at West Side Story - 2019. Photographer: Hamilton Lund.)

Sydney Theatre Company’s four theatres are all dark. Torch the Place, already on the boards, was stopped in its tracks. No Pay! No Way!: cancelled mid-run. Triple X was due to open 30 April. It won’t now.  Emerald City, ready to go, cancelled, along with Berlin, SLAP. BANG. KISS. andSexual Misconduct of the Middle Classes – and the list goes on.

The original stage musical version of The Sapphires was on an all-states tour, five shows into a scheduled one hundred and fifty, suddenly stopped. Cast member Brittanie Shipway emphasised to me the particular heartbreak for the indigenous cast since the plan was to take this positive, affirmative show to remote communities – but those communities are among the most vulnerable to the virus.

Rolling Thunder Vietnam – an independent, privately financed show, got off to a mighty and rave-reviewed start in Geelong, the planned beginning of a national tour, sell-out audiences virtually assured - only to be stopped. Producer Rebecca Blake says they’ll reschedule.  Of course they will. In West Australia, Black Swan’s co-pro with Melbourne’s Malthouse, Cloudstreet (image on right), just made it, finishing its run days before the restrictions hit. Their next show, an adaptation of The Cherry Orchard, is now ‘in rehearsal’ via Zoom, but there’ll be nothing live on stage there until Oklahoma! – in November – if that.

The sprawling Adelaide Fringe Festival (800,000 tickets sold) just made it too, wrapping on 14 March – but what next for the hundreds of performers who rely on travelling one festival to the next?  Melbourne Fringe: postponed. Melbourne International Comedy Festival: cancelled.

And Melbourne Theatre Company cancels six shows – shows to which their subscribers have already bought tickets and some of whom are now seeking refunds. Malthouse asks their subscribers to donate their tickets and ‘feel good’, as they cancel Grey Arias, Macbeth and K-Box. Will the next three shows scheduled after that disappear forever?

And of course, let’s remember that a theatre show is more than the visible cast on stage; theatre is made by many artists – as Lyndon Terracini noted and as is acknowledged on the Sydney Theatre Company website by Artistic Director Kip Williams. He refers not just to actors but to the directors, designers, musicians and prop makers. The audience is those people’s raison d’être and the test of all their work – even when the audience takes for granted the director’s work, and doesn’t consciously notice the ways that the costumes, the lights, and the music enhance the characters and story on stage. Every one of these contributors and collaborators needs an audience too, to see and respond to their work.

Imagine the thought, the imagination, the planning, the problem solving, the concentrated creativity all building toward the event you’re sure will happen – and then… Creative people are used to rejection (they have to be), but this is something else.

There is a visceral need for live performers to perform live to a live audience. As Mitchell Butel, Artistic Director of the State Theatre Company of South Australia says on the company’s website, ‘It’s hard to perform theatre when there’s no one in the seats… The theatre only works when audiences and artists gather together.’ Mr Butel is touchingly upbeat in this blog, but there’s no escaping the sadness underneath.

So, what to do? All these companies – and the others I’ve not the space or the morale to mention  – have the problem of maintaining their optimism and if possible, the income of all these people, and on the other hand, maintaining contact and engagement with their audiences.

Black Swan is blessed in being fortunately able to honour all their contracts for the rest of the year. Too bad for other WA companies like Barking Gecko or Blue Room who got no Australia Council funding. Companies that have the resources to do so are maintaining contact by ‘going online’ to bring ‘the joy of theatre’ to their audiences in new ways.

Others theatre makers with no resources except grit and a camera are going online too – or are being urged to do so. Sure, it’s a form that can be fun and interesting and it keeps them visible, keeps them communicating, but I doubt if any of them would claim that ‘online’ even comes near to performing for live humans in a shared physical space.

Indeed, some people are decidedly dubious about the online thing. Kimberly Twiner, a director at PO PO MO CO, an independent, LGBTIQ outfit, specialising in clowning, satire and physical comedy, writes, that live performance is ‘grounded in connection between humans… [it] can only be caught in the pace of the breath, the pit of the stomach, the melting of the heart, the twitch of irritation, the widened eyes, the upturned edges of the mouth – the wildness of the feeling body.’

At the other end of the scale from the big funded or ‘name’ companies, there are the little outfits that are a bit hit and miss but so often surprise and delight us in ways the more risk averse would not dare. Take The Wolves. It’s a company that’s only an unstoppable, incorrigible writer, Michael Gray Griffith and his actor partner and co-producer Rohana Hayes – no spring chickens either of them. Gray Griffith, sometime tram driver, spent years trying to ‘break in’. He had a good intimate three-hander at La Mama and a powerful two-hander at Northcote – both almost unnoticed and unreviewed. Then Chris Mead at the MTC liked a play called Marooned, about suicide, with a cast of four, liked it enough to arrange for The Wolves to mount a very no-frills production at the Lawler, the smaller space at the MTC’s Southbank. It was rough and raw, but it touched a nerve. Word of mouth meant full houses. The play is about a real problem and soon country towns were booking the show in, all expenses paid. Then ‘the suicide play’ (which is black but funny) became pub theatre too – and successful.

The strategy was ‘take drama to the suburbs’. For the first time, Gray Griffith and Hayes were paying their actors and themselves. There were more country towns asking for Marooned and it was all set to tour. The Australian Defence Force heard about Marooned and offered The Wolves an all-expenses paid tour of army bases across Australia with a kick-off at Duntroon… Then COVID-19 struck. Gray Griffith told me, ‘It felt like we reached the top of Everest only to find there was like one of those water slides on the other side…’  (Ballarat has offered $10,000 for The Wolves to mount Marooned there, ‘when all this is over’.)

But surely, with this lockdown shutout, we, the audience, are deprived too.  We are deprived of the whole ritual or ceremony of simply going out to a communal space (maybe dressing up a little, maybe noticing how others have?), to gathering there, ticket in hand, with a sense of excited anticipation, and then, in the hush, the show begins, the lights reveal a space with live bodies in it, moving, speaking, courageously risking exposure to make us gasp, or think, or laugh, or cry. To quote Kimberly Twiner again, ‘The audience becomes active in the practice of feeling… they become the comedian, the dancer, the guitarist.’ When it works, when it all comes together, there is nothing like it. Really great theatre that makes us forget even where we are, and even if that is rare, it beats the movies any time. It’s not just all about money: it’s the absence too of something vital and important.