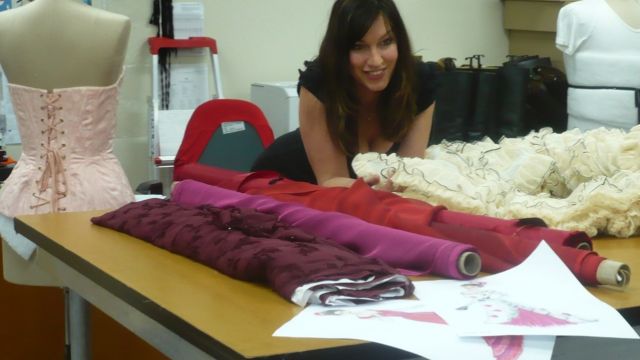 When Antoinette Halloran sweeps onto the Queensland Conservatorium Theatre stage as Hanna Glawari in Franz Lehar’s immortal The Merry Widow she’ll finally be graduating, as she puts it, “from little girls to women.”
Up until now her impressive career has seen her play all of the young girl roles: Adine in The Elixir of Love, Pamina in The Magic Flute, Josephine in H.M.S. Pinafore and Gianetta in The Gondoliers amongst others.
With The Merry Widow her career has come full circle. One of her first shows after graduating at the VCA and the University of Melbourne with an honors degree was to play the role of Madame Olga in a production of the Widow that starred Marina Prior. It toured Australia, but Antoinette never made it to Brisbane.
Not only will this be her Opera Queensland debut, but also her first show in Brisbane. Antoinette said, “it’s a very special experience” and she feels “blessed to get the role.”
Currently she is playing Rosalinda in Johan Strauss’s Die Fledermaus for Opera Australia. To be playing the lead in two of the most famous Viennese operettas in the one year is a “dream come true” for her.
When I asked her about the enduring popularity of operetta she said that with the world situation the way it is, there will always be a place for light-music entertainment for audiences to escape. She believes the sell-out concerts of Andre Rieu, which are full of operetta music, proves it.
Peter Pinne

The Merry Widow plays July 10 to 31 at Conservatorium Theatre, South Bank, before embarking on a Queensland tour in August with performances on the Gold Coast, and at Toowoomba, Maryborough, Gladston, Rockhampton, Mackay and Townsville.

Image: Antoinette Halloran in the Wardrobe Department at Opera Queensland