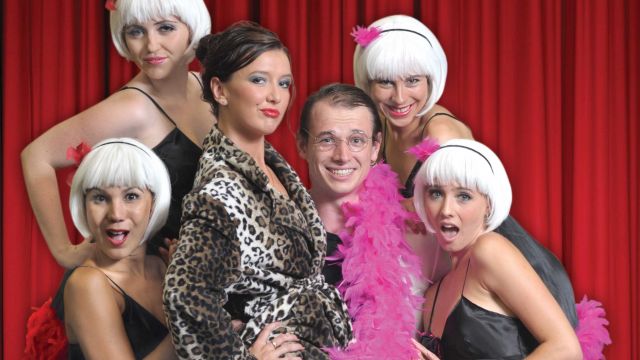 David Spicer reports on a barrel of full on and off stage drama.

The Mosman Musical Society (est. 1903) on Sydney’s North Shore has a long and proud history of staging traditional music theatre and operetta. Its first fully staged production was The Mikado in 1904. For many years it staged up to three shows a year, which were so successful they transferred to the city for short runs.
It was where a young Reg Livermore cut his teeth. In his biography he marvelled at the talent on display.
But after the glory days the company went into decline in the later part of the 20th century. The local council tore down the Town Hall and didn’t replace it.
There were also some ‘characters’ on the committee. For a while the treasurer was John Wayne Glover. He became one of Australia’s most notorious serial killers and made world headlines as The Granny Killer.
From March a new chapter in the Mosman Musical Society’s colourful history will be written with the staging of a world premiere of an original musical.
Called Bringing Down the House, it’s written by locals Jim Coyle and Roger Saunders. They describe it as a brand-new, old-fashioned musical that follows the lives and loves of a theatre company as they fight the bank, their feelings and each other to ensure that the show goes on.
The show has original songs that pay tribute in style to the golden age of Broadway and will feature an eleven-piece swing band.
Jim Coyle says the story will especially appeal to those involved in theatre.
“There are two leading ladies who are rivals and a writer who falls in love with the leading man. There is a romantic sub-plot with a twist,” he said.
The theatre company is going broke and has to raise money to stay open, but the problem is that the bank intends to foreclose on opening night.
“They try everything to raise money, from chocolate drives, to sausage sizzles to a karaoke night. Then the secretary (without committee approval) puts their money on a horse,” he said.
Getting the theatre to stage a world premiere was no sweat for Jim Coyle – who also acts as the Musical Director.
“Most of the committee came over for a sing through and as soon as they heard it they were all for it,” he said.
Casting was also no drama.
“It’s harder to cast a completely original musical than say Fiddler on the Roof, but we now have a good mix of new and old faces. We had the usual problems of finding enough men – but no more than normal,” he said.
Mosman Musical Society President Jody Rose added, “This is a thoroughly entertaining show with some great songs and dance routines and a lot of laughs. I know there are many people who are really looking forward to this world premiere.”

Bringing the House Down played at the Zenith Theatre, Chatswood from March 31 to April 3, 2010.

Originally published in the March / April edition of Stage Whispers.