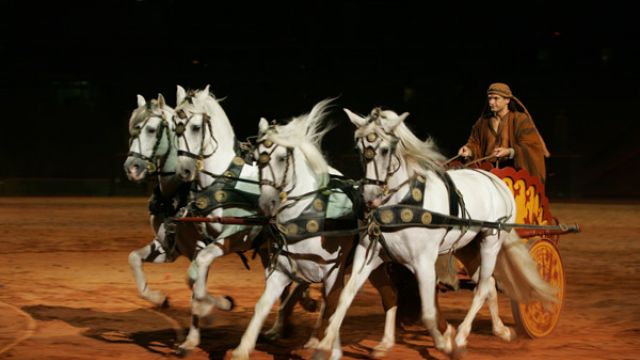 Ben Hur – The Stadium Spectacular, beginning a world tour, will perform exclusively at Sydney’s ANZ Stadium for two nights only on Friday 22 and Saturday 23 October.

This is a Sydney exclusive performance. There will be no other performances in Australasia.

This in-the-round performance, featuring a live 20-minute chariot race with 32 horses, a giant Roman Galleon, and a parade of Roman Legionaires, will transform Sydney’s Olympic Stadium into a vast Roman Amphitheatre.

The spectacular production will include eleven separate pageants according to Executive Producer Andrew Guild. More than 250 lorry loads of crushed gravel will cover the turf which just weeks earlier hosted for the ARL Grand Final.

The 15,000 square metre stage space is greater than the combined stage area of other Sydney main-stage spaces including the Opera Theatre, the Capitol and the Lyric combined, according to Guild.

Audience participation will be encouraged during the spectacular’s 20-minute chariot race and gladiator fight. There will be a coloured scarf on every seat in the stadium, half red and half yellow, with audience members encouraged to wave them and cheer on the goodies and the baddies respectively.

Shooting stretched over 35 heavily edited days for the movie’s spectacular chariot race. The live version will be absolutely live. Training, we are assured, is under RSPCA supervision. The Australian six-horse teams for the chariot race are currently being prepared in Queensland by the same trainers who provided the horses for the Olympic Opening Ceremony at the same venue 10 years ago.

While 70 of the of the performers will come from France, 184 Australian actors, 32 Aussie horses, and a local crew will be employed.

Ben Hur - The Stadium Spectacular was first performed in 2006 at the Stade de France, Paris where it played to over 300,000 people.