Bittersweet: The Rise of the Australian Musical 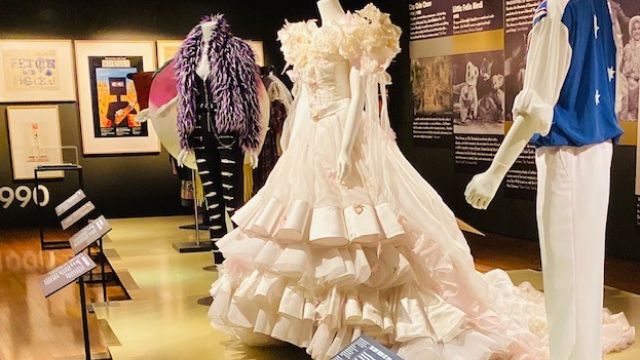 Bittersweet, the exhibition of iconic stage costumes and memorabilia from some of Australia’s best-loved musicals, has extended at QPAC’s Tony Gould Gallery for an extra month. This is great news for musical theatre fans visiting Brisbane’s South Bank – especially, as the exhibition reveals, Queensland has the highest musical theatre attendance per capita in Australia. Luckily, we also have a resource dedicated to preserving our theatrical history with the QPAC Museum collection – more than 80,000 artefacts, including costumes, designs, programs and other precious items.

This is a chance to get up close to the wonderful work in costumes from the very latest smash hit, Muriel’s Wedding to frocks from Ladies in Black, and what could be the jewel in the crown – the intricately embroidered silk dragon robe and skirt from Chu Chin Chow by Oscar Asche – the longest-running musical on London’s West End stage (more than 2,200 performances between 1916–1921).This precious costume was donated to QPAC Museum in 1989. It had been in the donor’s family since 1923, gifted by Asche at the end of the musical’s Australian tours. It is doubtful that this extraordinary piece will be seen on display again soon.

QPAC Exhibitions Manager, Maria Cleary, curated Bittersweet having been inspired by QPAC’s recent involvement in the publication of The Australian Musical: From the Beginning by Peter Pinne and Peter Wyllie Johnston – the definitive resource about Australian musical theatre. Bittersweet is a tribute to all the practitioners involved in every production, the exhibition’s title reflecting the book’s many stories of artistic and financial efforts and the struggles to see shows through to production – sometimes only to be rewarded with a short stage run. As in the book, this exhibition reveals the stories between the lines and behind the scenes. The collection spans Australia’s first musical – The Bunyip – to our very latest smash hit, Muriel’s Wedding. After that show’s successful run in Brisbane, Maria knew that the costumes would be in storage until the next production. She approached the costume team and secured the loan of Muriel’s splendid wedding dress for the exhibition. 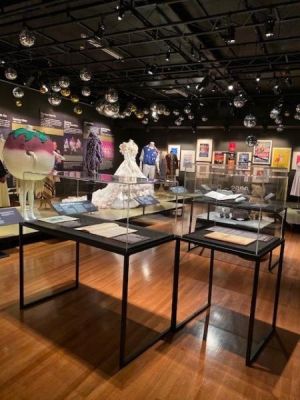 Maria explained that costumes can be the most difficult to procure for the permanent collection: many are in constant use – or departments working on a budget tend to recycle individual pieces, repurposing them to suit another script – or sometimes items are sold or donated to amateur or school theatre groups. Maria has also found some iconic artwork and print materials. She managed to track down Reg Livermore’s phone number, and a call to the Aussie stage star resulted in posters for his musicals Ned Kelly (1977) and Big Sister (1990), being donated from his personal collection.

What also emerged from The Australian Musical is that Aussie musical theatre was innovative from the get-go: women contributed their creativity from the earliest date; indigenous themes featured almost immediately in the search for unique Australian stories; and gay culture and social issues were also showcased – for example, in Alex Harding’s Only Heaven Knows, one of the first musicals to deal with gay themes. Some may be surprised to discover that Adelaide was the city where much of our first musical theatre history emerged, and Bittersweet has some unique items on loan from the Adelaide Festival Centre. All these stories are featured in Bittersweet.

Find out more about Bittersweet: qpac.com.au/event/bittersweet_19/

The Australian Musical: From the Beginning by Peter Pinne and Peter Wyllie Johnston is published by Allen & Unwin in association with QPAC and can be ordered here: stagewhispers.com.au/node/28144