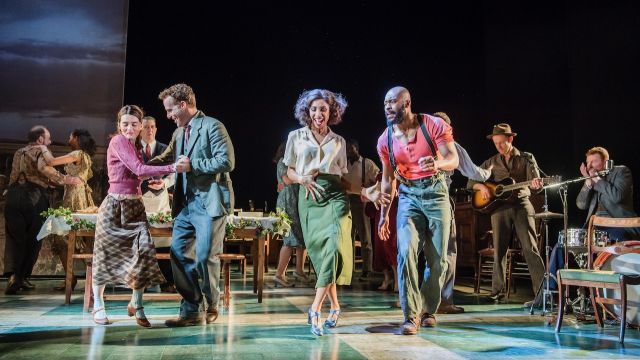 West End and Broadway musical Girl from the North Country, written and directed by Conor McPherson and with music and lyrics by Bob Dylan, is the first new international production to be announced for Australia since the NSW Government announced the return of live theatre to the state.

Since opening at The Old Vic in London, Girl From The North Country has played sold out seasons in the West End, Toronto and Broadway.

A story of American life in 1934 Minnesota, it centres on a community living on a knife-edge in the local guesthouse: the owner, Nick, owes more money than he can ever repay, his wife Elizabeth’s mind is slowly deteriorating, and their daughter Marianne is carrying a child no-one will account for. And, when a preacher selling bibles, and a boxer looking for a comeback turn up in the middle of the night, things start to spiral beyond the point of no return.

Featuring the songs of Bob Dylan. reimagined, including “Hurricane”, “I Want You”, “Slow Train Coming”, “Lay Lady Lay” and “Like A Rolling Stone”, Girl From The Country stars Lisa McCune (King And I, South Pacific), Zahra Newman (The Book of Mormon, Wentworth), Terence Crawford (Escape from Pretoria, 1984), Helen Dallimore (Wicked [London], Legally Blonde) and Peter Carroll. Further cast will be announced at a later date.

Written and directed by multi award-winner Conor McPherson (The Weir, The Seafarer), Girl From The North Country opens in January at the newly refurbished Theatre Royal Sydney as part of the 2022 Sydney Festival, ahead of seasons in Adelaide and Melbourne.

Director Conor McPherson said: “It is an honour to bring this production I'm so proud of to Australia as part of the Sydney Festival in January next year. Our journey from The Old Vic in London to the West End in London and onto Broadway has been monumental, and now as part of the reopening in Sydney of the Theatre Royal. We have managed to find an incredible Australian cast and we can't wait to bring this magical production to life.” Co-Producer Richelle Brookman for GWB Entertainment said: “We fell in love with Girl from the North Country after experiencing the show in New York at the Public Theater. This is most definitely not a jukebox musical. Celebrated playwright and director, Conor McPherson has created a perfect fusion of emotive, dramatic theatre with twenty songs by the iconic Bob Dylan, weaving through and enriching the storyline about those we love and hold dear, our hopes and sense of place and purpose. All things that have heightened importance at this time.”

Co-Producer Damien Hewitt said: “Sitting in a packed theatre in London’s West End, we knew Australian audiences had to see this magnificent musical. We are now thrilled to present this new production with an all-Australian company, as part of this year’s Sydney Festival at the newly restored Theatre Royal Sydney this January”.

Lisa McCune said: “Every now and then a show or character has a profound effect on you...Girl from the North Country and Elizabeth Laine were that for me, and I am thrilled to be to be part of an incredible ensemble cast for the Australian Premiere at the newly renovated Theatre Royal Sydney.

“With music and lyrics by the legendary Bob Dylan, set to a beautiful book written by Conor McPherson, I know audiences will share in a memorable theatrical experience.” “And with fifty percent of the Girl From the North Country cast and crew hailing from Sydney, we are so pleased that this production, and the festival, will be playing an important role in aiding the city's recovery, employing NSW artists and crew whilst supporting our local live entertainment communities. I cannot wait to unveil the full Sydney Festival program in November and restore culture to the city this January.”

Girl From The North Country opens this January at the newly restored Theatre Royal Sydney as part of 2022 Sydney Festival.

All performances will have conditions of entry adhering to the relevant NSW Government Public Health Orders and health advice.

Tickets are now on sale at: northcountry.com.au