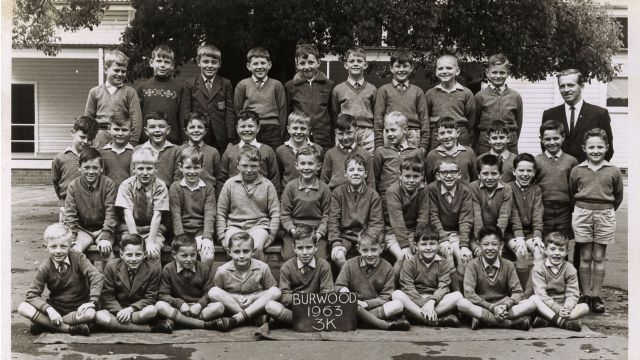 Stage Whispers’ Editor has the inside story on Angus Young, lead guitarist with AC/DC. In this WORLD exclusive he reveals what the rock star was like when he was obliged to wear a school uniform

When David Spicer told me he was at the AC/DC media conference, I casually mentioned that I had gone to school with Angus Young – a prolonged brush with fame through primary and secondary school.
The primary school was Burwood Public, in Sydney’s inner-west. Pictured above is the class. of 1963. Which one is Angus and which one is me you ask? Well have a go guessing yourself.
I was neither especially close nor especially distant from Angus Young. He could big note himself that his older brother George Young was huge star with the rock band The Easybeats.
Angus was from a family of Scottish immigrants who settled in Sydney.
We used to head off in the same direction after school. Angus was a leader of the group that would smoke under a railway bridge. Yes, smoking in primary school - how shocking - thankfully, an example that didn’t brush off on me.
I think it was our 3rd class primary school teacher, Mr Keever, who directed the only school operetta that was staged at the primary school. It was called Little Gipsy Gay. My mother played the piano, and I was in the show. I can’t recall, though, whether Angus was in the cast. I have the feeling it wasn’t his style.
We both then graduated to Ashfield Boys High School, a school that cannot claim much credit in helping Angus Young develop his music skills. The Music Department boasted a set of recorders and some brass instruments that were hardly ever touched.
I recall just one dance with a rock band. I’m pretty certain that they were an early incarnation of Dragon. During the performance, the Principal charged down the length of the hall, pulled the plug on the band, and the lights came up.
He screamed at one of the boys, “Get your hands off that girl! Her parents sent her here thinking she was safe.”
So it was hardly a nurturing environment for a future rock superstar.
When Angus Young finally appeared on stage in an Ashfield Boys High School uniform, the parent body was not impressed.
I doubt that he was ever invited back to talk at a school speech night, although I would love hear if I am wrong.
More than 45 years after that Year 3 photo, what a difference. AC/DC is one the most successful rock bands of all time. They sold 530,000 tickets in five hours in Australia.
David Spicer told me that at their only media conference they were ushered in and out in five minutes for the briefest of photo opportunities.
They didn’t want to hold a media conference, and indeed they didn’t need to.

Which one is Angus? Have a look, then check our Facebook page for the answer - www.facebook.com/stagewhispers