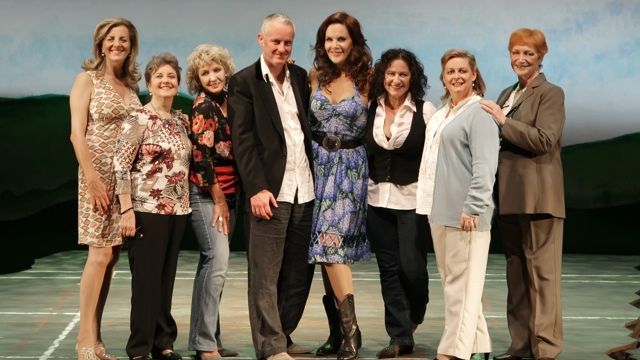 The stage comedy Calendar Girls is adapted from your own film, based on a true story. How did the film come about?

“The film itself was really inspired by a group of women in the W.I. (Women’s Institute, somewhat similar to Australia’s CWA). It’s a very decorous group – the pre-conceived idea will be that they do a lot of jam making, knitting and home-crafts – very respectable.

“The husband of one woman, in a branch in the rural county of Yorkshire, very near to where I live, died very unexpectedly of Leukemia. After the grief had been dealt with, one of her friends came up with this idea of doing a charity calendar to raise money for Leukemia research, in which they would pose, very decorously, nude.

“At that stage, the idea of posing for a calendar was very new. Practically everybody has their own nude calendar now, but at that time it was very much the first of its kind.

“It was just such an extraordinarily witty thing to do, because these women, you got the feeling, would sleep in their clothes rather than ever take them off. The photographs were incredibly beautiful. The husband of one of the women who featured in the calendar was a major photographer, so the photos themselves are small works of art, beautifully shot.

“So the whole thing had this air of graceful naughtiness, of decorous irreverence, and they set this extraordinary ball rolling.

“When it hit the press - when the calendar came out - Suzanne Mackie, a film producer in England, saw it and immediately thought there might be an idea in there. After about a year of trying to get the script to work she came to me.

“The bizarre thing is that I had bought exactly one of those calendars, from one of the women as it turns out, at a summer fete, whilst I was on holiday. We used to go there on holiday every year. I sat looking at it for a year, never ever thinking it would be a good idea for a play. It had been staring me, quite literally, in the face for a year, while I calmly marked all my dental appointments on it.”

What did you see which would allow the idea to work as a film, which hadn’t been apparent before?

“At the time it was a funny idea that wasn’t a film. What had happened in between the whole thing having been kicked off, and my getting involved, was that the women in the calendar had fallen out. It had sparked this massive disagreement between six of them on one side, and five on the other.

“In a way, the film provided its own third act, because at that stage there wasn’t enough in the story to make it into a film. There wasn’t that final extra limb that you sort of need to start working on something. So I came at a very fortuitous time.”

Calendar Girlsis one of the most successful English films, both at home and overseas. What is the special appeal?

“If you look back at English films that have succeeded internationally, they have in common the fact that they’re regional. They’re not London based films – they’re about towns outside of London. It gives them a sense of community and a different language, which I think people in other parts of the country love.

“Calendar Girls is also about things that are very universal – it’s about love, laughter and loss. It’s about the pain of the loss of a loved one, but then conquering the fear of the disease, and in some ways, striking a blow against the disease, in a very irreverent, very un-English kind of way.

“It’s that cocktail of the naughtiness of the action, and the sense of decorousness so often attributed to the English, and the W.I.

“I think people respond to it because everyone’s been touched by the disease, and everybody would like to give the disease a kick in the crotch. You do this by your laughter at this play.

How did the stage adaptation come about?

“I felt it would be fabulous if the story continued to have a life through theatre, because not only are people being constantly reminded of the story, but also because, particularly in amateur companies, it gave people a chance to be part of the story. It genuinely kept the story physically alive, and also every time it gets performed it raises money for Leukemia research. So far the stage play has earned a quarter of a million pounds for Leukemia research.

“The success of it, when it went into the professional theatre first, actually caught everybody completely off-guard. Nobody has ever seen anything like it. It’s become the fastest selling play in the history of British theatre. So we’re all just working to keep the standard of the play up, through its various casts, to make sure it’s as sharp as it always was.

“The privilege for me as the writer is that I had to go to Disney to get the rights. Disney hold the stage rights to every film that they make. I just said, ‘I don’t want to do this as a musical, I want this to be a stage play,’ because I thought that plays would be easier to stage for the amateur market. I think that’s what swung it. The guy in charge of Disney Theatricals said to my agent, ‘I’ve got five or six groups of people who’ve applied to do this as a musical, but I’ve said no at each stage, but if Tim really wants to have a go at doing it as a stage play I’ll let him have a go.’ So they gave me, personally, the rights.“

Do the same things appeal in both the stage play and the film?

“Partly, but the gift of theatre is that it’s happening in front of you. The live nature, and the bravery of the actresses who have to take their clothes off in front of an audience every night, and be saluted by the response of the audience. It’s so different from taking your clothes off on a film set. The first time it was ever performed I hadn’t realised quite the degree to which the audience suddenly realise, ‘Oh my god, they’re actually going to do it, tonight!’ What those women did in the privacy of their own homes was daring enough. For these actresses to be doing it on stage … now … actresses of the calibre that we’ve got in the Australian production, it’s a very different deal. I think that gives the stage play an extra strength and an extra electricity.”

What have the challenges and the joys been of adapting the film to the stage?

“The challenge is bringing the world to the calendar, rather than taking the calendar out to the world. But to be honest, that’s the joy.

“The play would have failed miserably if it had flagrantly tried to replicate the structure of the movie. You have to almost watch the movie then close your eyes and rewrite it completely for this new media. So there are only four pages of script from the movie in the stage play. The rest is all original.

“The movie follows the story of the two lead characters. In the theatre you get to write a much more corporate piece, and fill out the lives of the other girls who made this extraordinary jump to taking their clothes off for a calendar. There’s many, many scenes of six women talking and interacting rather than just a few characters, so you hopefully get a sense of six complete lives rather than just two.”

Do you see it as an issue that people will come to the stage play with their memories and expectations of the film?

“I think the truth has been that nobody has left the theatre feeling, in a bad way, that they’ve seen another piece of work. They feel that they’ve seen a story they knew, but it’s been told in a different way, and hopefully they’ve laughed more, because the chance of filling out the comedy and the comic persona of the other characters means that you can spend more time laughing.

“My primary aim in this play is that the pain of loss through cancer is beaten back by the amount of laughter, and that people should laugh so much during the evening that they don’t realize that they’re also crying at times.”

The advertising is obviously based on the nudity. If you couldn’t use that angle, how would you go about selling it?

“I don’t know, because there wouldn’t be a play. Of course the play is there because of the nudity, and the clever thing about the advertising here and in London is that the nudity that you see in the advertising is very similar to the nudity in the play. If anything indecorous was ever on show, then the whole thing would fall as flat as a soufflé on which the oven door had been too early opened.”

“The truth is it’s a fan dance. It’s like the Folies Begère, in that it’s very playful and what you can’t show in the poster is the real positive effect of the calendar, which is the growth in beauty in the women who do it. They don’t metamorphose into different people as a result of doing this calendar, but they become brighter, and they flower, in the way that some flowers flower – that sense of women who become more self-confident and more beautiful in spirit because of that. “

Casting your mind over actresses, past and present, who you would choose in a fantasy cast?

Calendar Girls opened in Brisbane in April 2010. It plays the Theatre Royal Sydney until June 13, and opens at the Comedy Theatre Melbourne on June 17.