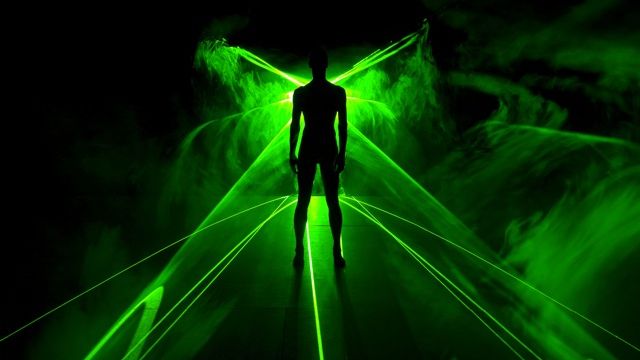 Did you receive a brief for the use of laser lighting in Mortal Engine?
The great thing for me about the development of Mortal Engine was that there was no brief! It really was a case of the creative team being in the same space for a period of time, testing ideas and techniques. Director / Choreographer Gideon Obarzanek, became interested in a collaboration after seeing my DVD 'backscatter,' which is a series of audio-visual films made for the cathode ray oscilloscope. In these the sound and light electricities are the same … what you hear is what you see.
So the real starting point for the collaboration was based on the fusion of light and sound and how we could make that fusion even more inclusive in order to include other aspects of a work like dance, choreography and video. What became apparent was that the laser had the potential to expand the 2 dimensionality of the video aspects of the work and really reach out 3 dimensionally to include the audience.
What are the challenges for you, of the interaction between dancers and this sort of multi-media design?
One of the first concerns was safety. It can be quite dangerous working with laser light. The performers do become quite intimately involved with the laser system and are much closer to it than the audience members.
The second challenge is aesthetic rather than technical. That is, how do you work with the human form and lasers without recreating a bad scene from a mid 1990's rave party? Well, thankfully, Gideon's choreography and the system co-designed by myself and Frieder Weiss, combined to produce something much more beautiful than that. In the end, the solution was to use Frieder’s motion tracking data to essentially 'wrap' the dancers up in the laser light, calibrating the system so that the body contours captured by the infra red system were shot back onto the dancers bodies. The effect is quite mesmerising.
Did you work interactively with the performers and choreographer in order for design and performance to dovetail?
Yes, the process was extremely interactive. The challenge was to work with that pre-existing material and tailor tracking, sound and light situations that would work with or enhance that choreography. Often though, an experiment or a half followed idea would require a completely new approach and many aspects of the show were a direct result of these serendipitous detours or unimagined coalescences.
How did you go about creating the effect in this image?
All of the effects that I create with the laser are generated by audio signal. The whole point of what I do is that what you are seeing and what you are hearing is a manifestation of exactly the same electrical information. So I design sounds that are sent directly from my sound-card (as fluctuating voltage) to some very small, high speed motors that move tiny mirrors and deflect the laser light on an x and y axis. So the sound is rendered directly as movement, shape, and geometry. The effect in this image is affectionately called the butterfly due to the winged nature of its appearance.
In this instance the moving shape is generated by combining eight individual sine tones with various frequency and phase relationships. The smoke you see in the photograph is also an essential aspect of the effect, needed to articulate the laser light. Without smoke the effect is invisible.