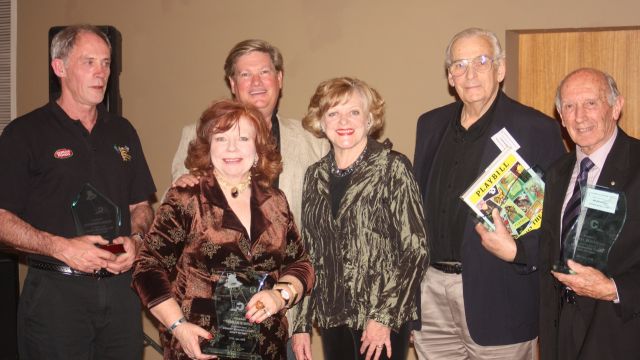 Three men and one woman with a combined involvement of 200 years of outstanding service to community theatre have been honoured at a dinner on July 24, presided over by Music Theatre superstars Nancye Hayes and Simon Gallaher.

A foundation member of Gosford Musical Society in 1947, Kevin Booth has served in every post imaginable, from ensemble singer to stage manager to lighting designer. He first joined the GMS Board in 1954 and was President for 30 years.

Up until 1960 the Society performed in a large picture theatre.

When television was introduced, the company was about to disband until Kevin Booth found another venue, a pavilion at the Gosford Showground, which normally housed chickens. The absence of seating, sound, lighting and even a stage were ‘minor’ obstacles which he somehow rectified.

In the early 1980’s Kevin Booth led the lobbying effort and fund raising for a permanent home for GMS.

By 1982 he managed to acquire the building material for a large rehearsal complex, set building facility and costume storage centre, which currently houses 30,000 costumes.

In the mid 1980’s he helped raise the first half a million dollars to kick start the Laycock Street Bi-Centennial Community Theatre. Mr Booth’s vigorous and dedicated efforts greatly benefited all Central Coast residents, who now enjoy a state of the art theatre.

In its citation the GMS Board stated: “Kevin Booth is a man who never has a bad word for anyone, always thinks the best of his fellow human beings and is the type of role model that everyone would want as a father or grandfather. He has worked tirelessly and unselfishly for his community.”

In 1958 Alan Mundy was among a small group of young people, eager for drama opportunities, who broke away from The Rockdale Musical Society to form The Illawarra Theatre Guild. The company still performs as the Guild Theatre Ltd. in its own Rockdale premises after 58 years.

In 1961 Alan became the Treasurer for The Guild. He has held this position almost continuously until this day. He has also performed in 30 of their plays.

In 1967 a new music theatre company was forming in Miranda.
Alan was invited to direct its first production, The Desert Song. He has been involved in every production, in some way, ever since and chalked up 74 directing credits. His favourites include Little Me, Sugar, My Fair Lady, Pippin, Seesaw, Follies and of course Les Miserables (3 times).

During his prime Alan Mundy was spotted by the JC Williamson Company and received an invitation to turn ‘pro’.

He decided more regular employment was better for his family and instead dedicated his many talents to community theatre.

Peter Fordham has served his community in southern New South Wales with great distinction and passion.

Whether it be the main cultural event in town, a small public school concert or a production of Murder in the Cathedral set in a Cathedral – he is ever available to build a set, stage manage or be part of the crew.

For 20 years he has helped produce theatre restaurant in small towns from Hillston to Lake Cargellico, to drought affected places like Rankin Springs.

He packs the ute and sets the stage and gets on with the show in little halls and town corners.

From the Schools Spectacular, to training school students, to Griffith’s Shakespeare Under the Stars, to a new venture called Exposed, which combines actors, painters and musicians, Peter Fordham’s enthusiasm for the arts knows no bounds.

Janice Harris was choreographer for the OTC’s inaugural 1976 production The Sentimental Bloke and this year’s production of 25th Annual Putnam Spelling Bee will be her 50th production.

She has been a dedicated mentor to dancers and non-dancers alike, instilling in them the confidence to take to the stage with flair.

Some of her more famous sayings include….

“Men should always dance like men … even if you’re wearing a G-String, body stocking, wig and Cat’s make up. ”

“Even if you get it right you should always do it again to prove it wasn’t a fluke.”