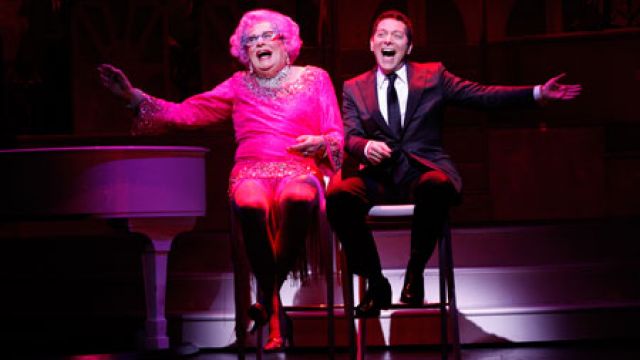 After just two weeks ALL ABOUT ME, Dame Edna and Michael Feinstein's show closed at the Henry Miller Theatre. Expectations were high for the show that was advertised as  1 Megastar, 1 Gigastar, a 12 Piece orchestra, over 40 songs, and 22 ladies lavatories. The latter a reference to the hopelessly inadequate toilet facilities (especially for women) in Broadway theatres. The critics thought the concept (two stars booked into the same theatre at the same time) was tired. They likened it to a 1950s TV variety show. Dame Edna's material was thought to be also tired when she pedaled her old routines, but her contemporary skits were spot-on. They particularly liked the send-up of Beyonce's  Single Ladies (Put a ring on it), which she performed sandwiched between two buffed and built chorus boys. They also liked her put-down of Sondheim in The Ladies Who Lunch in which Edna said she was  not convinced he had written the song because it was  too catchy. The show in its first week could only manage 41% capacity for a weekly take of a dismal $216,425. There were two Playbills for the show, one with Dame Edna on the cover and no mention of Feinstein anywhere, and the other with Feinstein on the cover with no mention of Dame Edna anywhere.