Doing it for the Penguins Dominates Short+Sweet 2011 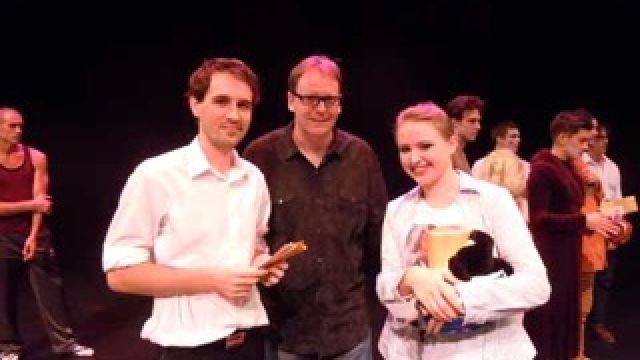 Sydney based writer-director David Bulmer’s green-tinged political satire Doing it for the Penguins has scooped the pool at the Gala Final at NIDA’s Parade Theatre on Saturday night (March 13), winning all of the major awards of ten-minute theatre festival Short+Sweet Sydney 2011.

The play received its award and prizes from NSW Shadow Arts Minister Anthony Roberts, who announced that there would be $1.5 Million in regional funding over the next four years for Short+Sweet if the Coalition is elected in the forthcoming state election. Short+Sweet will receive funds over four years to develop and manage expanded regional and youth programs where 'hub venues' in locations such as Newcastle, Tamworth and Bathurst provide mentoring to smaller regional centres each running their own short form festival programs in Theatre, Music and Dance.

Doing it for Penguins claimed the major award for Best Overall Production, Belmondo Tiles Best Actress and Actor nods for the cast, Elise Fabris and Damien Higginbotham, with the Australian Writer’s Guild award for Best Script and the Sam Gennochio Memorial Best Director Award, named after one of the founders of Short+Sweet, going to David Bulmer.

The judges and audience were in agreement, with Doing it for the Penguins also claiming the People’s Choice Award for the most popular play as voted by audiences during the festival.

The satirical ten minute play follows a State Labor Party staffer (Fabris) who decides to do her bit for the environment and, following the lead of her beloved Kristina Keneally, leave her car at home on World Environment day and take her bike to work. Along the way our well-intentioned but seriously deluded cyclist meets pushy reporters, bored RTA call centre operators, a border collie, angry motorists and 4WDs drivers on their way to private Zumba lessons (all played by the versatile Higginbotham) – each encounter funnier than the next. Until she meets her own personal nemesis - peak hour traffic on King Street, Newtown. The play was given an extra edge by being perfectly timed just before the NSW State Election. 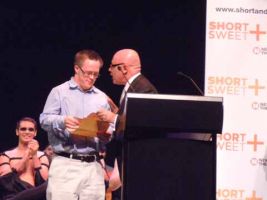 Downs Syndrome actor Gerard O’Dwyer shared the Best Actor Runner-Up in Beautiful (also written by David Bulmer), with Matt Charleston for his portrayal of a man cursed by a super-human sense of smell in Pete Malicki’s monologue, The Devil’s Aftershave. The Best Actress Runner-Up prize went to Sophie Cleary for her performance as Dorothy Parker in USA writer Laurel Ollstein’s, In the Bath.

The Wildcards Winner award, for the overall winning production in the Wildcards, was presented to The Talk Down by Nathan Finger and Richard Clark that qualified for Short+Sweet Sydney as one of the runners-up of the inaugural Short+Sweet Newcastle last year.

In a new award Lydia Kelly, Short+Sweet’s Head Stage Manager was presented with the Spirit of Short+Sweet Award which is awarded to the participating artist, crew member or supporter who best embodied the values and traditions of Short+Sweet during the Festival.