Don’t call me an Understudy Witch … I am a Standby Witch. 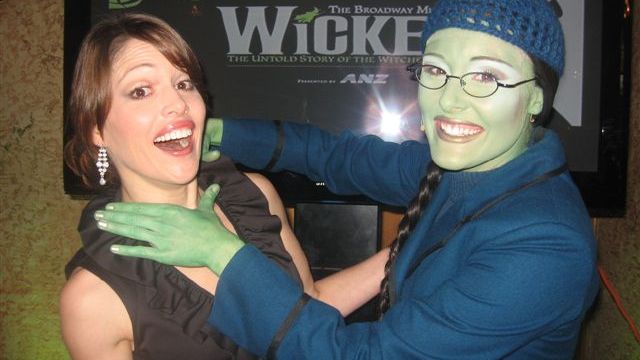 Only a few years after being in chorus of the Gosford Musical Society Jemma Rix is flying high as the standby Green Witch in the Stephen Schwartz musical Wicked which premieres in Sydney on September 12.

Sometimes a reserve needs to take desperate action to get a run on the team. Jemma Rix gave a demonstration to Stage Whispers by placing her green fingers around the neck of Amanda Harrision at the Sydney launch of Wicked.
Amanda Harrison is the number one green witch, Jemma Rix (in green) is number two. But not only is Jemma Rix too nice to harm anyone, she has had plenty of opportunities to fly. During the Melbourne run she has been on stage for the role in one third of the performances. Illness and the demands of the role have given her plenty of opportunities.
“I am not an understudy – I am a standby,” she explained. “An understudy is on stage as part of the chorus – a standby waits backstage to see if they are needed.”
Elephaba, the green witch, is the central character in the show. The musical explores how the misunderstood green-skinned girl grows up to become the notorious Wicked Witch of the West. Jemma compares the demands of the role to being in an opera. But opera singers only do a few shows a week – not eight.
“The role is so hard. If you have a slight vocal strain and keep going you could permanently damage your voice,” she said.
The first time she did the full role was during a tech run in Melbourne.
“This was the most terrifying moment of my life,” she admitted. “I hadn’t been properly rehearsed at all. It was surreal.”
“The hardest part is in Act Two when I have to sprint up stairs and sing the second biggest song of the show,” she said.
On a few occasions Jemma has gone on half way through a show when Amanda has fallen down ill – and yes, sometimes even she has gone down.
“I have an understudy in the chorus, who has also had a few opportunities to do the role,” she said.
It’s been a meteoric rise for the 24 year-old singer. Just a few years ago she was a beauty therapist in the New South Wales Central Coast town of Umina. The highlight of her show business career was being on stage in the chorus of the Gosford Musical Society.
“I did a lot of amateur theatre and had singing and dancing lessons,” she said. “I started going for auditions and scored a role in the monster rock show at Universal Studios in Japan.”
As luck would have it Universal Studios got permission to stage a shortened version of Wicked.
“Someone heard my voice and my tapes were sent to Stephen Schwartz. I was sent to London for an audition and got the part,” she said. “Later Stephen Schwartz came and watched a live performance. I did the show for a year, came home and did heaps of auditions.”
After a long wait she scored the role as the standby green witch.
Now with the Sydney season about to start she’s expecting to have more time to read some books side stage. The number one witch is expecting to be fighting fit to grab the broom at the start of the Sydney season.
But just in case, every night Jemma Rix will be on standby … ready in her green make-up.

Check out our in-depth interview with Jemma Rix.

Wicked played 60 weeks, and 464 performances, at Melbourne’s Regent Theatre, following its Australian Premiere on July 12, 2008 (after playing previews from June 27). The musical took a record advance booking of more than $2.3 million in just three hours on February 12, 2008, then smashed the one-day box office record for any Melbourne theatre on the Monday after it opened, with $1.5 million in ticket sales in a single day.