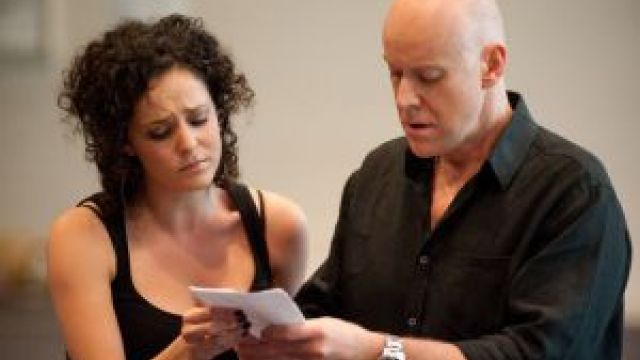 Stage Whispers revealed exclusively on Saturday that Anthony Warlow had injured his leg during the previous night's preview of Dr Zhivago.

In a word - SENSATIONAL.

But first the off stage drama.

I attended on Saturday night. The Producer John Frost came on stage and gave the audience the bad news that Anthony Warlow was injured.

A number cried out in protest. "How Dare You!" said one woman behind me.

The Director Den McAnuff then explained the challenge presented by the leading man being injured after just the second preview.

He said the undertstudy never gets a full run on stage before the opening night, which is why they had to cancel the Friday night preview.

The audience was warned there might be some stops and starts in the performance.

Anthony Warlow then came on stage with a walking stick.

He said that he tore his calf muscle the previous night by just walking across the stage.

He apologised to the audience and urged them to return to see it when he has recovered. "Come and see me in it"

Anthony Warlow is expected to be fit to return to the stage in time for the opening night on Saturday.

His understudy Anton Berezin burned the midnight oil to be prepared for his performance.

I can report that he was flawless, and didn't miss a beat.

Anthony Warlow's recovery is for him to watch how good his understudy is.

The Producer was upbeat. He said Dr Zhivago has already sold 5 million dollars worth of tickets because "Sydneysiders were prepared to give it a go."

Well the official Stage Whispers review will not appear until after opening night on Saturday. We are bound by confidentiality agreements.

All I can say is that Dr Zhivago is a gripping drama with beautiful music.

If you love musicals with a bit of substance you will love this show.

I can see it being a success on Broadway.  I don't think it will be a blockbuster... the dark subject matter and weight of history will not appeal to everyone.

I attended with an agent for musicals from Germany and she was also confident it has a big future in Europe.

The current issue of Stage Whispers includes a CD with two sample songs from the musical. It was particular treat for me to see the context for these songs.

Image: Lucy Maunder and Anthony Warlow in rehearsal for Dr Zhivago The Musical.